What’s so “moderate” about constant warmongering? 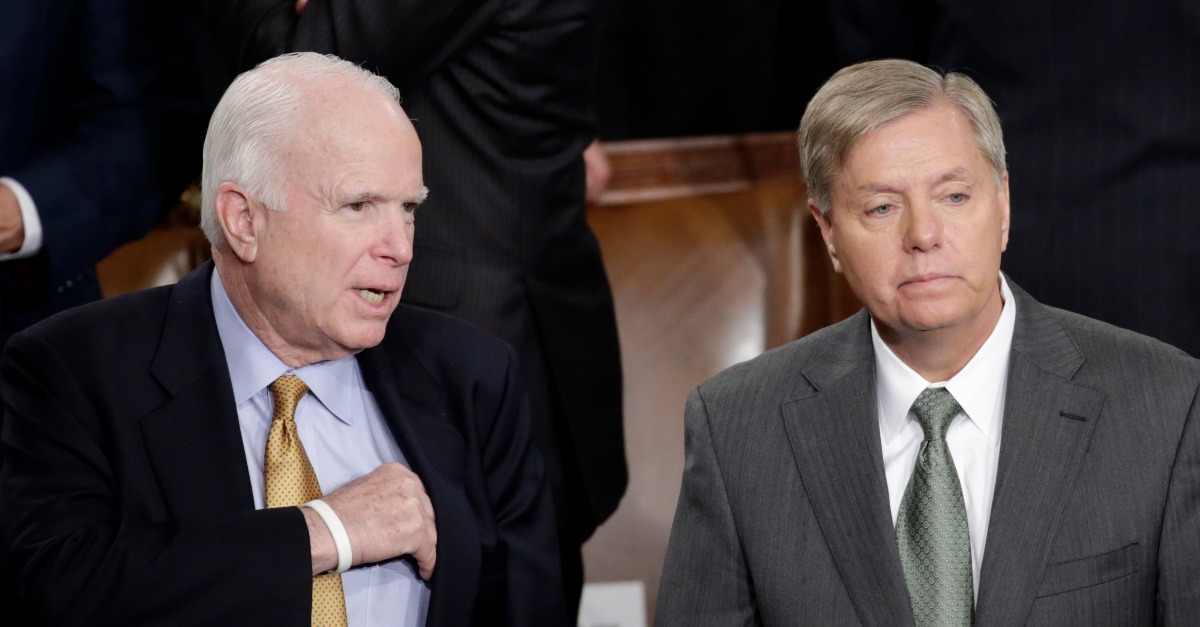 If a Republican lawmaker stands against conservative principles often enough, it’s a safe bet he’ll earn the label “moderate” — or maybe even “maverick” if he gets lucky.

Senators Lindsey Graham and John McCain are great examples of this. The two are frequently referred to as “moderates,” which is pretty astonishing when you look at how frequently and openly they’ve campaigned for costly and unnecessary American military interventions overseas.

Let’s back up. Just last week, McCain restored the luster to his “maverick” crown by siding with all the Senate Democrats and voting against the “skinny repeal” of Obamacare. The Arizona senator is frequently referred to as a “moderate” as well since he tends to be less conservative on domestic policy than his colleagues.

It wasn’t too long ago that Graham’s brief, ill-fated run for the GOP presidential nod in 2016 was kindly dubbed his “moderate primal scream” by the Washington Post. Predictably, he received this moniker for challenging Senator Ted Cruz’s position on abortion exemptions, and not for his bellicose and combative foreign policy positions, which have all the subtlety and range of a middle-school band practice.

Like a Western European nation invading Russia during winter, Graham and McCain’s “war first, last, and always” stance has consistently resulted in disaster. But their constant inaccuracy has not made them shyer or their rhetoric less sharp.

Graham and McCain were early and unyielding proponents of sending tens of thousands of U.S. troops into Syria, and, failing that, sending arms to “moderate” Syrian rebels under now-defunct CIA and Pentagon initiatives. Even after it became clear that many of the weapons were ending up in the hands of al-Qaeda and ISIS, and that a $500 million DOD training program had produced only five trained fighters, the two were seen lamenting the end of the policy in the media. Graham called the cancelation of the unsuccessful CIA program “complete capitulation” to Syrian president Bashar al Assad, and to Russia and Iran.

Yet for some reason, many in the media are still content to dub these two “moderates,” ignoring their very immoderate determination to involve the United States in conflicts abroad.

As recently as Tuesday, Graham said there would be war between the United States and North Korea if the hermit nation continued to aim intercontinental ballistic missiles at North America. “If there’s going to be a war to stop [Kim Jong-un], it will be over there. If thousands die, they’re going to die over there. They’re not going to die here. And [Trump] has told me that to my face,” said Graham. “And that may be provocative, but not really.”

RELATED: Paul slams McCain and Graham on Syria: “They have learned nothing from our history in the Middle East”

Although military experts say there are no good options for militarily stopping North Korea without endangering its neighbors, just as with Syria, Graham never lets facts get in the way of a good war (or two, or three). The experts are “wrong,” Graham insists. “There is a military option to destroy North Korea’s program and North Korea itself.” Not the North Korean regime: “North Korea itself.”

Of course, a war in North Korea would probably ensnare China and South Korea and claim millions of lives, but that’s a minor detail.

So here’s my question: what’s so moderate or maverick-y about constant warmongering?