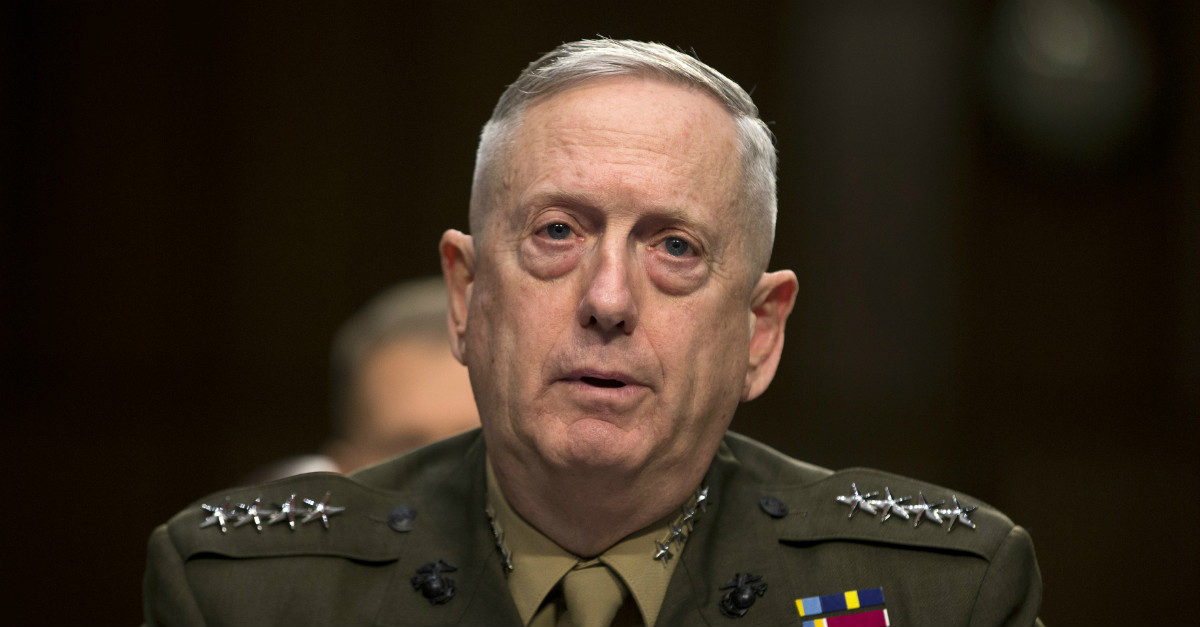 One of President Trump?s very first directives upon entering office was ordering his defense secretary, James Mattis to come back within 30 days with a comprehensive plan to defeat the Islamic State. That deadline is now here and Secretary Mattis reportedly handed the first draft of his plan to the White House on Monday.

It’s a document that’s sure to be more of a general outline of the options currently available than a detailed, step-by-step strategy for wiping out the group. But that doesn?t mean the Pentagon has been taking this job lightly. According to public reports, the anti-ISIS plan that the Trump administration has asked for will include a broad range of opinions from across the inter-agency on everything from how best to squeeze ISIS?s finances to the long-term work of making ISIS?s propaganda efforts less effective.

RELATED: James Mattis was right to call out our NATO partners, but he needs to go even further

Average Joes like us won?t be privy to all of the information. (Although who knows? Just wait for the leaks to come out.) But there are several recommendations that we can be fairly confident will be included. Here are some of them:

General Joseph Votel, the commander of CENTCOM, has suggested that additional U.S. personnel and resources may be needed in order to shore up the offensive capability of the Kurdish and Arab forces who continue to isolate ISIS?s supply lines around Raqqa, the group’s self-styled capital in Syria. The Syrian Democratic Forces, which have received ammunition and air cover from the United States for well over a year now, have made steady progress on the ground and have killed a whole lot of ISIS fighters in the process. The battle for Raqqa, however, will be an experience that the SDF hasn?t faced before: house-to-house fighting in an urban environment that ISIS has had over three years to prepare for. More U.S. special operations forces and advisors in the immediate area could ? I stress, could ? make the liberation of Raqqa easier.

Greater authority for the generals:

In the ideal war scenario, U.S. military officials are given all of the authority, equipment and troops they need to make decisions quickly and run the war the way they believe is most appropriate. So naturally this is a recommendation sure to find its way to Trump’s desk. Mattis will want both more power for the generals running the war and a faster decision-making process that doesn’t require them to check in with Washington every hour. Trump is far more likely to grant that authority than Barack Obama ever was, given how enamored Trump seems to be with men in uniform.

In the fall of 2014, the Kurds were on their last legs, surrounded in Kobane by a resurgent ISIS, a few city districts away from being wiped out completely. More than two years later, it?s the Kurds who have become the most effective anti-ISIS combatants. The situation is now almost reversed ? ISIS territory is shrinking and the jihadists are forced to worry about defending what they have instead of expanding their caliphate, while the Kurds continue to encroach. The Pentagon won?t want to mess with an arrangement that is working, so that support to Kurdish units is likely to continue in some fashion. Sending them heavier weapons like anti-tank missiles, armored personnel carriers, and perhaps even artillery systems could be high on Mattis’s list. The question, of course, is how Turkey would respond to such a move, given that the government there is battling a Kurdish uprising.

Trump has spoken in multiple interviews about establishing safe zones in northern Syria in order to stop the flow of refugees into Europe. Protecting civilians from the violence is a worthy humanitarian objective, but it?s not likely to help the counter-ISIS campaign very much unless local anti-ISIS fighters are allowed to use those zones to recruit, train and plan operations. Still, Trump has talked about safe zones as an option, so they’ll probably be included in the Pentagon’s plan.

RELATED: Congress must get a say in whether President Trump sends more troops to Syria

After what was probably the toughest month of his life, Donald Trump could use a win right about now. With ISIS on the ropes, it’s very possible that victory could come over one of the most feared terrorist groups in history.