Congressional Republicans are having a tough time of it at town halls in their home districts this month.

In Tennessee, angry constituents told Rep. Marsha Blackburn she should “do better,” “tell the truth” and stop assuming the people she represents are “stupid.”

In Louisiana, Sen. Bill Cassidy was momentarily drowned out by chants of “do your job.”

In Arkansas, constituents told Sen. Tom Cotton they would be “dead and homeless” without the Affordable Care Act he seeks to repeal, demanding to know when he would stop being a “rubber stamp” for the Trump White House.

RELATED: Houstonians to Cruz: We Need to Talk

In Florida, Sen. Marco Rubio did not hold the town hall his constituents wanted, so they live-streamed an event where they complained to a life-sized, cardboard cutout of their absent senator.

In Iowa, a constituent gave Sen. Chuck Grassley a bottle of Tums, a humorous warning of vehement local opposition to come; and Sen. Joni Ernst faced boos and infuriated a town hall crowd by leaving early in response to constituent anger.

Following these reports of constituent anger — plus many more around the country, even in safe GOP districts — Republicans have taken two very different paths.

On the one hand, there’s the sort of response we’ve seen from the Trump White House. Vice President Mike Pence on Wednesday attributed all the frustration and anger expressed at GOP town halls to “liberal activists” riling up otherwise contented local crowds. White House Press Secretary Sean Spicer offered a similar message the same day, suggesting town hall anger is a “hybrid” creature. “I think some people are clearly upset,” he said, “but there is a bit of professional protester, manufactured base in there.” And counselor to the president Kellyanne Conway on Thursday likewise blamed the town hall turmoil on bitter Democrats who “bellyache and moan and complain about most things” because they did not get their way in the presidential election.

On the other hand, there’s the response of responsible elected officials who are willing to be honest with and about the people they pledged to represent.

Rep. Mark Sanford of South Carolina is in this camp. “This wasn’t an artificial crowd,” he said Wednesday on CNN of his most recent town hall. Though Sanford did notice some people from outside his district, “nobody that I was aware of [was] from outside” his state, he said. “The bulk of people were local, they were from the district, they were passionate about what they believed,” Sanford graciously added. “It was real people with real concerns in terms of what came next on healthcare.”

And so is Rep. Justin Amash of Michigan, who has been able to constructively talk with angry crowds in his district by eschewing partisanship, booking bigger and bigger venues to ensure everyone who wants to attend can make it, and doing his best to answer tough questions.

Amash has no qualms about telling constituents when he does not agree with their view and will not do what they ask. “I am answering the question,” he said at a recent event when attendees complained he wasn’t answering a question the way they wanted. “I said I would not support that provision. I would not.” That’s fair. It’s not what those constituents wanted, but it’s honest and fair.

“Members of Congress must be willing to engage with the people we represent—unscreened and unfiltered—to discuss ideas and learn,” he tweeted this week. That attitude is why Amash’s town halls are functional, if tense, while other Republicans are holding virtual meetings and refusing to meet in person with constituents to avoid confrontation.

Not to put to fine a point on it, but members of Congress too chicken to meet with their constituents in person should not be in Congress. And so what if some of those angry constituents happen to be Democratic activists? If they live in the district, they have just as much a right to be heard.

A town hall is not a campaign event. It is not a place for officials to get compliments and applause and feel good about themselves. It is a place to hear constituent requests and concerns.

Members of Congress don’t have to bow to all those requests, but it’s not too much to ask that they listen. 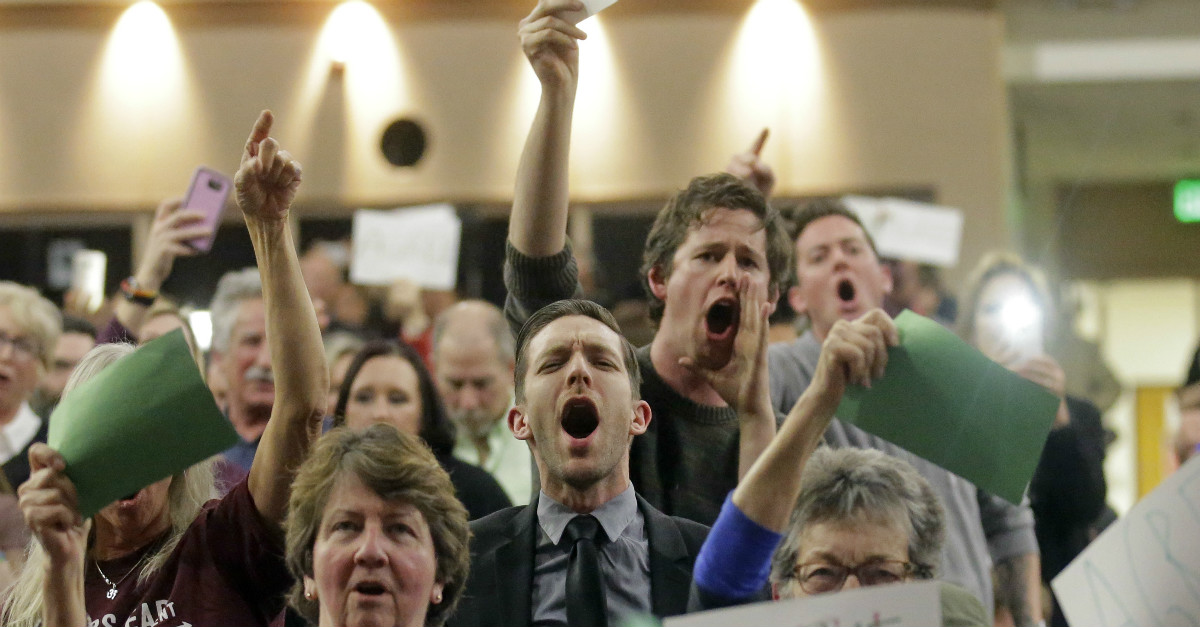