The U.S. government that spied on Martin Luther King, Jr. has no problem spying on you too 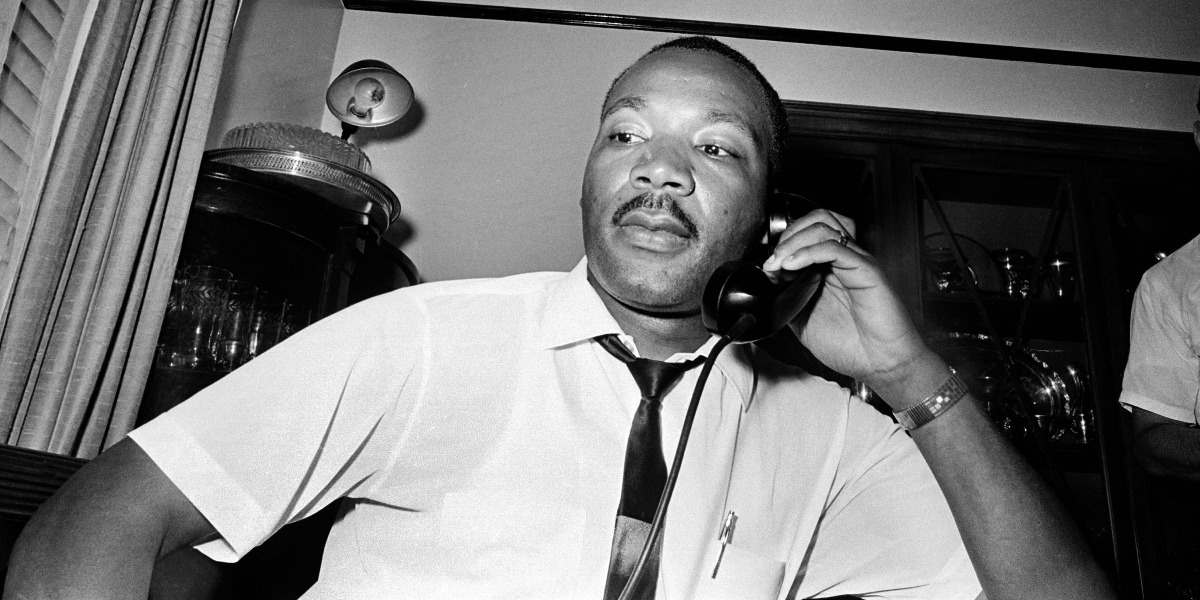 AP Photo
Dr. Martin Luther King, Jr. is on the phone in St. Augustine, Fla., to Washington, after a riot on the streets of St. Augustine, June 25, 1964, when civil rights demonstrators were attacked by white segregationists during a nighttime march. King was requesting help from U.S. Marshals (AP Photo)

“This is about foreign terrorists on foreign soil. That’s what this is about.”

These were the words of House Speaker Paul Ryan on Thursday as he urged members to renew and increase unwarranted mass government surveillance powers, which the House did pass. Opponents of this legislation, Section 702 of the FISA Amendments Act, believed it was illegal under the Fourth Amendment and would lead to increased government abuse of U.S. citizens.

Ryan wanted to assure everyone it wouldn’t lead to abuse, that only foreign terrorists would be spied on. But government officials always assure us their snooping will only be used on intended targets. They always say we can trust them, promise that boundaries won’t be overstepped, and that innocent people won’t be harmed.

And virtually every time they are wrong.

Government officials once said NSA surveillance in no way collected the private data of American citizens. Thanks to Edward Snowden, in 2013 we learned that the U.S. government was collecting everyone’s information en masse. Government promised that the 2001 Patriot Act passed after 9/11 would only be used to target Islamic terrorists. Today, it is used more to fight the war on drugs and other criminal activities that have little to no connection to terrorism.

This kind of abuse is nothing new. In the mid-20th century, the NSA and FBI would spy without a warrant on suspected “domestic enemies” of the U.S.

Yes, as America celebrates the most cherished hero of the 1960s civil rights struggle, there was a time when our government viewed King not as a champion of racial equality but the “most dangerous Negro of the future of this nation,” as the FBI called him.

In 2017, the ACLU’s Noa Yachot gave a synopsis of U.S. surveillance of King, and how they used the Communist threat as an excuse to spy on citizens:

In 1956, (FBI Director, J. Edgar Hoover) approved arguably the FBI’s most infamous and lawless program, known as COINTELPRO. The program targeted a diverse array of activists, inflating a Communist threat to justify the agency’s dirty tactics. Most famous among the FBI’s targets was Martin Luther King, Jr., who the agency stalked through wiretaps, bugs, spies, and informants, collecting embarrassing information about his sex life and possibly even urging him to commit suicide. Hoover personally spearheaded this harassment campaign on the grounds that King was a Communist who posed a particularly “dangerous” threat to “national security.”

The FBI tracked King’s every move, believing he was part of a communist conspiracy. Government officials deemed him a threat.

When the state can categorize you as being part of a group it considers a threat, real or imagined, the latter being the case concerning King, that’s all the justification government needs to ignore your constitutional rights. The NSA and FBI expanded the threat of communism to include King. Conservatives spent most of the last decade worrying about President Barack’s power to target political opponents, whether Tea Party activists or journalists. Today, many Americans worry about that same kind of power in the hands of President Donald Trump.

They should worry. That King was once targeted is a stark reminder of the dangerous nature of unrestrained state power. But what about other innocent citizens less famous than King? What about Brandon Mayfield, the Oregon attorney who was surveilled without a warrant under the Patriot Act, falsely linked with terrorism and arrested and held without charge? What about Hooshang Amirahmadi, a Muslim American Rutgers professor who was surveilled by the NSA due to his religious beliefs?

These are just two victims. What about the billions of others?

The type of government snooping used against King and so many others will again be part of the news cycle this week when the FISA Amendments Act passed by the House last week likely moves on to the Senate. Pro-privacy and Fourth Amendment advocate Senators Rand Paul (R-Ky.) and Ron Wyden (D-Ore.) have vowed to filibuster if it does not contain due process reforms that would protect innocent parties (spoiler alert: it won’t).

But like Paul Ryan in the House, expect both Republican and Democrat leaders to assure the American people that the government would never undermine the Constitution and that they will only go after the bad guys.

The problem is—it is always the problem—who, exactly, will be included in the category of “bad guys?” One day, it could be me. It could be you.

Once upon a time, it was Martin Luther King, Jr., too.