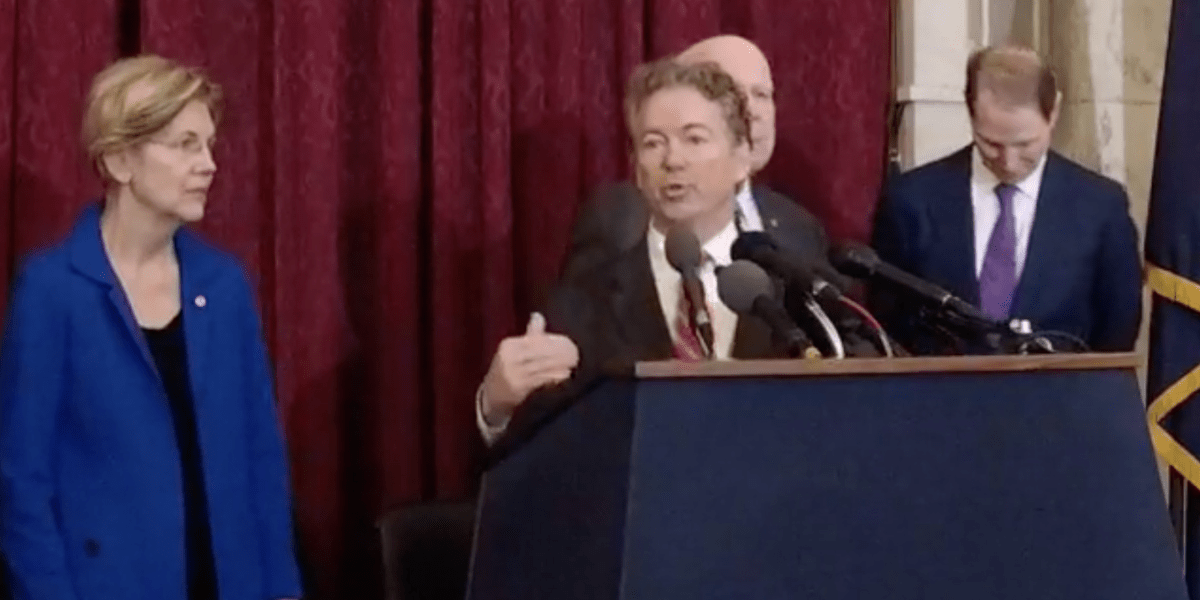 Senator Rand Paul (R-KY) held a bipartisan press conference on Tuesday to announce that the group of senators in attendance intend to filibuster long-term reauthorization of Section 702 of the Foreign Intelligence Surveillance Act (FISA).

The bipartisan press conference-—which focused on protecting the Fourth Amendment rights of Americans—was viewable via a Facebook livestream.

Last week, the House of Representatives passed legislation reauthorizing the FISA in a 256-164 vote. The reauthorization now goes to the Senate for a vote.

Under Section 702 of the FISA Amendments Act, the FBI may conduct “backdoor” searches of American communications with foreign targets of suspicion without a warrant.

Paul has been adamant in his opposition to long-term reauthorization, promising to filibuster any legislation that does not require a warrant to spy on American citizens under FISA. He is no stranger to filibustering in defense of the Bill of Rights, conducting a 10-hour filibuster over NSA spying programs in 2015.

“We stand united in terms of fighting terrorists on foreign soil,” Wyden said. “702 is a whole lot broader,” he continued, adding that it allows the government to intercept “practically anything” that relates to foreign affairs.

Giving examples as to how broad FISA’s reach is, Wyden said a Midwestern businessman talking to foreign business acquaintances could become a warrantless surveillance target. Wyden added that a U.S. servicemember talking to foreign friends he or she met while they were deployed overseas could also be surveilled.

Warren concurred, saying, “The United States should not be in the business of warrantless searches of American citizens.” She also called for reform of American intelligence that protects Americans’ privacy and the addition of more accountability to the program.

“Opposing warrantless surveillance is not a partisan issue,” she continued.

While Warren said the idea behind Section 702 was admirable, she added that the current methods used destroy the privacy rights of Americans.

All of the senators agreed that Section 702 is important, but the power it provides has been abused. All also agreed to support Wyden’s USA Rights Act.

Together, Paul and Wyden have frequently been the bipartisan duo most opposed to the warrantless, mass surveillance, introducing the USA Rights Act in the Senate in October 2017. Their bill sought to end warrantless backdoor searches of Americans’ communications that are “routinely swept up under a program designed to spy on foreign targets.”

“Let’s vote to protect Americans,” Leahy said, adding that early Americans fought a Revolution to protect inalienable rights such as the right to privacy.

Just finished up a press conference with @RonWyden @RandPaul @SenWarren & @SteveDaines to talk about how we will try to protect American’s private communications when Sec 702 reauthorization is introduced on the Senate Floor tonight. pic.twitter.com/QjBauIEBxk

Paul said the reforms in the current bill are inadequate, adding that the senators insist on an open debate on more substantial reforms.

He added that if intelligence is to be collected from American citizens, the government should “get a warrant from a judge.”

Paul said he has not spoken to President Trump about FISA reform, adding that he does not believe Trump has a specific position on the issue, but that he would likely be “horrified” at the idea of warrantless surveillance on American citizens.

“Madison said that men are not angels,” Paul concluded. “That’s why we need rules for the government.”