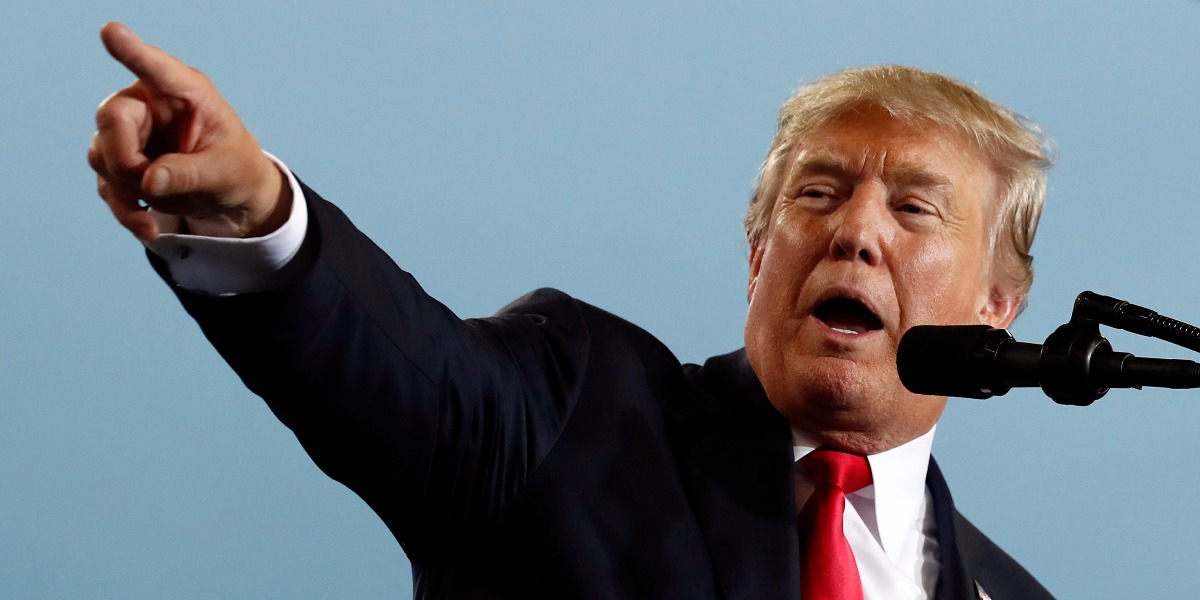 AP Photo/Alex Brandon
In this Oct. 11, 2017, photo, President Donald Trump speaks about tax reform during an event at the Harrisburg International Airport in Middletown, Pa. Trump's tax overhaul package is getting resistance from an unusual alliance of interests opposed to his plans to scrap the federal deduction for state and local taxes. (AP Photo/Alex Brandon)

“With all of the Fake News coming out of NBC and the Networks, at what point is it appropriate to challenge their License? Bad for country!” he wrote.

With all of the Fake News coming out of NBC and the Networks, at what point is it appropriate to challenge their License? Bad for country!

Later that evening, he sent out another post along similar lines.

“Network news has become so partisan, distorted and fake that licenses must be challenged and, if appropriate, revoked. Not fair to public!”

Network news has become so partisan, distorted and fake that licenses must be challenged and, if appropriate, revoked. Not fair to public!

No one is surprised, at this point, to see Trump raging about the press, but this idea of revoking network licenses is a new one from him. It is true that in the past Trump liked to talk about “opening up libel laws,” but as I’ve explained at The Week, he has no authority in that matter:

Defamation is overwhelmingly legislated at the state level and the feds have no constitutional claim to governance on this issue. This means that even as president, Trump can’t “open up” anything. He could, I suppose, get Congress to pass some sort of federal incentive to try to convince states to change their laws, but it is doubtful Congress would be enthusiastic about such a proposal. And even if it did pass, does anyone believe media-heavy states like New York and California would choose to comply?

So now he’s turned to licenses. The good news here is that again, Trump is powerless for the simple reason, as the Washington Post’s Erik Wemple noted on Twitter, that this is not how the FCC operates:

In re: @realdonaldtrump threat against NBC "license," here's what the FCC's website has to say: https://t.co/Y8sRxxyObF pic.twitter.com/nW00hXvPC3

In other words, NBC isn’t going away any time soon ? not by Trump’s hand, anyway.

But the emptiness of Trump’s threat does not undercut the gravity of this situation. The fact that Trump thinks he can credibly make this threat is deeply troubling, even if you share his distaste for NBC and the news media more broadly.

The situation has a lot in common with Trump’s attacks on pro athletes who kneel during the national anthem to protest policy brutality. As I observed about that debacle, it’s one thing for a private organization to regulate its employees’ political speech on the job, or even for a private citizen to object to other private citizens’ protests.

But it is a very different thing indeed to have the foremost representative of the federal government acting in his official capacity as president to recommend suppression of Americans? free speech.

Likewise, it’s one thing for you or I to say NBC sucks and shouldn’t be on air. It is a very different thing for Trump as president to make public statements pushing for this media outlet to be silenced.

As with the NFL feud, presidential tweets aren?t federal policy, but the president saying NBC should be forcibly taken off the air by the federal government is deeply suspect in light of the First Amendment’s guarantee of a free press.

I won’t go so far as to say what Trump is doing is an outright violation of the Constitution, but he is at the very least playing with fire. Calling for a news station to be silenced is the province of tinpot dictators, not the elected leader of a free republic who serves at the pleasure of the citizens and is bound by rule of law. Looking at Trump’s behavior, you might start to wonder which of those options is a better description of his office.