What do you do with a problem like Roy Moore? 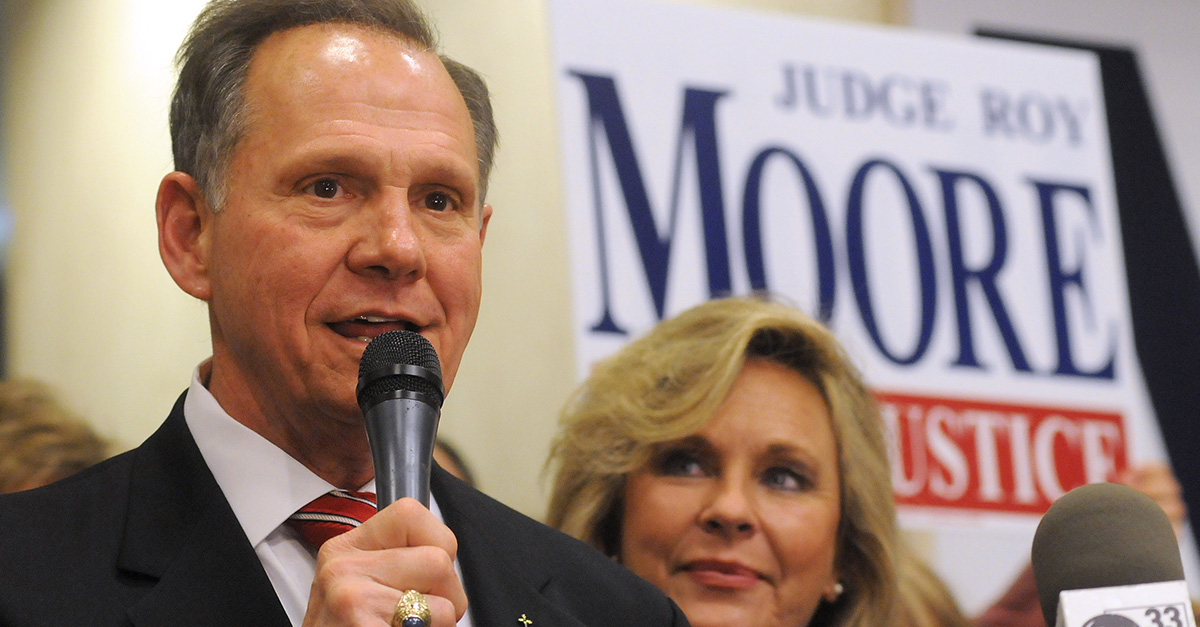 AP Photo/David Bundy, File
FILE - In this Tuesday, Nov. 6, 2012 file photo, Roy Moore, candidate for Alabama Supreme Court chief justice, speaks to the audience as wife Kayla looks on at his election party in Montgomery, Ala., on election night. Chief Justice Moore, known for fighting to display the Ten Commandments in a judicial building, has written to all 50 governors urging them to support a federal constitutional amendment defining marriage as between only a man and a woman. (AP Photo/David Bundy, File)

The allegations and evidence against Senate candidate Roy Moore are piling up to the point of indefensibility. To the Washington Post’s extensively sourced story accusing him of misconduct toward girls as young as 14, the past few days have added news of an additional accuser and a report from a retired police officer saying Moore was unofficially banned from a mall for creeping on teenage girls.

Prominent Republicans are increasingly unwilling to go down with this ship — as Marc Short, the White House director of legislative affairs, put it, “There’s no Senate seat more important than the notion of child pedophilia” — but there are still exceptions. On Monday, for example, Rep. Mo Brooks (R-Ala.) said he’s sticking with Moore for the sake of his political agenda.

RELATED: Alabamians who lived in same town as Roy Moore went on record to talk about the last 30 years

That contrast has me thinking about our broader national conversation on how to deal with seriously flawed public figures, a debate fueled by Moore as well the cascade of sexual assault charges made against people like Harvey Weinstein, plus the Confederate monuments controversy. Here are three considerations I suggest to shed some light on an overheated topic.

First, we should examine the accused person’s primary contribution, the work for which they are best known. Is this person’s contribution to their field or society at large so good and valuable that we feel compelled to honor it despite their confirmed or alleged misdeeds?

In the Confederate statues debate, some monument defenders say it’s a slippery slope from taking down a statue of Robert E. Lee to toppling Thomas Jefferson. The obvious answer is to distinguish between negative and positive contributions: Jefferson we remember (ideally with a hefty helping of historical context) in spite of his disgraceful involvement in slavery; Lee we remember because of it. That difference matters.

With contemporary figures, we can ask the same question. This is inherently difficult to judge without the perspective brought by the passage of time, but if we can’t immediately think of a contribution that might plausibly pass muster, the answer is probably “no.” In Moore’s case, what contribution justifies elevating him to the U.S. Senate despite these credible, troubling allegations? Serving as chief justice of the Alabama Supreme Court is impressive, but it is not a Declaration of Independence-level achievement.

Next, we ought to consider the connection between the wrongs alleged and the honor proposed.

For example, Politico notes that President Franklin D. Roosevelt built a resort in Georgia “to care for people stricken by polio,” personally paying for patients who could not afford treatment. FDR also ordered the unjust and inhumane internment of Japanese Americans during World War II. It could be appropriate to honor him with a statue at a polio treatment center, but it would be deeply inappropriate to put the very same statue in San Francisco’s Japantown district because of the connection between FDR and Japantown’s history.

This consideration is even more important if the person in question in still alive and thus capable of committing more wrongs. With Moore, there’s reason to believe he used his positions of power in lower political offices to silence his alleged victims. One of Moore’s accusers said that while he sexually assaulted her, he told her, “You’re just a child. I am the district attorney of Etowah County, and if you tell anyone about this, no one will ever believe you.”

Given this connection between Moore’s alleged misconduct and his possession of political power, the risk of giving him a more powerful and prestigious political position should be evident. This, to me, may be the most worrisome aspect of the fact that some people still want Moore to win his race. It goes beyond glossing over likely past crimes and into facilitating any new ones Moore’s newfound infamy fails to preclude.

RARE POV: Right and left always excuse the worst behavior in politicians so long as he’s “their guy”

Finally, we must inspect our own political loyalties and how they color our assessment of any public figure, historical or contemporary. It is human nature to want our heroes and allies to be free of hypocrisy and other uncomfortable complexity. That is almost never the case.

Just as we might want to downplay the severity of historical offenses from figures like Jefferson or FDR because we admire their contributions, so we may be tempted to dismiss accusations about contemporary ideological allies because they are politically unwelcome. This is a dangerous and unethical game to play.

If Moore is innocent, my hope is his name is fully cleared. But if he is not, my hope is Alabama Republicans won’t let politics distract them from what’s right. No political win could possibly be worth it.