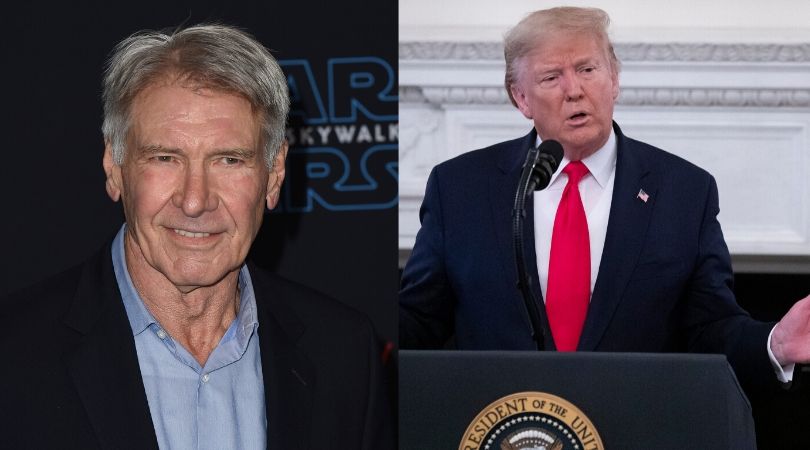 It looks like Harrison Ford page from George Lopez’s book, and has expressed his true feelings for President Donald Trump on Jimmy Kimmel Live! While promoting his new movie, The Call of the Wild on Jimmy Kimmel Live!, Kimmel showed the 77-year-old actor a poster featuring a quote attributed to Trump, among them “That was a perfect call.” The puns are said to be a reference to the president’s call with Ukrainian President Volodymyr Zelensky which prompted a recent impeachment investigation.

The Hollywood actor began to laugh at the fake review poster while saying, “that’s the first thing that son of a bitch has done for me, ever.” Ford then took a further swipe at the president when Kimmel mentioned fellow talk show guest “Science Bob” Pflugfelder. The Star Wars actor noted, “Speaking of science … out the door. We don’t believe in science anymore.”

Ford has been open about his political leaning in the pas, referring to himself as a  “lifelong Democrat.” Just last week while promoting the movie in Mexico City, Mexico, Ford spoke about climate change and immigration, not directly naming President Trump. The actor, according to the HuffPost, said that “science is being denigrated … science is being ridiculed by people in ideological campgrounds. They are refusing the wisdom, the discipline of science in favor of a political point of view and that has to stop.” The actor also noted that he considered the threat of the natural world as the biggest threat to humanity.

In regard to immigration, the Indiana Jones actor added the US needs to invite people into the county, and not keep them out. “This is the history of America, it depends on immigration.” On Kimmel this week, Ford also discussed his conclusion to the iconic Han Solo in Star Wars, working as a carpenter prior to this acting career, and how he contributed all-time low Oscar viewership by not watching the popular award show.

When both Han Solo and Luke Skywalker come for you, you know you’ve fucked up. https://t.co/dahRAxRTX9