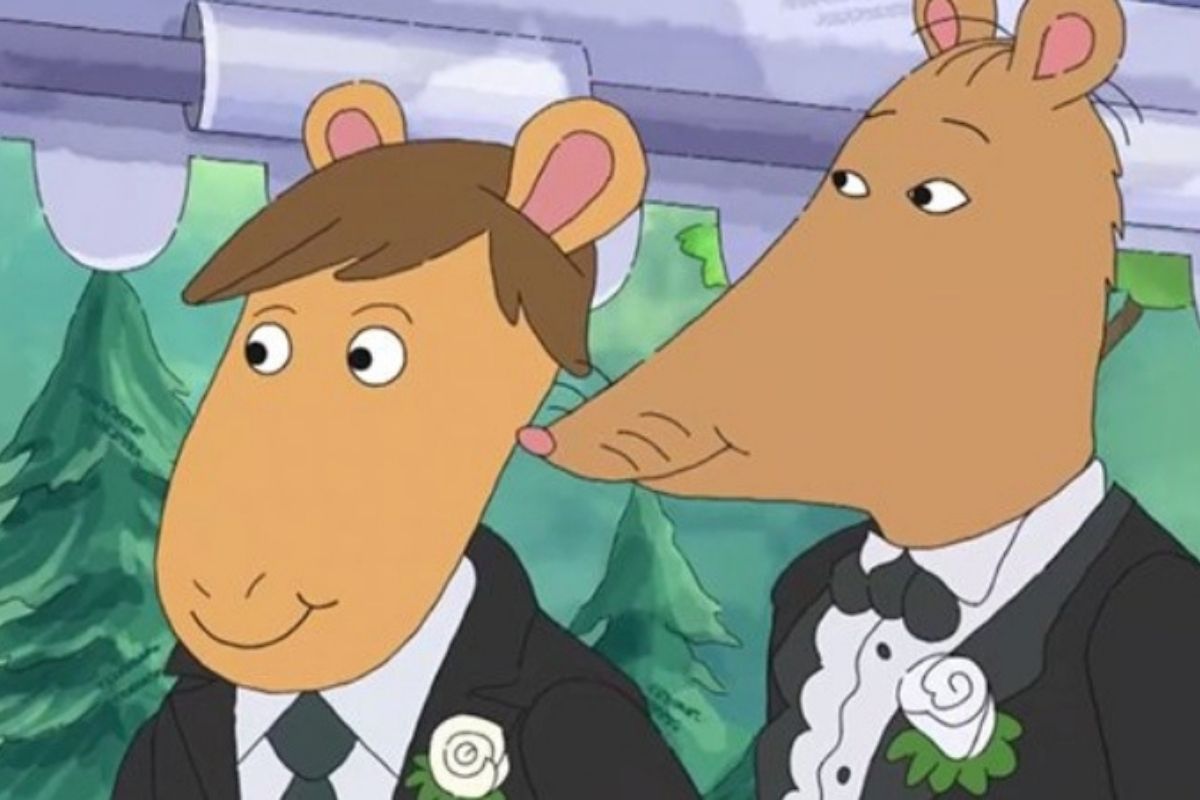 It looks like congratulations are in order for one of the cutest characters of PBS Kids’ Arthur. It’s been two years since Mr. Ratburn surprised us all by getting married…to another man! Yes, the show’s 22nd season premiere started off with a beautiful wedding, and social media is losing its mind! The episode, titled “Mr. Rat Runner and the Special Someone,” starred Jane Lynch as a special guest, and aired on Monday, May 13, 2019. The episode caused quite a bit of shock and ecstatic reactions from those who grew up with the show.

The show began with Arthur and his friends discovering that our favorite teacher, Mr. Ratburn, is engaged. The group of friends, who seem to miraculously still be 8 years old despite them being on season 22, find it difficult to believe that teachers have a life outside of school. The group then begins to spy on their third-grade teacher and learn about his future spouse.

During their investigation, they see Mr. Ratburn having lunch with a woman, and overhear his lunch partner, played by Lynch, saying he was “too soft” and “has to toughen up.” Shocked at her words, the kids are determined to prevent the teacher from marrying the woman and show up at the wedding prepared to object to the nuptials.

But, to their (and our) surprise, the show gives us a big big plot twist! The woman they saw at the lunch is actually Mr. Ratburn’s sister and not his Fiancée. The group quickly discovers his Fiancé is actually a man named Patrick. So, seeing how happy the couple looks together, the group decide to take a step back. Safe to say the internet went wild, mostly because it has been so long since the show first hit our screens, 1996 to be exact, and they never addressed his sexuality.

PSA: Mr. Ratburn from "Arthur" is gay. Do you know how amazing it is that someone who's been on the show from the start, someone who's a main character, is openly gay and getting married on a kids show? PBS Kids really is that bitch.
Plus, all his students are at his wedding! :') pic.twitter.com/aaxGwTE9is

Several Twitter users praised “Arthur” for making Mr. Raburn’s sexuality clear, instead of hinting it just like other programs tend to do. This isn’t the first time “Arthur” features a gay character. In 2005, an episode of the show’s spinoff, “Postcards from Buster,” the Buster the rabbit visits Vermont to learn about maple sugar. On his way, he meets several children with lesbian moms. Unfortunately, back then PBS chose not to air it on more than 300 affiliates, saying the “presence of a couple headed by two mothers would not be an appropriate curricular purpose that PBS should provide.”

Moving 14 years forward, it still isn’t common for children’s shows to feature gay characters, so much so that it becomes headline news when someone comes out on one, like in this case. But what TV Networks need to understand is that having characters such as Mr. Ratburn not only shows children that they will be accepted with whatever sexuality they identify with, but can give characters like his a chance to be the “norm” they should be, and not the exception.

It turns out Arthur is more courageous and explicit than Avengers: Endgame when it comes to LGBTQ2 lives and storylines. Congrats Mr. Ratburn! Your move, Marvel…. https://t.co/eq99SerHaC

So yeah, I am all for this. Continue rocking it “Arthur” because you are killing it in the TV world! Thank you for creating a wedding that illustrated how far both the TV audience, and TV itself have come by treating the event as a joyous celebration of a happy relationship. Safe to say, the viewers did too.

Congratulations, to the beloved teacher Mr. Ratburn and his new Husband! Oh, and you can click here if you want to see the episode, PBS has you covered!

Editor’s Note: This article was originally published May 15, 2019.