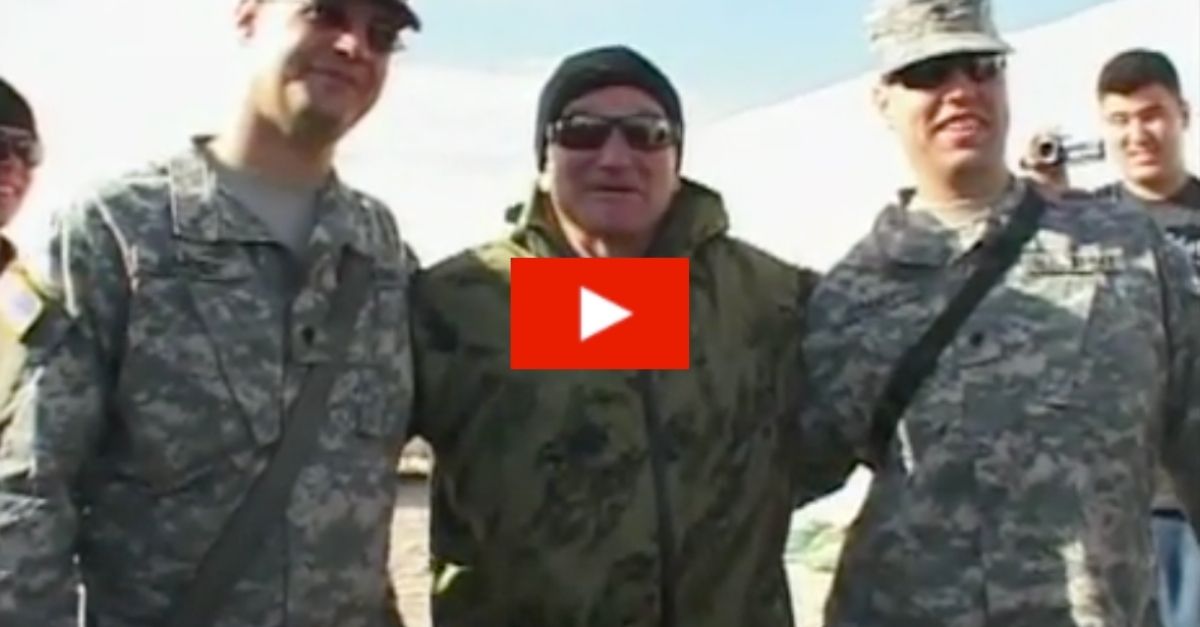 Today, on July 21, the beloved comedian Robin Williams would’ve been 69-years-old. The favorite actor and comedian will long be remembered for his father-like attributes and his wholesomely, witty humor. The characters he played in the past will always be tied legendarily to how he portrayed them.

In 2007, Williams was doing a comedy show at Camp Arifjan in Kuwait as part of a USO tour for U.S. service members. With the U.S. troops fighting in The Iraqi War, this stand up was probably what they needed. And only Williams could use his talents in uplifting others and putting a smile on their faces while also showing respect for those who were serving in the United States military.

As those at the camp were ready to go to Iraq or support other troops going there, Williams was the expert comic relief much needed. Only someone as good as he was could improvise with what happened during his performance. In the middle of his skit, Williams was suddenly interrupted by a trumpet sound, and his reaction to it was perfect.

The trumpet sound is a military tradition called “Retreat,” that signals U.S. troops know the American flag was coming down at the end of the day. So when Williams was interrupted, not only was he startled, but he was only surprised to see all the big crowd of U.S. troops get up from their seats and turn their backs to him.

Paul Szoldra for Business Insider, recalled this innocently hilarious but amazing moment after Williams took his own life in August 2014,

“At its sound the custom is to face the music, stand at attention, and salute. In this case, Williams is left onstage, watching thousands of soldiers turn away from him, and he has no idea why. But in the video that was later released, we see the comedian, brilliant for his improvisational skills, realize that this moment is a special one. He is not a comedian. He is not a big-name celebrity. He is just some guy on a stage, and that music, and that flag coming down, is much more important.”

And that’s exactly what you can see in the video. Williams is seen suddenly realizing the importance of why everyone has turned around and follows suit in bowing his head and staying silent as the trumpet finishes. When the moment of respectful silence passes, Williams picks up right where he left off in making the crowd burst out in laughter, but in the most appropriate way.

“I’ve never had an entire audience just go, forget you!” he says, as he turns around and faces his back to the crowd, hilariously mimicking his own point of view of what just happened. Williams made such a difference that day in Kuwait for the men and women fighting for America, and his legacy will always be carried out and remembered in years to come.

Watch: Robin Williams as the American Flag Will Make You Smile