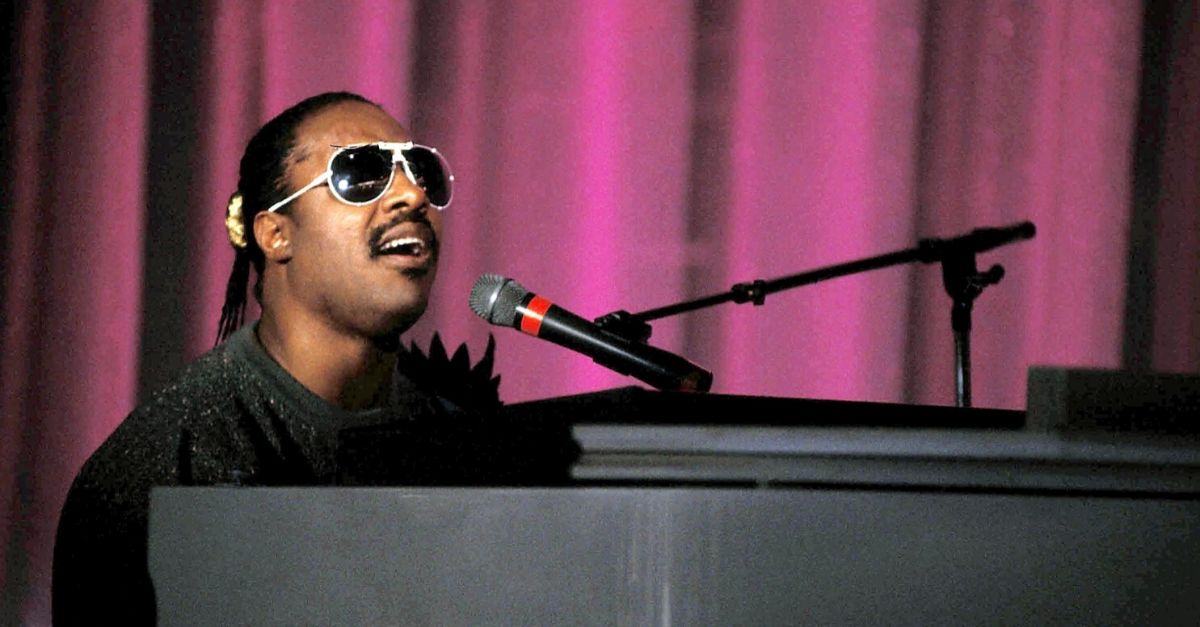 Today, we celebrate Stevie Wonder’s 70th birthday! With music that defined multiple decades back in the 20th century, it’s fascinating to realize how young Stevie Wonder actually is. To put things in perspective, turning 70-years-old in the year 2020 reveals how young Stevie was when he released some of the greatest hits of all time.

Stevie Wonder is known for making timeless music that was not only loved for its talented production but its relevance to society’s state during the time period of each of his releases. Stevland Hardaway Morris (Little Stevie Wonder) was born on May 13, 1950, in Saginaw, Michigan, to songwriter Lula Mae Hardaway and Calvin Judkins. The third of six children, Little Stevie Wonder became blind after birth because being born six weeks prematurely caused him to have retinopathy of prematurity, a condition where eye growth is stunted because the retinas detached.

But becoming blind after birth didn’t stop Little Stevie. He became a child prodigy, signing to Motown’s label at only 11-years-old. At just 13-years-old, Stevie already took the number one spot on Billboard’s Hot 100 in 1963 for his single, “Fingertips.” Under Motown’s label, he released two albums in 1962, Tribute to Uncle Ray covering mainly Ray Charles’ songs and The Jazz Soul of Stevie showcasing his own original talents in composing.

During the 70s, Stevie became huge. He was known for creatively controlling his production, defining his sound with a funky keyboard style. In 1972, he released “Music of My Mind,” “Talking Book,” and another number one hit “Superstition.” He released “Innervisions” in 1973 and “Fulfillingness’ First Finale” in 1974, leading up to his Grammy Award-winning album Songs in the Key of Life in 1976 which won “Album of the Year.”

Happy 70th Birthday to one of my brothers 👉🏽 #StevieWonder pic.twitter.com/Fp0UffOv4r

Songs in the Key of Life has two pop and R&B tracks that became number one hits. “I Wish” and “Sir Duke” slammed the charts, and his most popular “Isn’t She Lovely” was actually written about Aisha, his newly born daughter at the time.

By the 1980s, Stevie had been doing the most in his career. As his album sales increased, he was more involved with charities, had high-profile collaborations, established political impact through his platform and fame, and had multiple television appearances. In 1979, he had released Stevie Wonder’s Journey Through “The Secret Life of Plants” which is notably one of the most popular early albums to be recorded digitally. In 1980, he nailed his first platinum-selling album Hotter than July, which featured the single “Happy Birthday” which essentially established Martin Luther King Jr. Day by commemorating Dr. King Jr.’s birthday.

Stevie released Stevie Wonder’s Original Musiquarium in 1982, which included “Front Line,” a song that told the story of a Vietnam War soldier. He also had another number one hit with Paul McCartney, emphasizing racial harmony and collaboration in “Ebony and Ivory.” In 1984, the lead single of his soundtrack album for the movie The Woman in Red, “I Just Called to Say I Love You,” also became a number one pop and R&B hit not only in the United States but also in England.

The song won an Academy Award in 1985 for “Best Song” and Stevie even accepted an Oscar award for “Best Original Song” for his song “It’s Wrong” in the name of Nelson Mandela. Although getting banned from all South African radios by South Africa’s government, he was honored by the UN’s Special Committee Against Apartheid for his movements against racism.

Stevie took part in many duets with the biggest names in music. He and Bruce Springsteen did a duet on charity single, “We Are the World,” performed for the African Famine Relief, and Stevie was part of another charity AIDS-inspired single in 1986, “That’s What Friends Are For.” He also appeared on Bad by Michael Jackson, duetting “Just Good Friends.” The pair also sang the duet “Get It” on Stevie’s album Characters, released in 1987.

By the end of the 1990s, Stevie had released so many more classic hits and features, appeared on more movie soundtracks, and even sang at the 1996 Summer Olympics closing ceremony. In 1997, he collaborated with Babyface on “How Come, How Long” which was nominated for a Grammy Award because its topic covered domestic violence. In 1999, he showcased more of his talents playing the harmonica on “Brand New Day” by Sting. By December 1999, Stevie announced that he was interested in making moves to partially restore his sight.

As the 21st century hit, Stevie showed no signs of slowing down on the impact he was making on the world with his music. By the mid-2000s, Stevie appeared on albums for Busta Rhymes’, Dr. Dre, Sha Money XL, and Snoop Dogg. “Conversations,” the last track of Snoop Dogg’s album, Tha Blue Carpet Treatment, is actually a remake of Stevie’s song “Have a Talk with God” from Songs in the Key of Life.????

He sang at the funerals and memorials of Michael Jackson, Etta James, Aretha Franklin, and Whitney Houston. Rumors of him releasing two more albums surfaced in 2013, but never saw the public eye. All in all, this legend won the most Grammy Awards ever, capping out at 25, and had 30 U.S. top ten hits.

He won the Lifetime Achievement Award and Polar Music Prize. Stevie was also inducted into the Rock and Roll Hall of Fame in 1989 and the Songwriters Hall of Fame in 2002. The Rolling Stone has named him the ninth greatest singer of all time and he was the fourth artist to receive the Montreal Jazz Festival Spirit Award. Along with Frank Sinatra, Stevie is one of two artists and groups who have won the “Album of the Year” Grammy Award three times as a main artist. However, Stevie is the only artist who has done this consecutively.

After three marriages and nine children, it’s safe to say Stevie Wonder has absolutely made the most out of life. Not only was he known to help connect and unify society through his music, but he also used his voice, platform, and status to help make a better world during times of great change.

Happy 70th birthday Stevie Wonder! Thank you for the endless amounts of good, timeless music that will continue to resonate with the generations to come.

Watch: The King of Rock N? Roll Found Inspiration From This Book of the Bible