The Satanic Temple is Suing Netflix and Warner Bros. for $150 Million 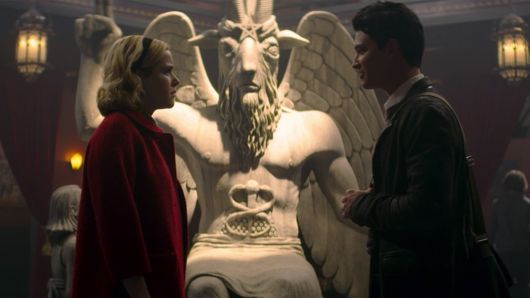 The Satanic Temple isn’t too happy about the Netflix and Warner Bros. show, “The Chilling Adventures of Sabrina.” The show, which follows the Archie Comic’s character, Sabrina Spellman, is a modern-day haunting twist compared to the 1990’s sitcom starring Melissa Joan Hart. It’s still got all your favorites characters like Salem the cat and Aunt Hilda, however, one thing is totally different–– Sabrina’s family is part of the Church of the Night, a witch coven who worships the Dark Lord.

Sounds quite Satanistic don’t you think? The Satanic Temple thinks so too and is suing Netflix and Warner Bros. Company for $150 million on charges of copyright infringements, trademark violations and causing injury to its business reputation. (Yea, I don’t think this show is the main thing causing a bad reputation…). The court documents were filed on Thursday in a New York district court.

Find yourself a mortal who doesn’t know you’re a witch about to sign your soul away to the devil, so when you ask them “hypothetical” questions about gaining magical powers in exchange for love they say heart melty things like this.

The Temple is claiming that the show used Baphomet, “an androgynous goat-headed deity” by court documents, without prior consent from the group. In the episode, the statue of the satanic god can be seen surrounded by children. The lawsuit shares that the statue in the show is on-point with the Temple’s own Baphomet monument which gained fame after being posted on Indiegogo in 2014. Originally the statue was to be installed next to the Ten Commandments at the Oklahoma State Capitol but after many complaints, the statue was relocated to Detroit.

According to The Satanic Temple co-founder Lucien Greaves, the statue is “a central icon that has come to represent us [satanists] as a people”. Furthermore, Lucien laments that the show is overpowering them on Google searches (heaven forbid) and people are referring to the statue as a prop from the show rather than the real thing.

The group is also afraid that the show’s depiction of followers of the Dark Lord is going to tarnish their own reputation. Characters in the show that worship Satan engage in cannibalism, murder, torture, and necromancy. The Satanic Temple, however, “does not promote evil and instead holds to the basic principle that undue suffering is bad, and that which reduces suffering is good,” and hails Satan as “rebel against God’s authority, rather than an evil being.”

The Temple reached out to Netflix to remove the statue and when the company did not respond the group went on to file the lawsuit. It’s a total satanic panic.