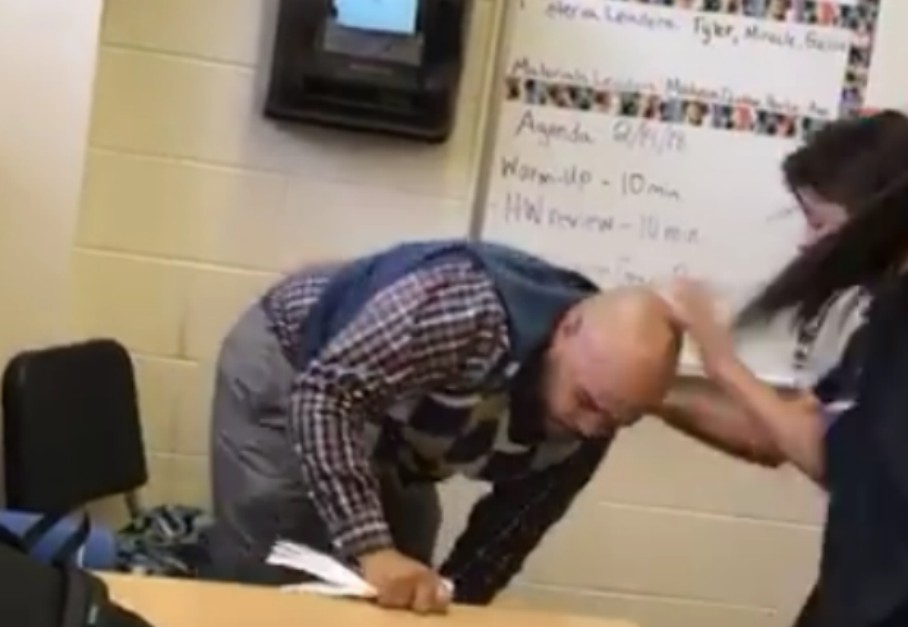 After a video was posted to Facebook showing a substitute teacher body slamming a student, the North Carolina teacher was fired.

According to a WGN report, the mother of the middle school student at Western Guilford Middle School posted video of the incident via Facebook on Frida.

She posted that the altercation happened on Valentine’s Day and that she wants “justice.”

Jose Escudero, her son, said the incident started over a box of chocolates. The substitute teacher allegedly took them away and threw them in the sink.

Jose said he then waited towards the end of class to get them back and that was when the incident happened.

Jose, who is 12-years-old, says he put the chocolates in his book bag and that’s when the substitute teacher tried grabbing it from him. Jose then said the teacher grabbed him by his shirt, pinned him up against the wall and then threw him over his shoulder to the ground.

Jose had bruises on his elbow, shoulder as well as back.

Nora Carr, Chief of Staff said, “This kind of behavior toward a student is disturbing and unacceptable. We reported the behavior to law enforcement and will no longer employ this person as a substitute teacher or in any other GCS position.”

Jose and his mom say they plan to take legal action towards both the school and substitute teacher.

To watch the altercation shared by Mayo Corrales, scroll on below.