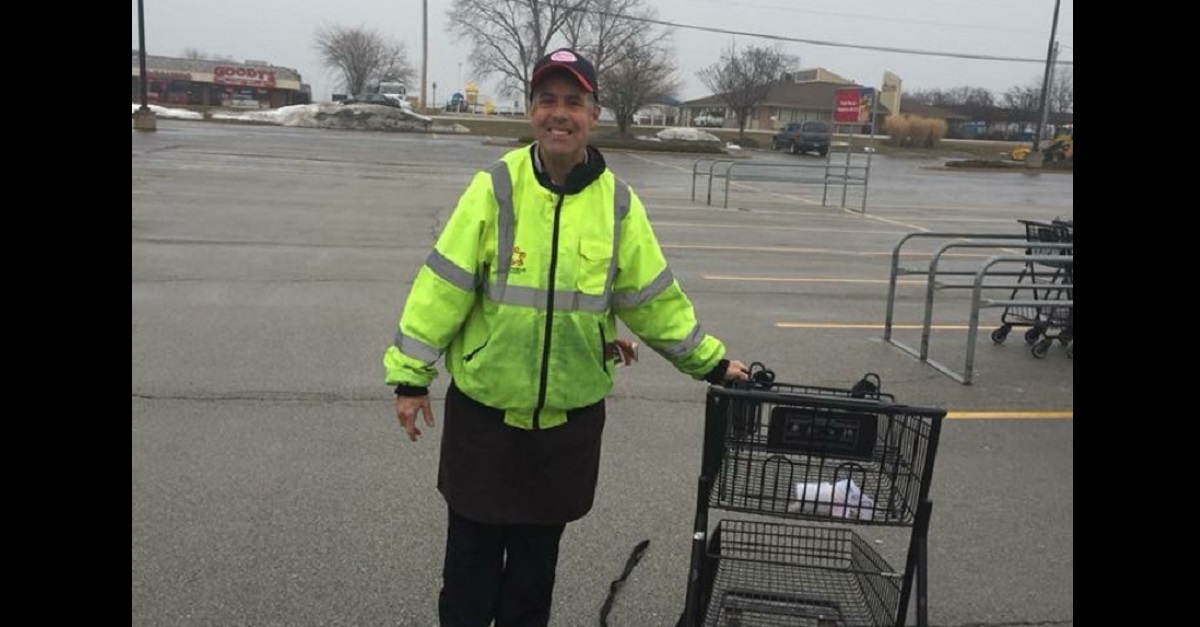 55-year-old John LaRoy works at the Jewel-Osco in Homer Glen. John Flemming is a regular customer at the grocery store and took note of LaRoy’s dedication and enthusiasm for his work.

“John does great work. He’s so friendly and so helpful,” Flemming told the Tribune. “He drops whatever he’s doing to help you.”

Flemming decided that LaRoy needed greater recognition for his accomplishments. After requesting permission, Flemming snapped a photo of LaRoy to post on the Facebook Homer Glen Village Square Community Page. He used the headline: “Hardest working man in Homer Glen.”

The seemingly simple act yielded over 1500 “likes” and tons more positive comments from other satisfied customers.

But that’s not all. Tara Williams saw the page and decided to take things a step further.

“I just decided to pull the trigger and set up a GoFundMe page,” she said. Over $7,000 has been raised in two weeks as of this writing. As she wrote on the page:

“John is a man who has touched our community with his friendly and positive demeanor and dedication to helping make our lives easier while we shop.  And now is our chance to say thank you to this wonderful, kind hearted man that we all feel so blessed to know.  Many people in our community expressed interest in doing something special for John LaRoy.  His family said he loves going on vacation, so let’s give him one from all of us!  Maybe he will even get to see a Sox game on the road!  Wherever he chooses to go, he will know just how much his community appreciates him.”

Williams first met LaRoy when she had just moved to the area and was pregnant. “I’m walking out with my cart full of food and crossing the (parking area) where the stop sign was and all of a sudden I hear, ‘Ma’am, ma’am,’ and I see this man running from the other side of the parking lot toward me,” Williams said.

“He said, ‘I will help you take that to your car.’ And he did. He said, ‘You get in the front seat and just relax; I’ll unload your cart and take it away.’ I was like ‘Holy Cow, I’m not used to this kind of service.'”

Mark LaRoy, John’s brother, talked a little bit about John’s history. He used to work at an Omni grocery store that were owned by Dominick’s. He was named an employee of the year for all of the Omni and Dominick’s stores in 1991.

“I am awestruck by this outpouring. I always believed he was a valuable employee but this is just amazing the way the community has come together,” Mark said.

RELATED: This off-duty DPS officer became Superman to Houston newlyweds who had too much fun in Austin

In addition to working at the Jewel, John LaRoy also takes care of his 88-year-old father.

John couldn’t be happier at work. “I go outside, get all the carts off the lots, get the papers out of the carts and do whatever they want me to do,” he said. “I like to talk to people. I like to offer carry out service. If they don’t need it, I just go on my way.”