A couple in a northwest Houston neighborhood were reviewing their security camera footage when they came across a wily surprise. 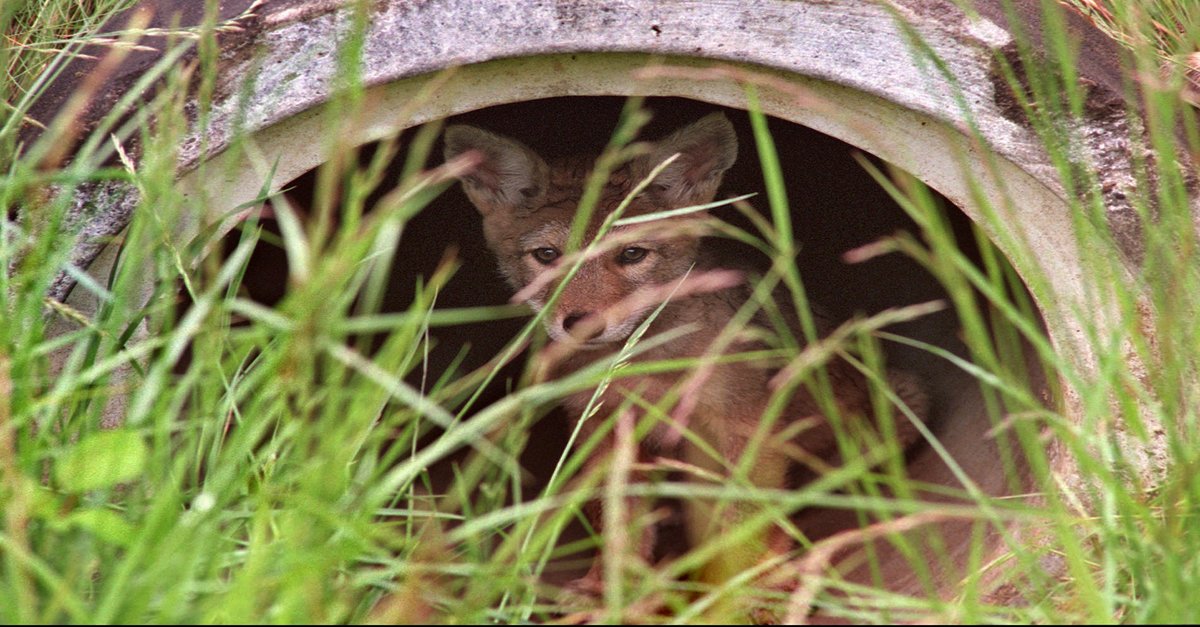 AP Photo, The Daily News, Roger Werth
One of four coyote pups peers out of his home, a culvert that is 60 feet from the main runway at the Kelso-Longview Regional Airport on Wednesday May 20, 1998. Robert Olson Sr., airport manager, said they could be "something of a hazard" close to the runway, but so far there are no plans to relocate the pups and their parents. Coyotes are wild dogs that look like a small wolf and live from the Pacific Northwest to the Atlantic Coast. (AP Photo, The Daily News, Roger Werth)

A couple in a northwest Houston neighborhood were reviewing their security camera footage when they came across a wily surprise.

Common in Texas nearly year-round thanks to the state’s warm climate, the couple saw a pair of coyotes roaming through their front yard.

John Stout and Greer Goodlow examined the surveillance footage from their Oak Forest home when they noticed the two animals taking a stroll.

The two took note of reports regarding coyote sightings on their neighborhood’s Facebook page, but were not expecting the animals to visit their own yard:

?I still can?t believe there?s two of them,? said Goodlow, as she watched the footage.

?We?re going to probably take more precautions,? Stout said. ?Watch the dogs closer, make sure the cats don?t get out of the house, especially at night.?

Coyote sightings are not rare in Houston, especially along the city’s bayous. Residents report spotting of the animals in neighborhoods ranging from the posh mansions of River Oaks, to the historic homes of the Old Sixth Ward and as far out as The Woodlands and Clear Lake.

Diana Foss, a biologist with the Texas Parks and Wildlife Department, said coyotes can be seen almost ?everywhere? across the state.

She also offers some advice to those who would seek to harm the animals:

“It’s better to work with what you’ve got,” she said in an interview. “If you shoot them, you create a hole in the population and encourage other coyotes to fill it.”

Foss also said mated pairs are ?the ideal situation? when it comes to roaming coyotes because single animals are often more unpredictable, and potentially dangerous, than a couple seeking to care for its litter.

RELATED: Dallas gets “uglier” — could Houston be next?

For those seeking to keep coyotes from their property, Foss recommends you make a lot of noise, make yourself look large and squirt them with water or pepper spray to scare them off.