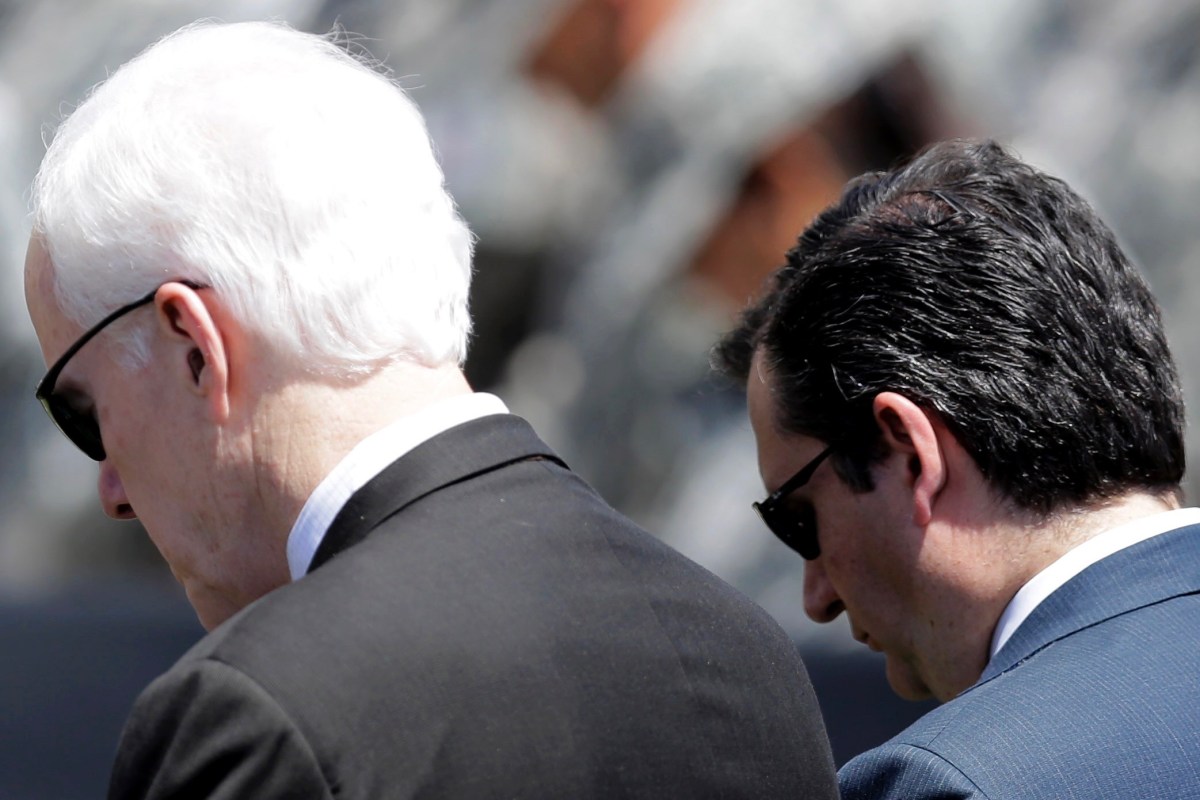 AP Photo/Eric Gay
Senate Minority Whip John Cornyn of Texas, left, and Sen. Ted Cruz, R-Texas, attend a memorial ceremony for shooting victims, Wednesday, April 9, 2014, at Fort Hood, Texas, where President Barack Obama spoke. The shooting rampage left four dead and more than a dozen injured. President Barack Obama is reprising his role as chief comforter as he returns once again to a grief-stricken corner of America to mourn with the families of those killed last week at Fort Hood and offer solace to the nation.(AP Photo/Eric Gay)

This story has been updated to include vote count information and a statement by Senator Cornyn.

The full implications, including leverage issues with Russia, an ally of Syria’s President Bashar al-Assad, are still taking shape today, but Texas’ leaders were quick to weigh in on the situation.

The Junior Senator from Texas, Ted Cruz issued a statement on his website:

Today, after eight years of Obama foreign policy failures, Syria is a humanitarian disaster. Bashar al-Assad is a monster, a puppet of Russia and Iran, and he has once again used chemical weapons against his own citizens, murdering innocent men, women, and children.

Our prayers are with Assad’s victims, and with the victims of the ISIS and al Qaeda terrorists ripping Syria apart. And, as always, our support and prayers are with the brave Americans in uniform who carried out the military strike tonight.

Any military action in Syria must be justified as protecting the vital national security interests of America – including decisive action to prevent chemical weapons from falling into the hands of radical Islamic terrorists – and I look forward to our Commander-in-Chief making the case to Congress and the American people how we should do so in the days ahead.

However, as of 10:15 a.m., the no. 2 Republican, Senate Whip, and Senior Member from Texas John Cornyn had not issued a statement, aside from a few re-Tweets last night and a brief post earlier this morning:

Lawfare: China and Russia have blocked Security Council resolutions to authorize the use of force to respond to Assad regime’s atrocities.

He also posted about an Indian girl found in the forest living with monkeys this morning:

A girl was found living among monkeys in an Indian forest. How she got there is a mystery. https://t.co/jMjBQg013v

As a respected Republican leader of the Senate Judiciary Committee, Cornyn may not have had time to issue a statement on Syria due to the impending Gorsuch SCOTUS nomination. The Senate changed its deliberative rules this week to get the appointee confirmed and Gorsuch’s confirmation is expected to be finalized by Friday.

"Judge Gorsuch will be confirmed as the next Supreme Court justice." – Sen. @JohnCornyn #ConfirmGorsuch #SCOTUS pic.twitter.com/M323jBBWDj

Of course, Cruz is also on the Judiciary Committee, and he’s made time for both.

A decade ago, the Senate confirmed Judge Gorsuch by a voice vote without recorded dissent. Not a single senator objected. #ConfirmGorsuch pic.twitter.com/aTNn8AfgAF

Then again, he could be working hard to defend his seat, as his opponent for the 2018 election had quite a showing of support at a rally this week.

Exciting times in the U.S. Senate.

UPDATE: The Senate confirmed Gorsuch Friday morning by a vote of 54-45.

And Senator Cornyn posted the two following releases on his website:

“WASHINGTON – Today U.S. Senator John Cornyn (R-TX) appeared on Fox & Friends to discuss last night’s missile strikes in Syria and the confirmation of Judge Neil Gorsuch to the U.S. Supreme Court. Excerpts from his appearance are below, and video of his remarks can be found here.

“Weakness is a provocation, and strength is a deterrence. And until now, all we’ve seen in Syria is weakness, and of course we’ve seen Putin, and Iran, and President Assad fill that space. In the meantime, as Senator McCain’s pointed out, 400,000 civilians dead, and Assad continues to use chemical weapons, which are internationally banned under law.”

“It was a welcome demonstration of America’s commitment, but what comes next is harder.”

“It represents the first concrete demonstration of what this President’s foreign policy will be. For the last eight years, we’ve seen President Obama drawing us back, withdrawing from the international stage. But my experience is that the international community craves and really wants American leadership. But when America recedes off the international stage, it really does empower people like Putin, Assad, and the theocrats in Iran, and the world’s a more dangerous place as a result.”

On the Expected Confirmation of Judge Neil Gorsuch Later Today:

“Well I’m very happy because this judge is not only a very fine man but a very outstanding judge, and really the arguments against him really didn’t have much to do with him.”

“The Senate has returned now to the status quo before the filibuster, where no partisan filibuster of a Supreme Court justice has ever been successful. So, I think it’s a good day for the Senate and great day for the country.”

“WASHINGTON – Today on the Senate floor, U.S. Senator John Cornyn (R-TX) reacted to last night’s airstrikes in Syria. Excerpts of Sen. Cornyn’s remarks are below, and video of his remarks can be found here.

“I’d like to start briefly by mentioning the horrific chemical attack on innocent civilians in Syria earlier this week. It was nothing short of evil, and I stand shoulder to shoulder with the Administration in condemning this brutality. Again we see Bashar al-Assad crossing a line, a line drawn and then ignored by the Obama Administration. The United States and the world community simply can’t stand idly while Syria continues crimes against humanity.”

“That’s why last night the Administration responded quickly and proportionately, and I commend the President and his national security team for acting decisively and sending a clear message to Assad and our allies.”

“I stand ready to work with the President and his Administration on a unified strategy to defeat Assad’s barbarism and to work toward greater stability in Syria and throughout the region.”