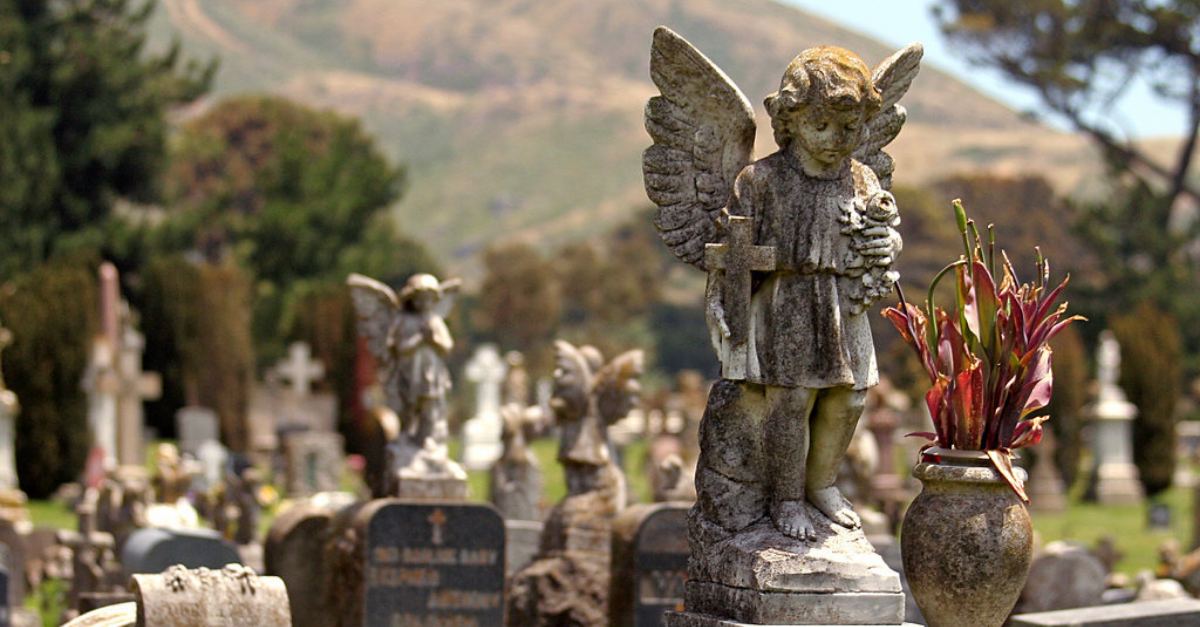 From time to time, I have to chuckle about the stuff I write that I know would weird my mom the f* out. If she were dead, she’d be rolling in her grave over this one. While she isn’t dead, most of the people in Colma, California are. In fact, they outnumber the living.

On the San Francisco Peninsula, in the Bay Area of California rests the 1.9 square mile town of Colma. It’s known for its mass graves and the witty slogan, “It’s great to be alive in Colma”. In 2010, the city had 1,792 alive people. The city was, however, founded as a “necropolis” – a city for dead people – in the early 1920s.

Where is Colma, California?

This San Mateo county of Southern San Francisco is essentially a run-over for cemeteries. Neighboring cities, mainly San Francisco, realized decades ago that they did not have enough space to accommodate graves for those who had passed and the living population. So they got rid of the part of the population that lived below ground.

Before it became a “City of the Silent” with a population of 1.5 million below ground, it was a small community of homes and business along the El Camino Real known as “Town of Lawndale”. Since there was already a city by that name in Los Angeles County, the name was changed to Colma. Colma flourished, complete with churches, and regular activities for its residents. In 1900, The city of San Francisco outlawed new cemeteries to be built within the city limits.

Twelve years later, the casual task of relocating dead bodies from the San Francisco cemeteries to Colma began. To help balance some of the costs, those survived by the dead paid for $10 per grave and marker if they wanted their loved ones to have a proper gravesite. The others’ final resting places were mass graves. The process wasn’t completed until the 1940s and when it was done, about 150,000 bodies of San Franciscans and others were moved.

Aware of their city’s reputation, the Colma residents live normal American lives and yes, still buy real estate. Often they forget the fact that the dead outnumber the living. There is a private Catholic school, for grades kindergarten – 8th grade, and about two public schools, for each respective grade. The community remains peaceful and the largest city in the San Mateo County, while Daly City is minutes away from the San Francisco Bay for anyone seeking adventure.

While most residents in the city work jobs unrelated to funerals, cemetery tourism is popular. Many like to visit the influential figures buried in the city. Most popular are the Cypress Lawn Heritage Foundation, the Colma relocation of San Francisco Laurel Hill Cemetery. This cemetery is deemed historically important by the city and journalist William Randolph Hearst is buried here. Joe DiMaggio, baseball legend rests at the Holy Cross cemetery, Levi Strauss is buried at the Home of Peace Cemetery and Wyatt Earp is at the Hills of Eternity Memorial Park.

Watch: People Are Losing It Over Peanut Butter and Mayo Sandwiches