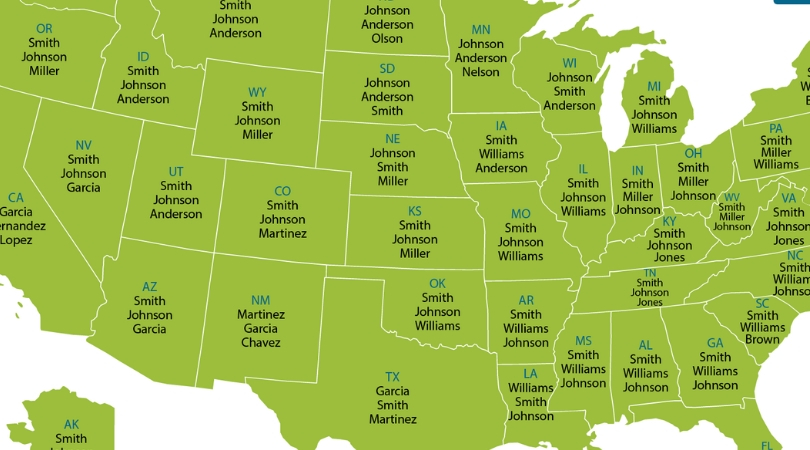 The United States of America, “Land of the Free,” and apparently the land of the Smiths as well. Ancestry.com released data from their genealogists showing the most common surnames based on historical records in every state, and it turned out Smith pretty much takes the gold medal with it being the most popular last name in 45 states!

Which states didn’t make the cut? None other than California, Hawaii, New Mexico, Montana, and North Dakota. Some of the most common surnames have origins from Mexico or Spain, like Lopez, Martinez, and Garcia, common in California, Arizona, Texas, and surprisingly Colorado. This is so intriguing to see how some of my friends’ last names came about as well and where they seemingly originated from.

Other popular surnames include Williams (Somehow, I feel like Will Smith is the one who created this list), Jones, Johnson, Anderson, and Miller. People in the Northwest are more likely to encounter common names Anderson than a Brown though, which is pretty common on the East Coast. What shocked me the most out of all the states was Hawaii, whose three most common surnames – Lee, Wong, and Kim- don’t appear anywhere in the top three for any country. As well as in Massachusetts, where there is a large Irish population and is the only state that has Sullivan in its top 3.

Still, it seems pretty impressive that so many states have the same last family names. With Williams, Johnson, Anderson, and Miller dominating the charts, it’s crazy to think, “could we all be related?” Totally joking, I know that’s not how things work, but this definitely shows how family history, immigration, and geography play a role in shaping the most common last names across the United States. So, is your family tree name on the map?

Editor’s note: This article was originally published on October 4, 2018.