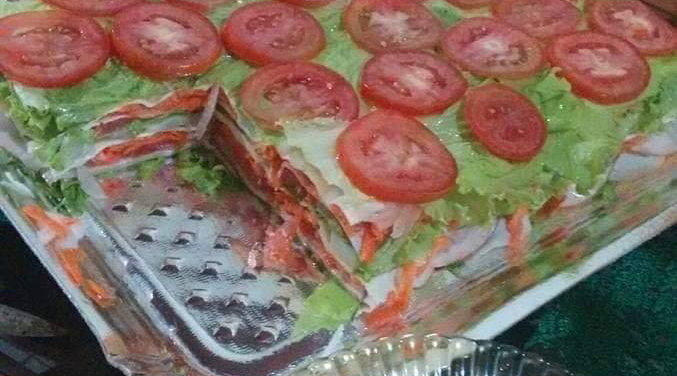 There are countless food abominations out there. Ketchup on steak, any sugar-free candy your dentist gives you as a kid, and gas station seafood are all an affront to the proud culinary history of the human race. You can go ahead and add salad lasagna to list as well. Is this pro-keto?

The dish was, at least, prepared with good intentions (the exact kind the road to hell is paved with, presumably). When asked what possessed him (besides the devil) to create the dish, Dick Chmeller, a watercraft engineer from Cardiff (naturally this came from England), told TODAY Food that he made the dish up on the spot after learning, while preparing dinner, that his wife’s, Melanie Chmeller-Smith, dinner guest, Omar Pasha, had a strict vegan diet . Thinking on his feet, he abandoned whatever socially acceptable food he was making and created this abomination. He should’ve just stuck to carbs instead of whipping up some lasagna salad. A low-carb-lasagna is still gross sounding.

Thanks I hate salad lasagna. from TIHI

As dramatic as the first two paragraphs were, I’m not actually sure why this salad lasagna bugs me so much. It’s literally just a salad but shaped weird. The guy didn’t bake it (which would be legitimately foul). But for some reason, this looks wrong. I’d be fine with a salad taco — as in a folded piece of lettuce with the contents of the salad laid within. Obviously, a veggie lettuce wrap is totally acceptable too. But there’s something unsettling about salad in lasagna form, with slivers of red tomatoes lined up in an appealing geometric fashion the way that they are on this veggie dish, topped with mayonnaise.

It’s probably because the idea of a salad and lasagna are total food opposites. Salad is light and fresh and cool. Lasagna is heavy and hot. Salad works as a taco, a sandwich, or a wrap with iceberg lettuce because those foods are capable of being light and fresh on their own. Lasagna isn’t any of those things. Ever. You could make a healthy lasagna, maybe. But it’d still be hot and kind of heavy. A salad calzone would be equally appalling.

Some people think this is a joke. Redstate thought 4chan was “punking the Today show,” thinking that this was just some keto joke. They claimed this was a hoax considering all the factors of this story apparently seem to outrageous. Maybe it is a prank.

This may all be based on semantics but I don’t care. Presentation is part of the dish. Keep this away from me. This is the first time and last time I want to hear about something like this.

Editor’s note: This article was originally published on April 30, 2019.

Watch: 8 Desserts Are Better Than Only 1, But How About 1 Pan With 8 Desserts?