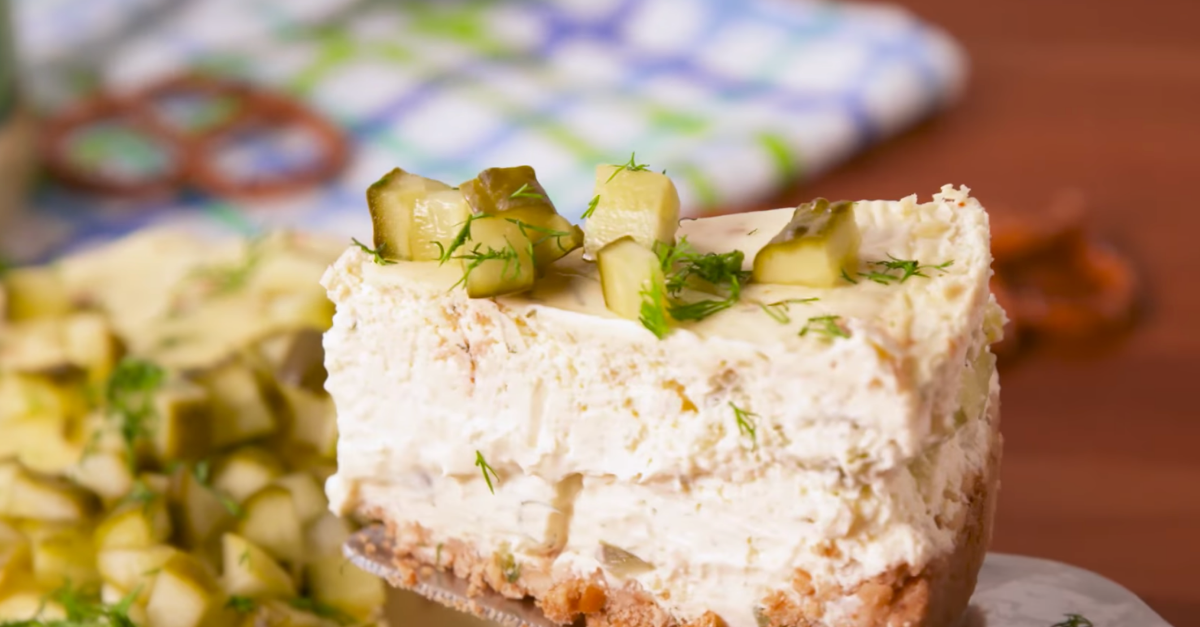 Everyone needs to cool it with the pickles. Alright? This cannot be the next hot “crazy” food item that gets put on everything from dessert to breakfast to tacos. Pickles are not the new bacon. Pickles are only good in a select few instances. Use them for something other than what God intended and your culinary hubris will be punished with the flavor of ass. (Boozey pickles being one of the few exceptions.)

People have been pushing crap like pickle pizza and pickle shots — which look and are awful, respectively, based on my own personal experience — but pickle cheesecake is just egregious. The recipe comes from Delish. The video starts with the caption, “We did a bad, bad thing” and I agree. You are monsters.

Granted, this “cheesecake” isn’t one in the classic sense. It’s really more like a pickle-y dip made to look like a cheesecake. But also, I don’t want a pickle-y dip. A sauce with some dill in it, like tzatziki sauce? Sure. But not actual pickle flavored cheese dip. Pickles and cheese do not work in tandem beyond on a sandwich or burger together, as a part of a wider cornucopia of flavor. There is a narrow avenue within which pickles work. Stop trying to expand that, dammit.

Let’s go back to overusing actual awesome food, like mac and cheese or bacon. You want a great candidate? Pepperoni. I could eat pepperoni on anything that isn’t dessert. (Stop trying to f*ck up ice cream with spices and meats.) Lasagna with pepperoni in it? Goddamn right. Mozzarella sticks kicked up a notch with pepperoni in them? I will eat a thousand. Pepperoni mac and cheese? Already exists and looks insane. Cut a chicken breast open, shove a whole bunch of pepperoni inside it, bread it, and deep fry it. That is some state fair level obesity and I will gladly inhale it.

Get outta here with your stupid pickles.

This story was originally published October 24, 2018.

Watch: Would You Eat These Booze-Soaked Pickles?