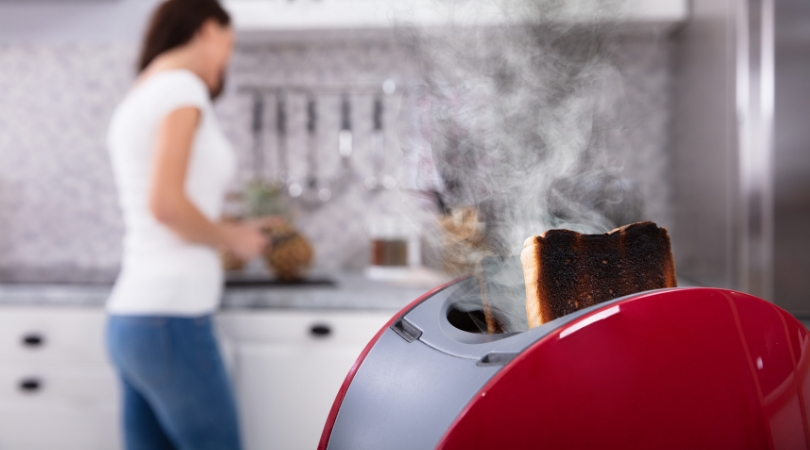 Has your nose been extra stuffed this week? Have you been getting sick more often than usual? It’s your toaster! Yes, a new study from the University of Texas at Austin warns that toasters, candles, and other household smoke makers expose people to more air pollution than standing next to a busy intersection.

According to the study, the most dangerous item that exposes us to pollution is toasters, since they “immediately send toxic particles” into the air once they’re turned on. Yes, that is seriously what the study says. Apparently, burnt toast is particularly harmful. So, if you can’t quit eating that yummy burnt bread, researchers suggests only heating it to a light crisp. Which is barbaric, whatever science.

Here's something to think about before you pop that bread in the toaster… it could be bad for your health. It all has to do with pollution. A new study warns, toasters are exposing people to more air pollution, then if they were standing at a busy intersection! pic.twitter.com/IT5fREZJYb

Researches used advanced sensors and cameras to monitor the indoor air quality of a 1,200 square foot manufactured home on the University of Texas Campus in Austin, Texas. Over the course of a month, the researchers conducted a variety of daily household activities such as cook a full Thanksgiving Dinner and clean items around the home.

But that’s not it! So what else hurts us and releases a greater source of global atmospheric air pollution? Apparently house cleaners, air purifiers, and pretty much any other type of spray. Oh, and also cooking roast dinners and boiling meat, vegetables and potatoes which push particle in the air up to 13 times the level recorded on the street.

Some regular household items seem harmless, but that’s not always the case. UT research shows that you are exposed to more air pollution when using a toaster than when at a busy intersection 🛣https://t.co/yf1kKJiR2E

But, according to these experts, who apparently want to take bread away from our food group, even a basic task such as boiling water over a stove top flame could contribute to high levels of gaseous air pollutants and suspense particulates. Which ultimately can damage our health. So…we can?t eat or drink anything. Cool, cool, cool.

While the study does note that the effects are short-lived, scientists are more concerned by the health impact scraps of branded food, droplets of hot oil and chemical from gas stoves that are lingering in your kitchen. These cooking items emit tiny particles in the atmosphere, that have been linked to several issues ranging from heart and lung disease to mental health problems.

Now, maybe this is true, maybe it isn’t, but I feel like this is too much. Just let us eat bread in peace, man! What am I going to have for breakfast now? What will I use to clean my apartment with if I have no cleaning products?

Nope, don’t agree with this study. Pass the toast.