The Striped Newborn Blankets Everyone Had Are an American-Made Treasure 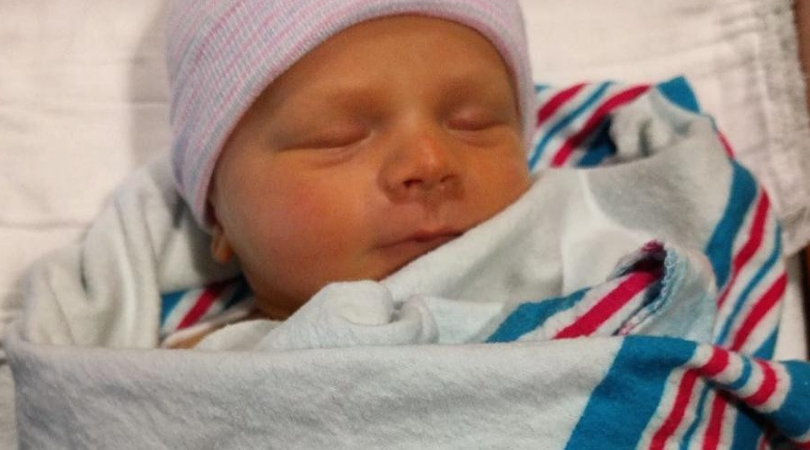 The Kuddle Up cotton flannel receiving blanket is probably the only recognizable baby blanket on the market. You’ve probably seen one. You may have even been sent home in one. The company that makes the baby blankets, Medline, was originally an apron maker that transitioned into making surgical gowns. They’ve has been making their famous baby blankets and supplying them to maternity wards since the 1950s. The women who worked in hospitals wanted something to “spice” up the workspace as well as have a visually pleasant, unisex receiving a blanket. The design is still used today.

Medline Industries sells over a million of their all-cotton Kuddle-Up baby blankets. On their website, they describe the blankets as “flannelized” and boast a variety of adorable nursery prints – which they do have. There’s the duck print, elephant print, chick print, baby footprints, and even a colorful dinosaur print. Check them out here, they’re very cute, indeed!

Gettin our #swaddle on. He didn't care for #swaddling when he was a #newborn but he's more receptive now as a #fouryearold! Just waiting for #adenandanais to come out with their jumbo size.

The most popular receiving blanket is the white with candy stripe Kuddle Up blanket. It features those classic thick blue stripes and thin pinkish-red stripes between. I remember finding a few of these Kuddle-Up flannel baby blankets in my mom’s linen closet, growing up. I also held my youngest sister in one the day she was born, so I get the attachment people have for them.

The popularity of the Kuddle Up blanket has more to do with statistics than aesthetics, however. While only half of the births occurring before Medline started making their blankets took place in hospitals, that percentage has greatly increased since. Before 1950 only 50% occurred in hospitals. In 1950 the amount had risen to 88% and currently that percentage is in the high 90’s.

The Kuddle Up blanket was introduced around the time the United States was standardizing childbirth, including the practice cute newborn photo. This means that there are more blankets around now simply because more babies were being born, not because people liked it so much. Many people do have a fondness for the blankets.

Many new parents take their babies home and decorate cribs with the Kuddle Up flannel blankets even though the hospital blankets technically aren’t supposed to leave the vicinity. Today, the blankets are sold all over the world. Just as there are millions of daily newborn baby photos featuring the Kuddle Up candy stripe baby blanket shared on social media!

HOW TO SWADDLE A NEWBORN 👶🏽🌸✨ ———————————————————————— Swaddling is a simple technique used for newborns that resembles the same atmosphere of a baby being in the womb. It’s beneficial for keeping the baby warm (until they learn how to regulate their own body temperature), comforted, calm, and it keeps them from being startled by their own startle reflex (aka the Moro Reflex—an involuntary reaction that babies have when their bodies feel unsupported or when they are startled by loud or sudden noises and movements). This is also great for breastfeeding because it helps keep baby’s arms and hands out of the way while you‘re first getting them to latch on. And, it helps prevent them from scratching themselves (and YOU) up with those razor sharp baby nails (because sometimes keeping those baby mittens on can seem impossible 🤦🏾‍♀️). You’ll find a lot of specialty swaddling blankets online or in stores, which are great, but not always necessary. You can uneasily do this with any blanket or fabric that you have..no need to spend the extra money. Most babies will stop needing to be swaddled around 2-3 months. And there are some babies who may not like being swaddled at all (you’ll know they don’t like it when they actively resist or squirm to break free). Swaddling should also be stopped once your baby learns to roll over on their own due to risk of suffocation. And more importantly, because you don’t want to inhibit their motor development skills, which usually picks up around 2-3 months. **sn: no, Irie was not a ‘newborn’ in this video..I just waited too long to make it 🤷🏾‍♀️ she has currently outgrown her swaddling phase. For her, it was actually very short lived 😂

If you know someone who needs a new swaddling blanket for a newborn or if you are just feeling sentimental check out the Medline website. Amazon also sells the receiving blanket– which makes for attractive crib decor for about $10.