Skydiver Reunited With Prosthetic Leg He Lost During 10,000 Ft. Jump 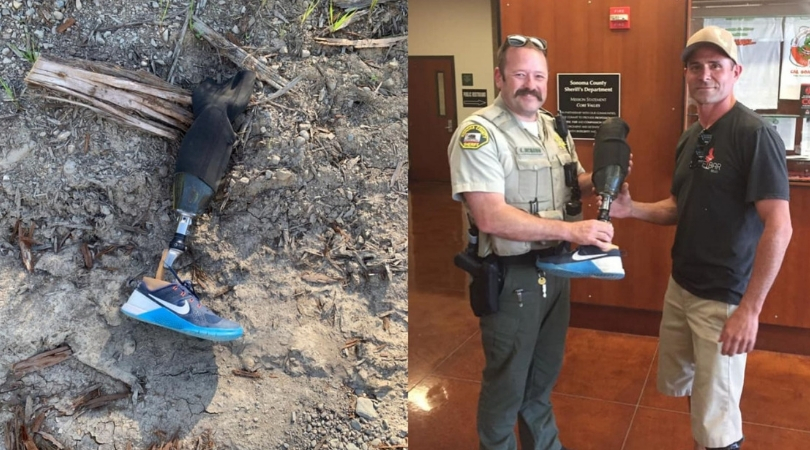 Talk about some luck! A California amputee decided to skydive one sunny morning, only to realize he had lost one of his legs in the process. Yes, the man lost his $15,000 prosthetic limb while in the air, quickly tumbling down to the ground. Dion Callaway, who had his leg amputated after a skydiving accident two years ago, joked that he had now lost two legs the same way.

The 39-year-old said once he landed after a 10,000-foot plunge, he spent hours searching for the prosthetic to no avail. A rush of air had gotten inside the leg, which is how the leg managed to detach. Callaway tried to watch where it was landing but was so overwhelmed at that moment, he ultimately lost track. But, shockingly enough, the limb was eventually recovered at a nearby Cloverdale Lumberyard.

Michael Smith, the lumberyard’s production manager, stated that one of his workers spotted the prosthetic but had first mistaken it for a soda can. Which seems a little bit ridiculous to me, since a soda can is tiny compared to a full on leg. After realizing it was indeed not a soda can, they immediately called out a deputy with the Sonoma County Sheriff’s Office and quickly went out to find the owner. The Sheriff’s Office also posted a “classified” Facebook post hilarious reading, “Missing a leg?”

The deputy eventually contacted the Cloverdale Municipal Airport in hopes of finding the leg’s owner and were able to locate Callaway through the serial number. Callaway was quickly reunited with his prosthetic leg, stating it was in perfect shape! Which is highly impressive since the leg literally flew 10,000 feet down! That is one sturdy ass leg.

Callaway has performed nearly 500 jumps since 2003. He shattered his heel two years ago after he landed on the ground at high-speed. He went through a year of physical therapy before deciding to amputate his leg below the knee but stated that skydiving has helped him cope with his decision and hasn’t stopped flying since. Before investing in his prosthetic leg, the sports enthusiast stated people from Norcal Skydiving would rush to him with his crutches to help him back up after his jump, noting that the new prosthetic has made it easier for him to land.  Since having the amputation, he has skydived more than 20 times and hopes to get back to weekly jumps.

As I said, this is one lucky man. But, can you imagine being that employee who found the leg, though? I?d seriously be freaked out. One, because it?s just a leg with a Nike tennis shoe attached to it, and two, it?s just a leg. Where?s the rest of the body? Yeah, that would have been a whole different story.