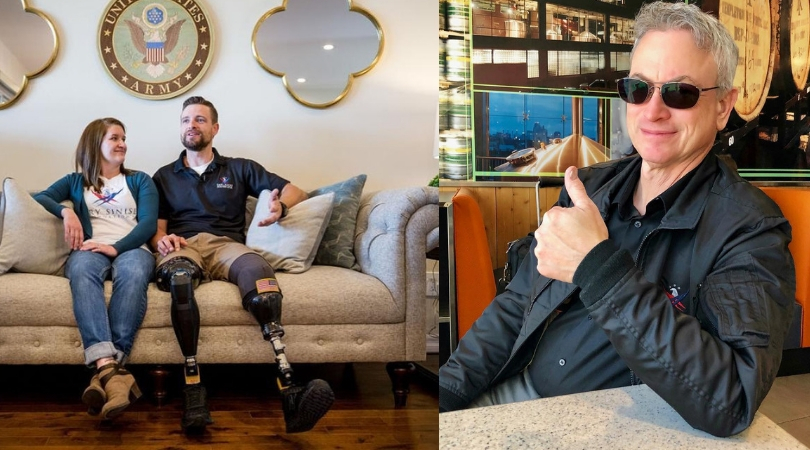 It looks like our favorite American hero, actor Gary Sinise was at it again, this time helping out a Green Beret and his family. Sergeant 1st Class Caleb Brewer is the perfect example of a man getting back on his feet, despite a fall. Brewers enlisted in The U.S. Army Reserves in 2005 and joined the Green Berets in 2012.

During a deployment to Afghanistan in 2015, while his team was conducting a large-scale clearing operation, a pressure-plate improvised explosive device (IED) detonated beneath him, severing his right leg. Brewer eventually lost his left leg as well, suffering from severe blood clots, infections, and a traumatic brain injury. Everyday life was not going to be easy for this wounded hero.

Now at 31, Brewer is back home in Tucson with his family and relies on his prosthetic legs, where he has learned how to walk, run, rock climb, and even surf. Gary Sinise heard about Brewer’s bravery and decided to help the soldier by giving back to him and his family. The Hollywood actor, who has been a supporter of war vets since the ’70s, encouraged the family to apply to the R.I.S.E., Restoring Independence Supporting Empowerment program, whose aim is to build specially adapted smart homes and vehicles for wounded vets.

Another warrior is home. On behalf of everyone at the Gary Sinise Foundation, Welcome Home Brewer family. Army Strong!

Brewer and his family were quickly approved for a new smart home in Tuscon, which was fully outfitted with special modification to assist Brewer in coping with his disability. The new home was completed on February 6, 2019, and features several smartphone-controlled functions. Their house also features a wheelchair-friendly tilted mirror and pocket doors to make it easier for Brewer to travel around the home.

Brewer began to make progress three months after his injury learning how to walk using his prosthetics. Today, he has a specialized work out room to assist in his physical therapy, train to improve his health and makes it a point to helps other disabled men and women rebuild their bodies and their confidence.

It’s no secret that Sinise has been an advocate of strong support networks for veterans and their families. Lt. Dan created the Gary Sinise Foundation after the September 11th attacks, which helps wounded military veterans. Sinise also created the Snowball Express which helps military families who have lost loved ones by providing therapeutic retreats for children and surviving parents.

Honestly, the world would be a much better place if everyone was like Sinise. Three cheers for Lt. Dan!

Editor’s note: This article was originally published on February 4, 2020.