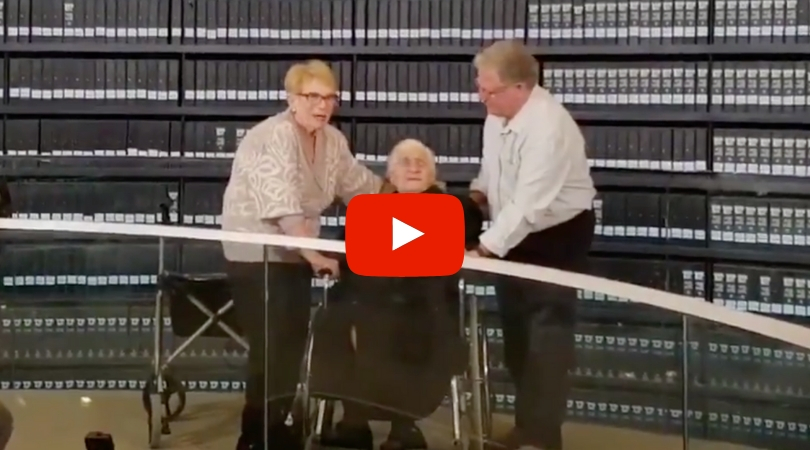 Over 75 years ago, a Greek woman named Melpomeni Dina protected members of a Jewish family during the Holocaust. She gave them food to eat and a place to hide during her teenage years. In particular, Dina helped one family, the Mordechai. They were living in Veria, Greece, during World War II, when almost the entire Jewish community was wiped out by the Nazis. The family received fake identity cards from non-Jewish friends and hid in an unventilated attic in a Turkish Mosque. When they could no longer hide there, Melpomeni Dina and her two older sisters, orphaned, took the entire family into their home.

The seven-member Mordechai family and the Dinas shared a single-room home on the city outskirts and shared food rations. After one of the Mordechai children, Shmuel, fell ill and went to the hospital, the Dinas were in danger of being rescuers. The girls helped the family escape to various locations giving them clothing and food for their trip. The oldest, Yanai, went to the woods, one went to the mountains, the youngest, Yossi Mor and his mother went together in the search of another hiding spot. The Mordechai family miraculously reunited in Israel.

Dina and the Mordechai Siblings

Melpomeni Dina Gianopoulou poses with the children and grandchildren of the Mordechai siblings her family hid from Nazis during World War II in Greece pic.twitter.com/DdCYaYeOZP

Yossi Mor who is now 78, recalls some of the incidents and the kindness shown to him by 93-year old Melpomeni Dina and her two sisters. She stated, “They fed us, they gave us medicine, they gave us the protection, everything, they washed our clothes…She loved me very much.” Back in 2019, the 93-year-old woman met the offspring of the family members she assisted. Every year since 1992, an organization entitled holds the ritual at Israel’s Yad Vashem Holocaust Memorial in which members from both sides can meet each other. They also host reunions where separated relatives can reunite with one another.

The number of both Holocaust survivors and rescuers are dwindling, however, for this annual ritual. The executive vice president of the Jewish Foundation for the Righteous, Stanlee Stahl said “This is probably going to be our last reunion, because of age and frailty”. Hence, this reunion being extra emotional. The organization also provides monthly stipends to those who were rescuers, totaling $1 million dollars.

An emotional meeting between the Mordechai siblings and the woman who saves them during the #Holocaust in Greece.
"Thanks to this wonderful family we have this wonderful and large family." pic.twitter.com/tiixvXf6Un

Those who participated in rescuing have been deemed by Israel, “Righteous Among the Nations”. Their names are engraved along many trees on the avenue at a Jerusalem memorial. The extinct reunion will live on in the hearts of both holocaust survivors and rescuers as they retell their family histories in the years to come.

Editors Note: This article was originally published on November 5, 2019.