ABC News reports that fake detergent is being sold online, at swap meets and at fundraisers nationwide. Authorities recently seized more than 400 buckets of bogus detergents around metro Los Angeles.

How can you know if you’re about to buy fake detergent? You can’t tell by the label because it’s a perfect facsimile of major brands like Tide, Downy and Gain.

RELATED: Store-bought laundry detergent is packed with chemicals, but here’s how to make your own

Moreover, the fake stuff looks and smells like real detergent — even though lab tests have revealed that is has a much higher water content than legitimate detergent.

The real clue is the size! The fake stuff comes in five- or six-gallon buckets, which is not a size of product sold by manufacturer Proctor & Gamble. 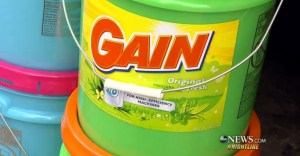 The cost of making this bogus detergent is around $5 a bucket. But dealers routinely sell their wares for up to $25.

In addition to hurting your wallet, there’s still a question about the safety of fake detergent.

RELATED: Imagine never having to do laundry again…

A P&G scientist told ABC News there could be potential health hazards. “Without sounding too scary, the risks are quite large because we just don’t know. It would be like putting your family in a car that you have no idea where it came from,” scientist Jack English said.

So watch out and beware of this hot scam!

To recap, here’s what you need to know about fake detergent: