A soaring superstar whose fame shot him up toward the moon and kept him larger than life itself? Yeah, you’d better believe Elvis Presley had aircraft.

Elvis Presley and Planes: A Match Made in Heaven

He also had a smaller Lockheed Jet Star that the King of Rock and Roll customized himself with yellow and green interior. The interior boasts the original red velvet seats and carpet, as well as the gold-toned hardware chosen by Elvis.

That jet “was primarily used for taking Elvis’ manager and his staff from city to city on his concert tours,” per Graceland.com.

The Lockheed Jet Goes to Auction

About five years ago, the 1962 Lockheed Jetstar went up for auction. It was known as the “lost” jet that the country and rock icon owned with father Vernon.

Although it was privately owned for some time, it wasn’t restored since the King owned it.

LiveAuctioneers.com said the jet “was personally owned by Elvis Presley, and is the ‘Lost’ jet he owned with [Vernon Presley]. The jet has been featured on TV with National Geographic, and has been a huge tourist attraction at the airport in Roswell, NM.”

The auction website further said the winning bidder would get a signed and notarized affidavit from the seller.

“The jet has been privately owned for over 35 years, and is the only airplane once belonging to Elvis that is still owned privately,” LiveAuctioneers.com continued. “The only other two in existence are owned by The Elvis Presley Museum. This jet has the potential of being restored, and placed on exhibit for the world to come see. It could potentially earn its new owner millions of dollars in exhibit, or entry fees as an attraction.”

The website indicated that the plane lacked engines and that the cockpit wasn’t restored.

“The plane would have to be disassembled in order to be shipped, and our auction firm will play an assistive role in facilitating shipping at the winning bidder’s expense,” according to the website.

The starting bid was a mere $10,000. But Elvis Presley’s private Lockheed Jetstar jet eventually sold for $430,000 in May 2017, according to LiveAuctioneers.com.

That’s a far cry from its estimated worth of between $2 million and $3.5 million.

As for the other aircraft, the Lisa Marie and the Hound Dog II were sold in 2015. However, they remained at the superstar’s historic Graceland home in Memphis, Tennessee.

Here’s a glimpse of what Elvis might have looked like flying in a jet, courtesy of Baz Luhrmann’s recent movie. 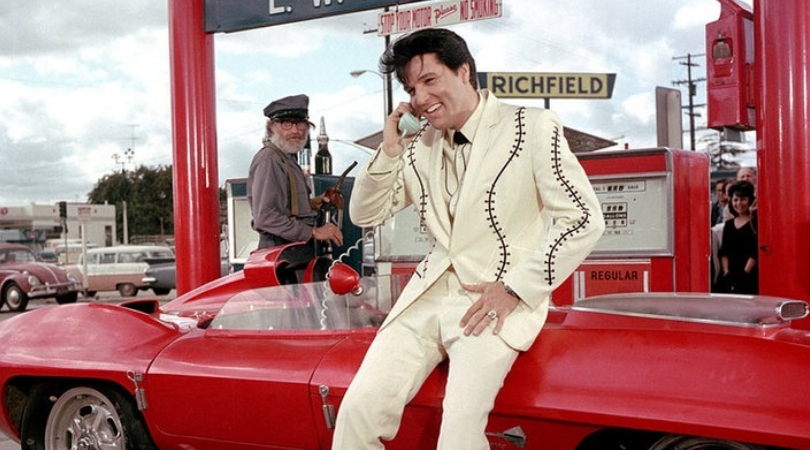