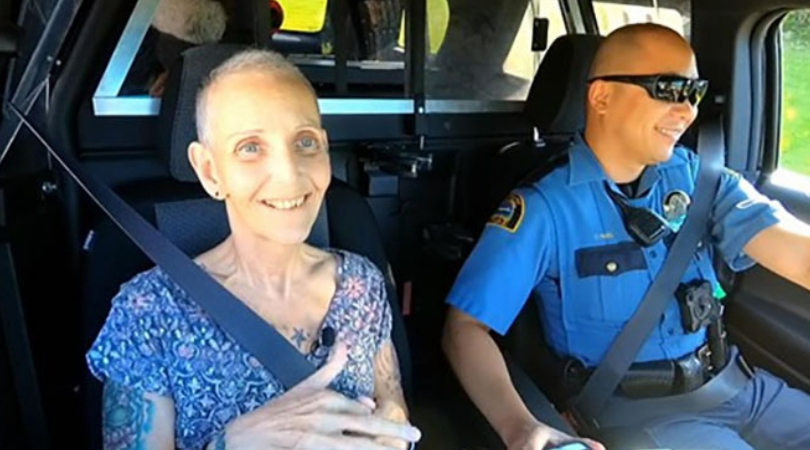 A Minnesota woman with terminal cancer decided to go all out and create a very adventurous bucket list wish. Stephanie Anderson spent her professional career taking care of others every day, which is why this time she decided to take care of herself. The ill nurse found herself in the passenger seat of a cop car crossing off one of the coolest wishes I have ever seen.

Anderson was diagnosed with ovarian cancer four years ago. She was then told by her doctor that the tumors in her brain, spine, and lungs had stopped responding to treatment, leaving her with 6 to 12 months to live. Despite her diagnosis, Anderson says she keeps her hopes up and is living one day at a time. The nurse stated that it wasn’t for her cancer, she wouldn’t have time to cross off the items on her bucket list and be home to help care for her grandbabies.

So, she decided to make most of her time and posted on Facebook about her wish, asking for help from her friends and family members. The post read, ?As most of you know, I have a terminal diagnosis of cancer and am working on my bucket list. One of those things I want to do is a ride-along with the police department. Anyone out there has any suggestions for going about accomplishing things, I would be very grateful for suggestions.?

A Minnesota woman with terminal cancer found herself in the passenger seat of a police car, but it wasn't for committing a crime.https://t.co/RnBdd1DA1x#thebl #news #usnews #breakingnews

Less than three hours later Anderson wrote that she had already had several police officers reach out to her about her wish, which is how she successfully landed inside St. Paul Police Officer Te Yang’s patrol car for the first time. The nurse also met with Officer Eric Reetz who helped put the ride along in a police car and answered all the questions she had about the daily life of police officers. Safe to say the power of social media is truly wonderful. These cops are also pretty great for allowing her to ride along with them without hesitation.

I will say that riding in a cop car is so much fun. Well, depends on which side of the car you’re in, of course. A few years ago, I used to work as a reporter and asked my boss If I could do a story about cops who drive around at night. I wanted to see if the night watch was more difficult for officers. It was definitely a reach, but after a few begs, he finally agreed. So there I was, tagging along with a cop circling the streets of my hometown. It was terrifying, I won’t lie. There are a lot of things that happen at night, and we definitely don’t give cops enough credit for keeping us safe. But it was definitely worth it.

Editor’s note: This article was originally published on August 28, 2019.

Watch: Train Smashes Through Cop Car, and the Deputy Is Lucky to Be Alive