This Tree Legally Owns More Land Than Most City-Dwellers 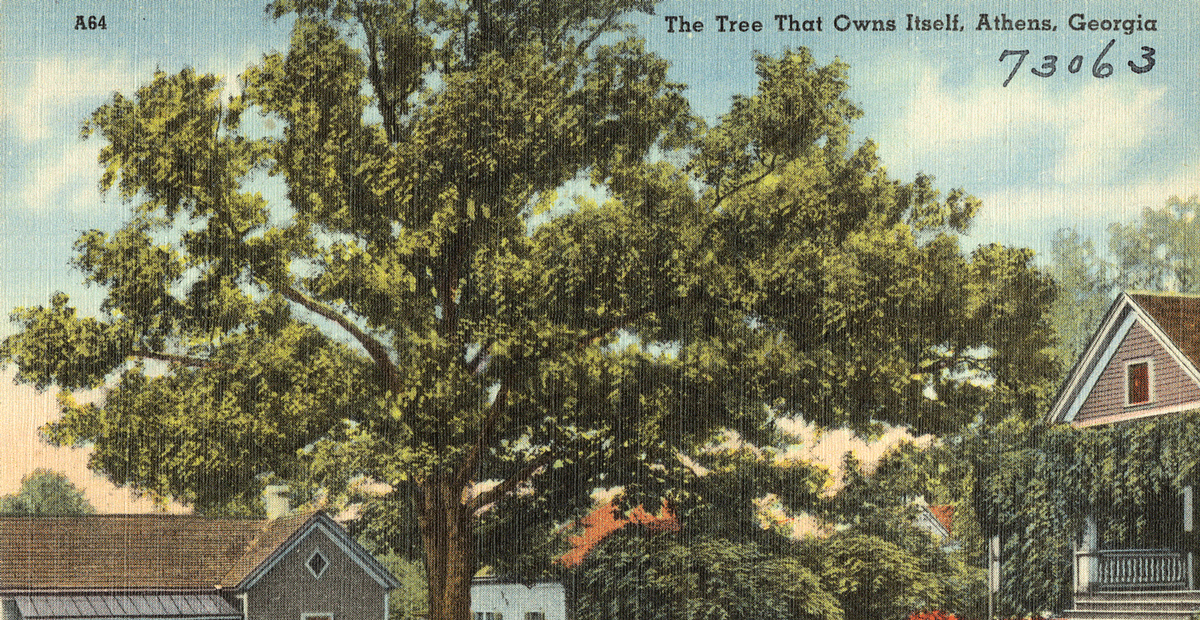 In Athens, Georgia, there is a tree that owns itself. That’s correct: A TREE THAT OWNS ITSELF. Legally. Hysterical, right? Try historical. The Tree That Owns Itself is a White Oak tree that claims ownership of itself and the land on any side of its base for eight feet. The tree initially sat on the property of Colonel William Henry Jackson, known as W. H. Jackson.

Estimates of its age began between the mid 16th-18th centuries. By the early 1800s, it was considered the tallest tree in Athens, Georgia and the most famous tree in the US. And maybe this was a coincidence, but it was also on the property of American royalty. Jackson was from a line of many Jacksons contributing to America’s beginnings. He was the son of James Jackson who fought in the American Revolution and later became a congressman and U.S. senator. W. H. Jackson was a professor at the University of Georgia and today, his sons continued to carry the Jackson legacy, pursuing both political and educational careers.

William H. Jackson recalled growing up with the tree and recalled many fond childhood memories of it. He felt the great desire to protect it, so he decided it should be deeded to itself. Thus, the tree has legal ownership of itself. His deed to the tree, which occurred between 1820 and 1832, was as follows:

“I, W. H. Jackson, of the county of Clarke, of the one part, and the oak tree … of the county of Clarke, of the other part: Witnesseth, That the said W. H. Jackson for and in consideration of the great affection which he bears said tree, and his great desire to see it protected has conveyed, and by these presents do convey unto the said oak tree entire possession of itself and of all land within eight feet [2.4 m] of it on all sides.”

As the tree aged, it fell victim to erosion at its base around 1906. In 1907, a gruesome ice storm hit the area, and the tree was weakened by rot. Unfortunately, the original Tree That Owns Itself fell in 1942. Like any good story, there’s speculation around the tree’s final demise.

One story claims it fell in October of 1942, just as the move to replace the tree with its son was underway. Some say that the tree had root rot and was dead years before it collapsed. As the tree was anywhere between 150 to 400 years old and over 100 feet tall, it makes sense that its aged roots simply could not hold it any longer. Another story claims that the tree collapsed two months later, in December of 1942 due to a violent windstorm that wreaked havoc around north Georgia.

It's a perfect day here in Athens to stop by and take a look at the beautiful tree.

After the original Tree That Owns Itself collapsed, the Athens’ Junior Ladies Garden Club found the most suitable seedling to replace its predecessor. The new tree was planted and dubbed “The Son of The Tree That Owns Itself”. This tree owns itself as well, receiving the same rights and it tree sits on a hill on the corner of South Finley Street and Dearing Street.

The Son of The Tree That Owns Itself has become one of the most well-loved symbols of Athens, along with the city’s double-barreled cannon. To this day, both symbols have been featured in many publications such as the  “Athens Weekly Banner” (one of the first to discuss the tree in 1890) as well as “Ripley’s Believe It Or Not” on many occasions throughout the ’80s and ’90s.

There is also a Tree That Owns Itself in Eufala, Alabama, on scenic Lake Eufala at the border of Alabama and Georgia. It was granted its independence in 1935, but the Walker Oak was destroyed in 1961 when a tornado came through town. New trees have been planted with each claiming the land, but the Athens, Georgia tree is the more common reference.