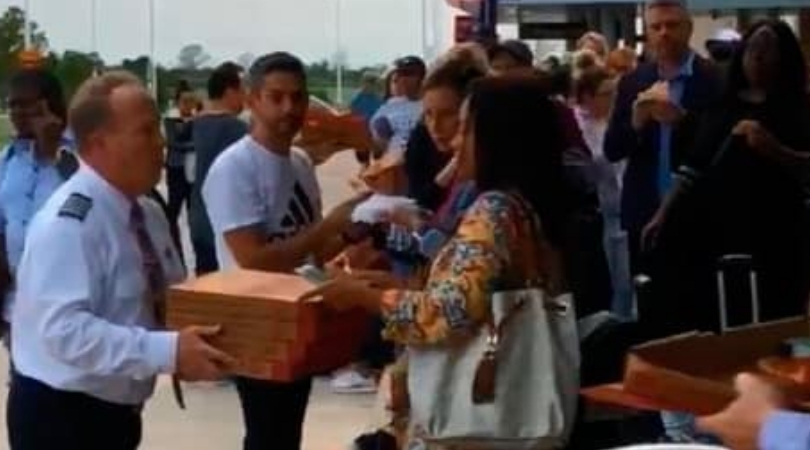 The last time I was on a delayed flight, I was exhausted, hungry, and annoyed at the whole situation. The airline, being like any other airline, tried to keep us all calm by giving us some ‘snacks’ to keep us happy and at bay with the whole situation. By snacks, I mean peanuts and pretzels, which I’m not a fan of, but hey, they tried. It was their way of saying, “We’re sorry your flight is delayed 3 hours, but here’s some food for you.” Clearly, they didn’t get the memo of what crew should do, after a captain for American Airlines had the same idea, but honestly, his execution was way more impressive and delicious!

Jeff Raines was hailed as a hero after deciding to cheer up his 159 frustrated passengers the only way one should: free food! Due to a severe thunderstorm, American Airlines Flight 2354 from Los Angeles to Dallas-Fort Worth was diverted to Wichita Falls, Texas, landing at Wichita Falls Regional Airport. Seeing how tired and agitated his passengers were, he put it upon himself to save the day by ordering 40 pizzas from Papa John’s for delivery to the airport. Because let’s face it, no matter how tough life gets, everything is better with pizza. The video was posted by Josh Raines (yes, they are both Raines), who works at the airport, where one can see the captain running back and forth between the delivery car and passengers, handing out the pizzas.

@AmericanAir The Captain of Flight 2354 bought pizza for everybody who was stuck in Wichita Falls Regional airport after a weather diversion. I don’t think I’ve seen this before. pic.twitter.com/sLmo76ckUB

Through a statement on Facebook, the captain implied that helping the passengers was a team effort. He explained how his first officer was on the phone with the tracking crew and the hotel desk, arranging for their release and hotels for the entire crew. Flight attendants manned a gallery car from the aircraft serving water, soda, and juice for all passengers in the terminal. And while the Envoy SPS personnel were arranging for a bus and rebooking flights, they were also answering all question from passengers. He finished his statement by saying, “Thanks to everyone for your help—there is no “I” in TEAM.” After their ‘impromptu pizza party’, the passengers were able to re-board the next morning and continue on their journey to Dallas-Fort Worth.

WHAT A MAN! I mean, it’s safe to say diversions are inevitable, and sometimes delayed flights can be expected, but the way this captain handled his passengers was pretty amazing. He certainly didn’t need to put in that much effort, let alone spend that much money, but he did. The world needs more people like Jeff Raines, this man deserves a lifetime achievement award, some sort of raise, or something. Here’s hoping that we all get a captain as generous as him on and off the air.