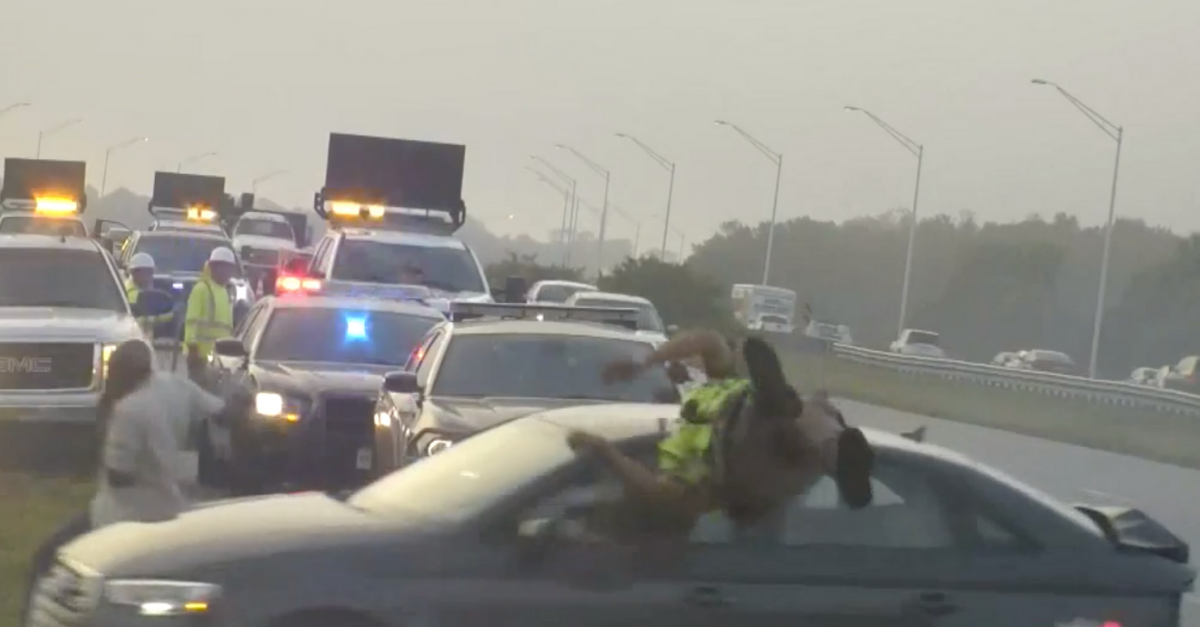 A Florida Highway Patrol Trooper is in the hospital after a freakish series of events that ultimately ended with him pushing a civilian out of the way of an out of control car and taking the impact himself. 31-year-old Florida Trooper Mithil Patel is currently hospitalized with serious injuries.

Patel’s heroics were actually caught on video by the local West Palm Beach CBS affiliate WPEC, who were on the side of I-95 north of West Palm Beach, like Patel, because of another car accident that had already occurred. In the video, Patel is seen speaking with Rony Bottex, a victim in the first accident.

As they’re speaking on the side of the road, the video shows a black Audi being struck from behind by a Chevrolet Express before spinning out of control directly toward Bottex and the Florida State Trooper. Thinking quickly, Patel pushes Bottex out of the way and is thrown into the air after being struck by the spinning car.

Here’s the footage from WPEC CBS 12:

That is peak protecting and serving. It’s a big country but Patel earned himself Police Officer of the Week honors here, I think.

Bottex survived his second Interstate 95 accident of the day with just an injured knee. He says Patel saved his life. Patel, meanwhile, is in good condition at St. Mary’s Medical Center, though his injuries are serious.

A big expression of appreciation to Patel is due here. He literally sacrificed his body to save someone’s life. You literally cannot ask more of a police officer. Imagine having the balls to willingly stand your ground in front of a couple thousand pounds of death hurtling right toward you. That’s what Patel did. Nicely done, trooper.

This story was originally published December 4, 2018.

Watch: Honoring Those Who Wear the Blue Uniform to Protect Us This Police Week