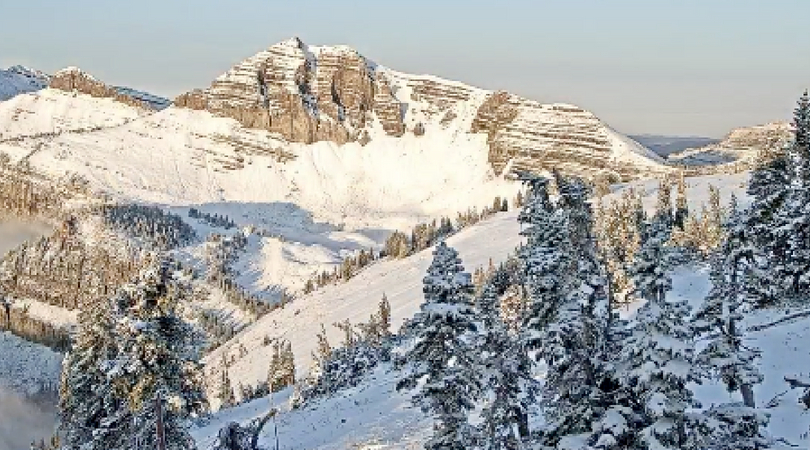 Snow in August? Yes, there is actual snow in August, and it?s the weirdest thing we have ever seen. Well, almost. Still, it was an unusual cold week (even though it’s Tuesday) for Wyoming, Montana, and Idaho, after rain and some high altitude weather decided to drop in a tad early. The National Weather Service stated as much as 4-8 inches could fall in elevation above 9,000 feet in the mountains of Wyoming and Montana! You know what that means, time to pull out the coats a bit early this year.

Several residents in Montana could see a good coating of snow in Glacier National Park, first receiving some wind and then a cold front. A few weeks ago, Yellowstone was under lockdown after experts reported rock cracks near Yellowstone volcano, but now the climate has shifted and it was actually surrounded by yes, you guessed it, snow! The cold conditions were brought on by a strong cold front and a dip in the jet stream. I’m sure it was enjoyed by many, after the extreme hot weather we have been having recently. Especially in areas where there are a lot of persistent smoky conditions due to the wildfires in the Western United States and Western Canada.

Check out these #BeforeAndAfter of @GlacierNPS! We traded smoky air for a more fall-like scene with fresh air. 💦🏔️#MTwx #glaciernationalpark
Cameras courtesy of GNP pic.twitter.com/BEBwm1sHOm

Some surrounding areas have been placed under Winter Weather Advisory. Colorado is on the extreme southern edge of this cold weather system, and will be windy as it passes by. Colder air will fall into the northern and northeast areas by Tuesday, with high temperatures of whopping 20 to 30 degrees! Yikes…and to think it?s only August. Still, totally worth it though, just look at those mountains!

Fog dissipating this morning as the sun rises on a snowy Cody Peak! #wywx pic.twitter.com/mIjDVBv5Zd

Watch: Great Pyrenees Are Built for the Cold!