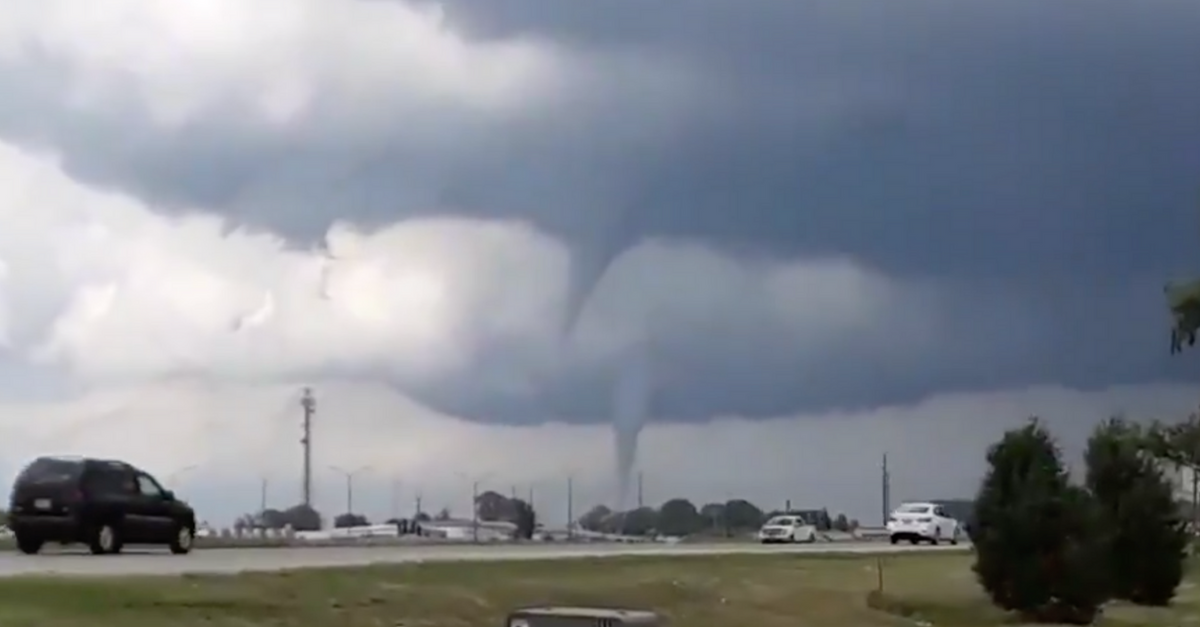 Growing up in the Midwest, one gets pretty desensitized to tornado warnings. Pretty much any dark cloud that floats by your town between the months of March and September, is accompanied with a tornado warning and, quite often, a shrug from the locals.

“Eh, it doesn’t really look like something astoundingly violent is going to drop down on our heads today. Screw it, get in the car kids. We’re still going to Dairy Queen. It’ll be fine.”

Until the tornado sirens start blaring, it’s just windy out.

But when it gets real, it gets real real fast, and every Midwesterner knows to haul ass down to the basement.

That was, unfortunately, the case throughout Iowa yesterday, where a series of tornados hit in and around the towns of Pella, Marshalltown, and Bondurant, among others.

People from around the area caught the tornados on video and they were nasty. In them you can see buildings and houses being destroyed, power lines exploding, and some giant, terrifying, rotating clouds that look like they could chuck a tractor like it was a toy.

Another video of the tornado in #Marshalltown courtesy of Bradlee Robert #iawx pic.twitter.com/qEc9xnDG2Q

There is a whole lot of nope in those videos. Especially the first one. That guy is way too close to those tornados to just be standing there filming. Quick tornado rule of thumb: if you can see things exploding, go inside.

He’s lucky he didn’t have a telephone pole tossed through his torso, or maybe have an errant two-by-four from one of those freshly demolished houses rocket over and take a clean piece out of his skull.

The aftermath of the storms was, predictably, not great.

Clean up is underway in Marshalltown. It's still a mess downtown. pic.twitter.com/KLUWRAoeYL

Literally nothing left of this home along Mallard Pointe Drive in Bondurant. Second story is gone and everything inside sucked out during Thursday’s tornado. This same home was flooded with water in the basement two weeks ago during the flash flood in late June @weareiowa5news. pic.twitter.com/8wgs1YG70T

Extensive damage at JBS Swift and Company in Marshalltown pic.twitter.com/2R4BYIbskd

Wow. Take a look at this INSANE video from Cody Henderson – SVLMedia who was at Vermeer Manufacturing in Pella when the tornado ripped through that area yesterday. pic.twitter.com/ohAikzBzpY

Among the places damaged were a hospital in Marshalltown, as well as a lot of businesses in the downtown area, and the Vermeer plant in Pella.

Read More: Woman Impaled by a Flyaway Beach Umbrella on the Jersey Shore