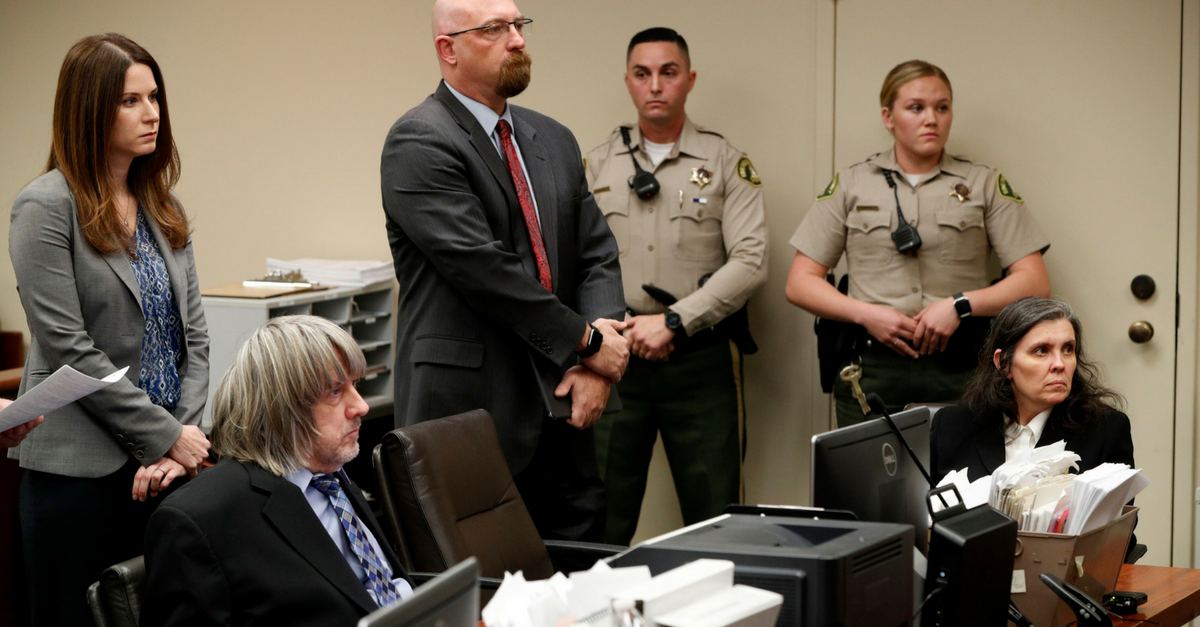 Los Angeles Times/Gina Ferazzi via AP, Pool
David Allen Turpin and Louise Anna Turpin appear in court with their attorneys in Riverside, Calif., Wednesday, Jan. 24, 2018. David and Louise Turpin are accused of abusing their 13 children, ranging from 2 to 29, before they were rescued on Jan. 14 from their home in Perris. They have pleaded not guilty to torture and other charges. On Wednesday, a judge signed a protective order prohibiting the parents from contacting any of their children, except through attorneys or investigators. (Los Angeles Times/Gina Ferazzi via AP, Pool)

According to a former neighbor, the California “torture house” family mysteriously disappeared from their Texas home in 2010 just days after one of their thirteen children escaped and went looking for help, prompting rumors that the parents simply uprooted and reset whenever their kids got wise about their abuse.

“All of a sudden they just disappeared,” the neighbor said. “No one ever saw them again.”

David and Louise Turpin moved their family around often and suddenly left the Texas home they had lived in from 1999-2010 after one of their children allegedly got out of the house in search of assistance. According to the neighbor, the girl “went walking down the road” when another neighbor saw her and took her back home. Before they arrived at the then “torture house,” the girl asked to use a telephone. The neighbor believes she called 911 because the family vanished a few days later.

RELATED: An uncle wants to adopt the ?torture house? kids, but did he know about their parents? abuse?

“It wasn’t until about a few days later that they left,” she said. “They just disappeared. He didn’t make any more payments on that place or anything.”

The Riverside District Attorney indicated that the parents’ ongoing alleged abuse may have begun while the family was living at the home in Texas. At one point they moved into a mobile home on the property and even stayed at a separated home than their children on some occasions, coming by every now and then to drop off food.

The Turpins were arrested earlier this month after one of their daughters managed to climb out of a window in their California home and call the police. They face 94 years to life in prison if convicted of the 38 charges pressed against them, including child abuse, torture and false imprisonment. On Wednesday, a judge barred them against having any direct or indirect contact with their children and ordered them to stay at least 100 yards away from them at all times. They have both pleaded not guilty to their alleged crimes.

RELATED: The 13 children freed from the California ?torture house? are being separated from one another