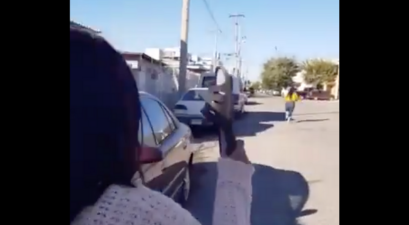 The Swedish clothing store known as H&M may have apologized for an advertisement showing a black child wearing a sweatshirt that said “coolest monkey in the jungle,” but that apology was clearly not accepted in South Africa, as protests by the Economic Freedom Fighters (EFF) ended with serious property damage.

In case you missed it, the ad pictured below sparked backlash around the world.

H&M stores stormed in Africa over 'monkey in the jungle' sweatshirt ad https://t.co/szQGXB9T8H

H&M said on Tuesday that it was “deeply sorry that the picture was taken” and promptly removed both the ad and the product.

RELATED: IKEA apologizes for “sexist” commercial about women without boyfriends

Images of the destruction at stores circulated so far and wide that the unrest became a Twitter Moment.

Here’s how EFF describes itself, in part:

The EFF is a radical, leftist, anti-capitalist and anti-imperialist movement with an internationalist outlook anchored by popular grassroots formations and struggles. The EFF will be the vanguard of community and workers’ struggles and will always be on the side of the people. The EFF will, with determination and consistency, associate with the protest movement in South Africa and will also join in struggles that defy unjust laws.

In one instance, officers fired rubber bullets to disperse the protesters, the police added.

H&M addressed the situation in South Africa this afternoon, saying it was closing stores in the area and that store staffs had nothing to do with its aforementioned “poor judgement.”