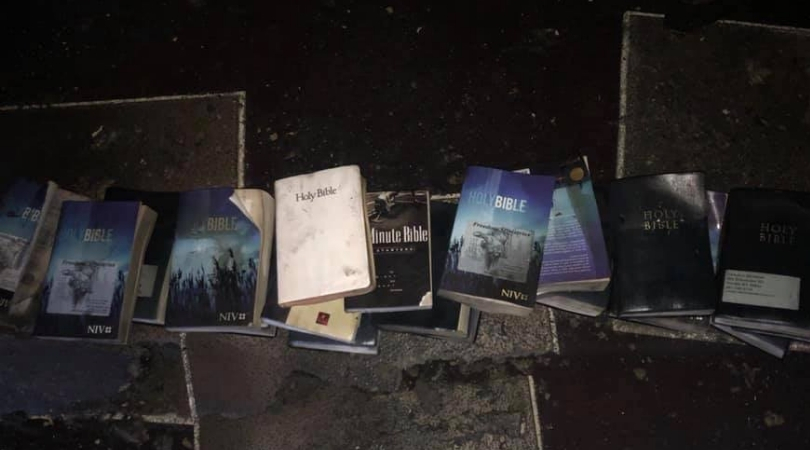 It was definitely a spooky but incredible discovery Sunday for firefighters in West Virginia after they responded to a call at Freedom Ministries Church in Grandview in the middle of the night. When firefighters arrived, the devastating fire was reportedly so hot that several men had to go in and out numerous times, racing through the building in flames.

After what seemed like hours, the Coal City Fire Department managed to put out the church fire as fast as they could but were shocked by what they found in the rubble of a church fire. Some might say a miracle, others coincidence, but what is truly unexplainable was the fact that firefighters noticed not a single Bible or a single cross inside the West Virginia church was harmed in any way shape or form. West Virginia Firefighters called this extraordinary since the fire should have destroyed everything inside the building due to the heat of the flames.

The department quickly created a Facebook post to show their findings, and not shockingly enough, it quickly went viral. The post shows all Bibles laying together in a stack, surrounded by burnt ash and a single church’s cross found untouched. Now, can this purely be a coincidence because the untouched Bibles were really big, and the fire couldn’t get to the inside? Well, maybe? But it sure is kind of creepy. It makes you second guess everything, that’s for sure! But then again, the church kind of did burn down in a massive fire…so?

The cause of the fire remains unknown, but the firefighters thanked God for protecting the men in the midst of the smoke, saying that although the odds were against them, God was not. And I’m sure during the incident, prayers to Jesus were being said in fear of safety and for protection.

Editor’s note: This article was originally published on March 5, 2019.