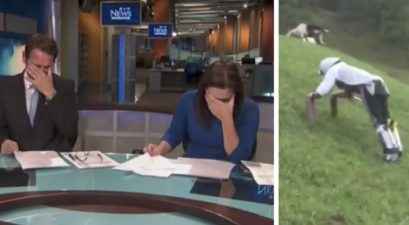 Authorities have used aerial footage of a nightmarish accident on a Missouri highway as a warning to drivers.

As reported by the Springfield News-Ledger, icy conditions led to massive pile-ups on various sections of I-44. Over 100 vehicles were involved in crashes at three different locations, the worst being at the 106 mile marker. Everything from cars to tractor-trailers were affected.

The footage of the large accident, which occurred earlier in the week, is shocking.

At least two people were reported dead in what is thought to be the largest accident ever to occur in southwest Missouri. About 70 were injured.

“It was an accident bigger than any of us have ever seen. I have been in this for 34 years and I have never seen one this big,” said Chief Fred Savage of the Conway Volunteer Fire Department, via KY3. Captain Rick Fletcher of the Marshfield Fire Department recalled, “It was kind of like an organized chaos.”

Eddie Vasey of the Conway Volunteer Firefighters described some of the difficulties first responders faced, which included finding a way to get to the injured.

“There was multiple people, about 40 people who were walking around injured so we had to assess them quickly and then get our equipment and get to the vehicles that need our help and that had people trapped,” he said. “We were having to crawl under semi’s and go around all these obstacles and try to get people who were stuck in their cars.”

The Missouri State Police and the Missouri Department of Transportation have since used the crash to post warnings about traveling in such weather.