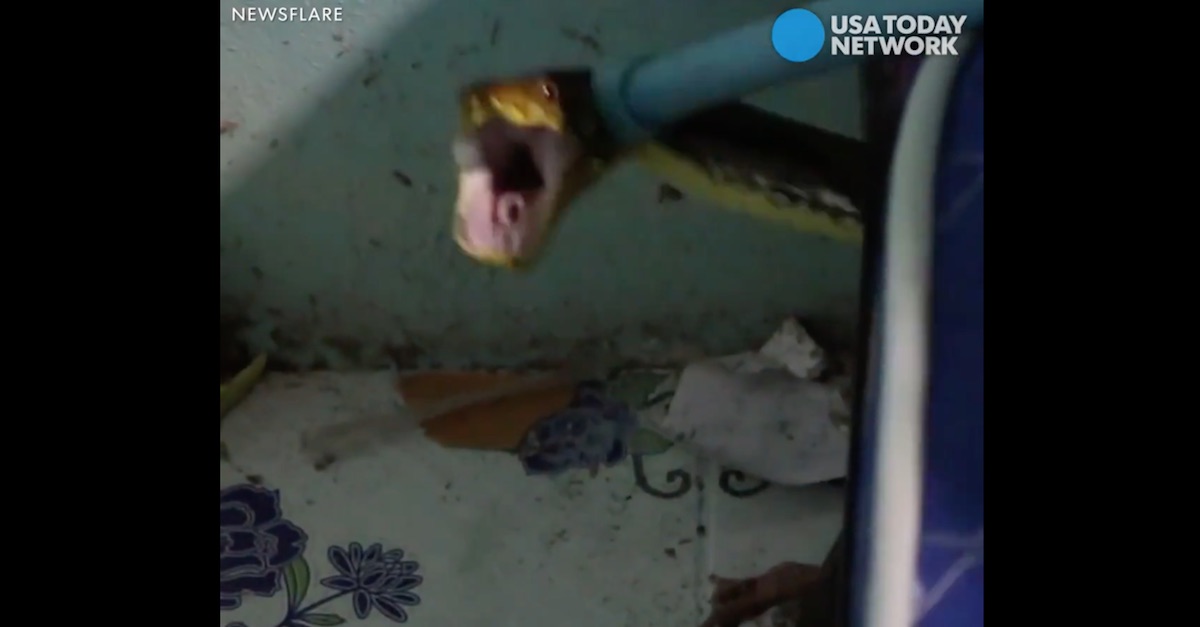 Is Mr. Animal Control going to have to smack a snake?

RELATED: Even this snake catcher was rattled by the “monster” found living under a home in a Louisiana

A mom disturbed by the finding of her kitty dead outside of her son’s window tried sneaking around the house to the find the culprit. And, what did she find? Just a 10-foot-long python under her kid’s bed.

If we were in the same situation, we might have just burned it all down and started over, but 42-year-old mom Thanapoom Lekyen was determined to get this creature the hell out of the house.

The snake broke into the Chachoengsao, Thailand, home through a window after killing the cat and ended up nestling itself between a wall and a bed in her 13-year-old son’s room.

According to the Daily Mail, the boy, named Nong, fell asleep in his mom’s room the night before and that may have made all the difference.

“I woke up in the morning and saw the dead cat outside with bite marks on,” the woman said. ‘Then I knew there was a problem, and I shivered and my stomach was feeling sick. I was scared. I looked in my son’s bedroom and screamed when I saw something moving under the bed.”

“I think about what might have happened and cry,” she added.

Snake catchers soon arrived on the scene after the python discovery and it took a while for them to coax the snake out and lasso it.

But they got the job done.

One thing people on the internet have noticed and taken delight in is that one snake handler, identified as Nattapon Boonmee, smacked the python after he was bitten.

RELATED: Parents found a venomous snake hiding inches away from their baby’s crib and called in experts to remove the threat

“The snake was average size but very, very aggressive. My hand was bleeding from where it bit just a little bit,” he would say after the successful removal. “A more powerful bite and an attack from a [snake] like this would be very, very dangerous.”