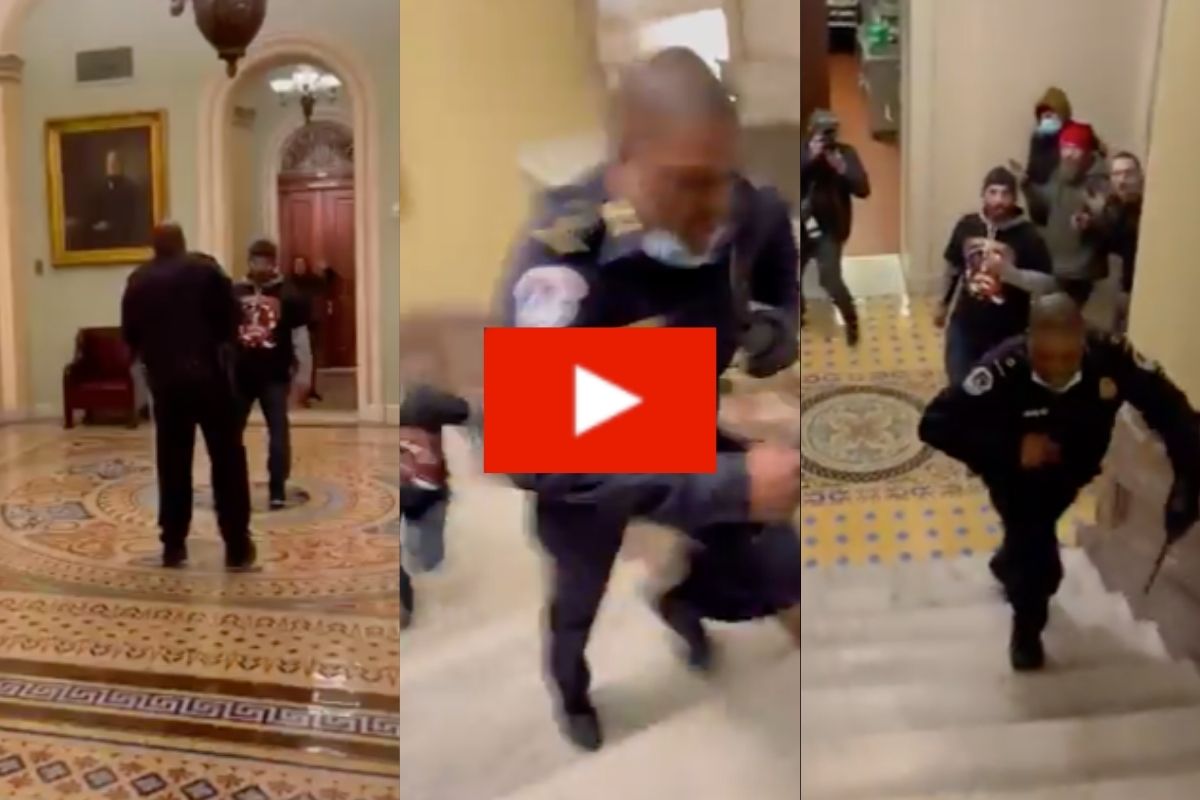 Eugene Goodman is the name of the man, a lone Black police officer who bravely made an important impact on the storming of the U.S. Capitol. As many will remember January 6, 2021, as the dark day that pro-Trump rioters protested current President Donald Trump’s loss of the 2020 presidential election to President-elect Joe Biden, this U.S. Capitol police officer made a quick decision that minimized the damage as much as possible. And his story deserves to be heard.

As the angry mob of Trump supporters were rushing the Senate chamber of the Capitol building last Wednesday, a viral video captured Goodman making smart quick decisions that led the group away from the Senate and into a group of more police officers. The video, that went trending on social media, shows Goodman, armed with only a baton, confronting a part of the mob led by Doug Jensen, and a man wearing a black QAnon shirt from Des Moines, Iowa.

Here’s the scary moment when protesters initially got into the building from the first floor and made their way outside Senate chamber. pic.twitter.com/CfVIBsgywK

Realizing he’s alone, Goodman acts quickly, glancing to his left where the empty hallway leading to the Senate is. He then coerces the group to follow him, as he leads them in the opposite direction. Jensen and his pro-Trump mob, a group of all White men only, chase Goodman filing away from where lawmakers were supposed to be meeting. Goodman keeps enticing the group to chase him, eventually leading them to where the rest of law enforcement was, where he could finally get back up in helping calm the storm.

Jensen, 41-years-old, was soon arrested by the FBI in his Iowa home and booked into Polk County Jail. His employers, Forrest & Associate Masonry, has announced that he has been fired. Rep. Bill Pascrell Jr., D-N.J. said on Twitter, “As trump’s fascist mob ransacked the US Capitol, this brave USCP officer kept murderous rioters away from the Senate chamber and saved the lives of that inside. God bless him for his courage,” and CNN reporter Kristin Wilson said, “His name is USCP Officer Eugene Goodman. Remember his name. He almost certainly saved lives on Wednesday. My thanks, Officer Goodman. THANK YOU.”

Igor Bobic, a politics reporter for the HuffPost, had originally posted the video of Goodman and the Capitol riot on Twitter, and also defended the video when many called it “staged.”

“I’m seeing a lot of tweets, some of which are being shared widely, calling this video “staged.” This is ridiculous. It wasn’t staged. I recorded it. You can see how alarmed the officer was. It shows how little police presence there was once the rioters made their way into Cap”