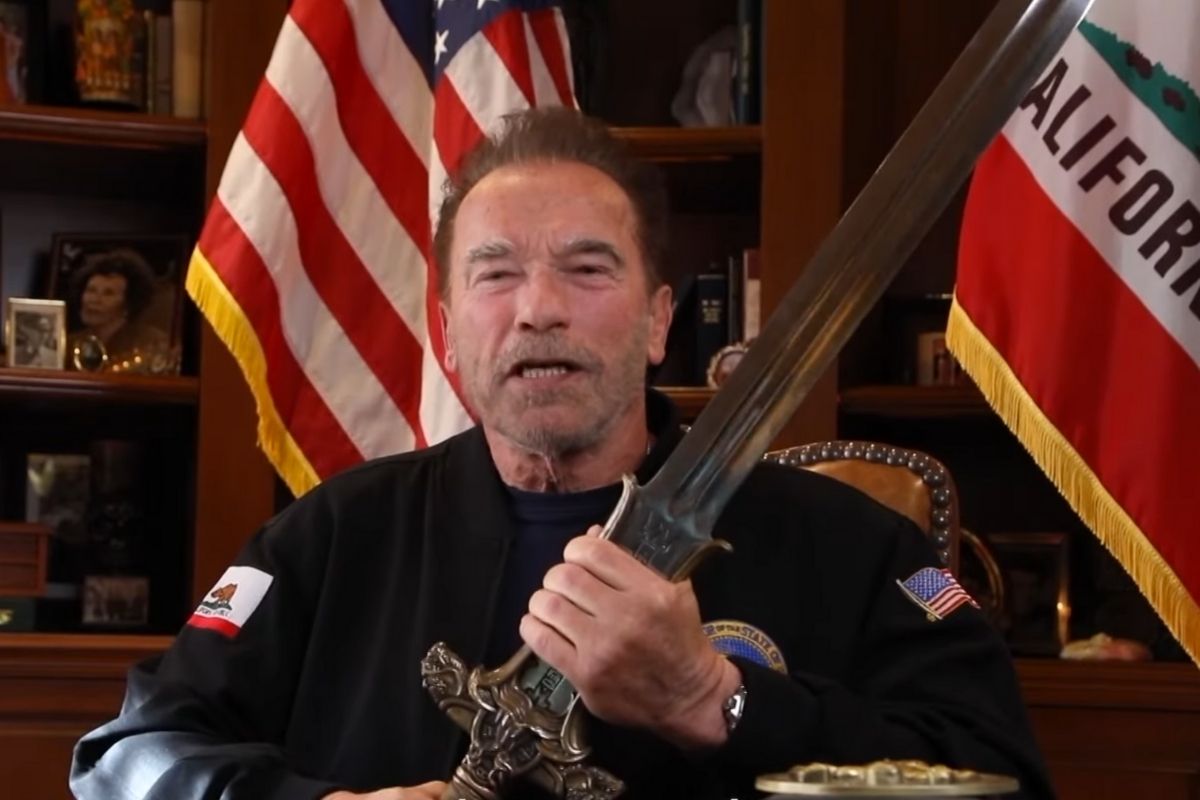 Yesterday Arnold Schwarzenegger came out against the rampage at the Capitol. Hard. In a personal video message, the former California governor directly connected this heightened political moment to the fervor of Nazi Germany — an era that haunts Schwarzenegger for very personal reasons. In the video, the “Governator” fully embraces his tough, heroic persona — to passionately lambast the compliant Trump administration. And it’s not his first time doing so.

Arnold Schwarzenegger became a Republican as soon as he emigrated to the United States in 1968. Witnessing Richard Nixon debate Hubert Humphery on live television, Schwarzenegger reportedly took to the GOP for its opposition to the socialism lauded in his native Austria. In the liberal environment of Hollywood, the young bodybuilder stuck proudly to conservative beliefs throughout his adult life. His political affiliation became well-known while campaigning for George H.W. Bush in 1988. But it would be years before the hunky action star made a play for office.

Arnold Schwarzenegger, by the far the most recognizable name on the ticket, won the bid to become Governor of California in a 2003 recall election. Schwarzenegger remained in office for two terms. During that time, he maintained a “supermoderate” Republican stance, supporting social causes such as pro-choice abortion and same-sex marriage. During his candidacy, non-partisan On The Issues rated Schwarzenegger as a “moderate liberal populist.” Schwarzenegger made a successful career out of appearing a centrist in the large and diverse state of California.

Today, House Democratic lawmakers have introduced new articles of impeachment against Donald Trump. Talks of invoking the 25th amendment to remove him from the White House — just days before the end of his presidency — are well underway. While Nancy Pelosi and others scramble to action, there is certainly no question where Arnold Schwarzenegger stands on the issue… and on the altered landscape of his own party.

By this point, many public figures have spoken out condemning the violence in Washington D.C. last week. Discussions linking Donald Trump’s incitement of the Capitol riot to the hateful actions of Adolf Hitler are now commonplace. (Hitler staged his own failed coup in 1923.) But Arnold Schwarzenegger voices his criticism with full historical context. He likens the rush on the Capitol building to Nazi Germany’s infamous Kristallnacht, or “Night of Broken Glass”. On Kristallnacht, in 1938, German police officers and authorities looked the other way while civilians raged through the streets, destroying Jewish stores, synagogues, and public buildings — murdering those in their path with impunity. The shards of glass that littered the streets that dark day gave Kristallnacht its notorious name.

“The broken glass was in the windows of the Capitol,” Arnold Schwarzenegger says in his message. While Kristallnacht shocked the world in 1938, but those within Germany and Austria looked on passively. Now it must be different. Now, Schwarzenegger contends, is our moment for collective action. When angry rioters easily overtook the Senate and House proceedings, they “shattered” the very principles we take for granted. American constitutional liberty, while imperfect, is an ideal internalized from a young age in the United States. A dictatorship that erodes it, bit by bit, can be hard to recognize. But Schwarzenegger sees the pattern clearly.

Born in Austria in 1947, Arnold Schwarzenegger grew up surrounded by those who had participated in “the most evil regime in history.” He describes these broken men, ex-Nazis, frankly: drinking away dark memories. Among them was Schwarzenegger’s own father, who he says drunkenly terrorized their family. According to Schwarzenegger, this twisted abuse was epidemic in the aftermath of World War II. Although we may not be on the precipice of a world war (for now), Schwarzenegger implores viewers to keep the dire consequences of “selfishness and cynicism” in mind. He breaks it down:

I. “President Trump sought to overturn the results of a fair election.”

II. “He sought a coup by misleading people with lies.”

Arnold Schwarzenegger offers a quote from Teddy Roosevelt to unyielding Trump supporters: “Patriotism means to stand by the country. It does not mean to stand by the president.” Schwarzenegger himself is a longtime Republican — and still is. But he maintains that Trump will “Go down in history as the worst president ever.” Schwarzenegger then raises his support of president-elect, Joe Biden, to epic proportions by unsheathing his iconic Conan sword from his 1982 breakthrough, Conan the Barbarian.

Backed by dramatic music, Schwarzenegger cinematically equates American democracy to the steel of the Conan sword. The more the sword is tempered, the stronger it becomes. Blurring the lines between action hero and public servant, the Terminator actor reminds Americans what a badass celebrity politician actually looks like.

This viral video is not the first instance of Arnold Schwarzenegger speaking out against fascist rumblings within the Trump administration. He delivered a video message in the wake of the white nationalist rally in Charlottesville, VA, which was organized by pro-Trump Proud Boy Jordan Kessler. In the 2017 clip, Schwarzenegger roasted Trump’s “both sides” rhetoric and opened up about the inescapable trauma of his homeland’s former Nazis, now shamefully “resting in hell.”

WATCH: Arnold Schwarzenegger to white nationalists: “Your heroes are losers”