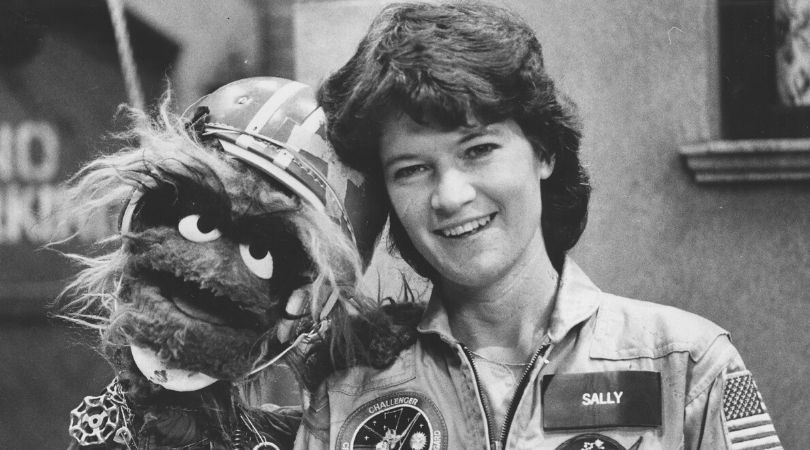 The first American woman in space was Sally K. Ride, and unfortunately, she isn’t given enough credit for it. Along with working with NASA, being a lifelong promoter of women in STEM, she was an engineer and physicist. She was such a big deal that the U.S. Navy named a ship and a spot on the moon after her. Oh, and she flew her own plane to her wedding. Need I say more?

Sally was ever curious, something that truly led her achievements. She believed science was a puzzle and that was a challenge she readily accepted. As a child, she was self-aware and ambitious. By the time she was 10, she was under the tutelage of two times Wimbledon winner, Alice Marble. She was urged to go pro but had other plans. She earned her Bachelor’s degree in Physics and English at Stanford University, continuing to complete a Ph.D. in astrophysics.

Sally saw an ad for NASA in Stanford University’s newspaper seeking new applicants for the astronaut program. For the first time, women were allowed to apply. Out of a total of 35 new astronauts, only six female astronauts were chosen. She moved up quickly. At 32, she was the youngest and first American woman to make it into space.

Sally was a mission specialist on the 1983 space shuttle Challenger flight with four other crew members. Skyrocketing her career, Ride left the atmosphere again the next year, she was then the first woman to go into space twice. The following Challenger disaster halted her third trip. Her second trip was the last time she went into space. However, she contributed to the NASA organization in a wide range of roles.

Later she was the head of the Office of Exploration. She was so in demand that the president offered her the Head Administrator role twice, by Clinton and Obama. She served on the Challenger and Columbia investigations.

On this day in 1983, Dr. Sally Ride becomes the first American woman to travel into space aboard the shuttle. During the six-day mission, Ride, an astrophysicist from Stanford University, operated the shuttle’s robot arm, which she had helped design. Her historic journey was preceded almost 20 years to the day by cosmonaut Valentina V. Tereshkova of the Soviet Union, who on June 16, 1963, became the first woman ever to travel into space. The United States had screened a group of female pilots in 1959 and 1960 for possible astronaut training but later decided to restrict astronaut qualification to men. In 1978, NASA changed its policy and announced that it had approved six women to become the first female astronauts in the U.S. space program. The new astronauts were chosen out of some 3,000 original applicants. Among the six were Sally Ride and Shannon Lucid, who in 1996 set a new space endurance record for an American and a world endurance record for a woman during her 188-day sojourn on the Russian space station Mir. #NASA #SallyRide #Space #History #WomensHistory #Repost @history #neildegrassetyson

After leaving NASA, she taught physics at the University of California, San Diego. To encourage women to pursue STEM careers she founded Sally Ride Science to teach young girls STEM literacy and boost professional development with Tam O’Shaughnessy. They also wrote children’s books, like mission Planet Earth, discussing climate change and space. In honor of the 40th anniversary of the moon landing, Louis Vuitton featured her, Buzz Aldrin and Neil Armstrong in an ad.

Sally ride died in 2012  after a battle with pancreatic cancer. President Barack Obama awarded her a posthumous Presidential Medal of Freedom. In the words of a NASA administrator, “Sally Ride broke barriers with grace and professionalism — and literally changed the face of America’s space program,” and the world is truly a better place because of her representation.