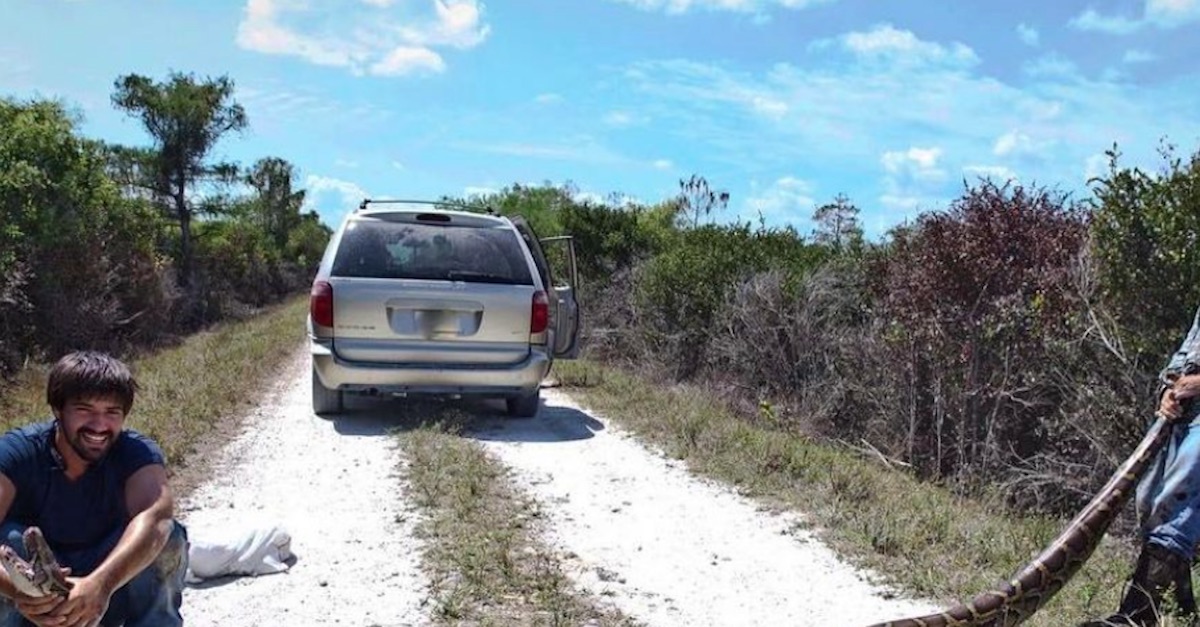 Pythons have been getting serious press overseas lately, popping up in the news for kills of a hyena, an antelope and even an adult man.

Two snake hunters who recently went to the Florida’s Everglades didn’t find a python killing anything, but they did find one that was 15 feet long and weighed 144 pounds.

It happened on the first day Nicholas Banos and Leonardo Sanchez joined a snake hunt called the Everglades’ Python Challenge, a “conservation effort helped protect the rare Everglades ecosystem and the animals that live there from these invasive, nonnative snakes,” according to the website.

Banos posted pictures of the massive snake on Facebook.

“The first day of the challenge, we caught the biggest snake,” Nicholas Banos told WSVN. “[Sanchez] goes, ‘Python, python!’ Second, I get out of the car, it’s this big python stretched there where the trees meet the water,” Banos said, “and when we jumped at it, he goes and grabs it by the tail. The second he grabs it by the tail, the snake starts to bee-line into the trees, so he tells me, ‘Go for the head, go for the head!’ I’m trying to get into the trees, because it’s all over the place.”

“I tried pulling it, so it wouldn’t go into the water, and the snake just straight bee lined towards my face,” he continued. “And that’s when [Sanchez] jumped in, and he jumped from behind, and he grabbed it by the head. He even got nipped a couple times.”

“I saw a little gloss, and I saw a big square brown patch, and automatically, I knew what it was,” Sanchez would add.

Pythons have been challenging the ecosystem of the Everglades for more than a decade.

Here’s what the National Park Service has said about pythons in the Everglades in recent years:

You read that right: more than 2,000 of the “largest snake species on Earth” have been removed since 2002, and that’s probably “only a fraction of the total population.”

RELATED: Watch a clueless hyena wander into a python’s domain and get swallowed whole in front of tourists

“We don’t hunt for sport. We’re not hunting to kill. We hunt to remove. Catch and remove,” Banos explained. “But having to kill it was a little rough. For us, we’ve never really had to do that before, so it was satisfying, but it was also a little bit of heartbreak.”