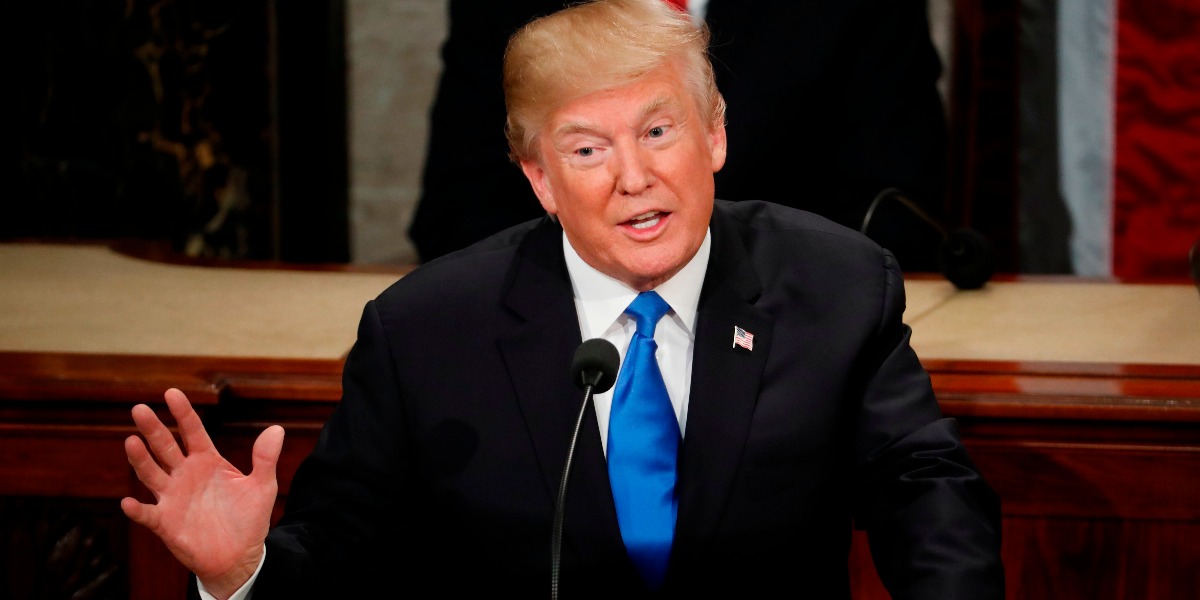 President Trump spoke in Ohio on Monday, and as is his wont, he strayed far from his ostensible topic, tax reform.

“Did anybody happen to see the State of the Union Address?” Trump asked his crowd. “Right? Okay. So I got good marks.” But he didn’t get “good marks” from everyone, which clearly had him peeved.

Democrats who didn’t applaud his address “would rather see Trump do badly, okay, than our country do well,” the president said. “That?s what [not clapping] means,” he continued, complaining that non-clappers are “very selfish,” sources of “bad energy,” “like death,” and “un-American.”

But he didn’t stop there. “Somebody said, ‘treasonous,'” Trump mused. “I mean, yeah, I guess, why not? Can we call that treason? Why not?”

Trump says the Democrats would rather see him “do badly” than the US do well: “Somebody said ‘treasonous’. I mean, yeah, I guess. Why not?” https://t.co/E2AOVJNiGE

RELATED: President Trump unloads on Democrats as ?treasonous? and ?like death? in fiery Ohio speech

Well, the reason we can’t call inadequate audience enthusiasm treason is because words have meaning and that is not what treason means. Robby Soave ably explained this over at Reason:

[T]reason has a specific definition: it involves levying war against the United States, or giving aid and comfort to its enemies. ‘Aid and comfort’ means actually helping a declared enemy of the United States?by sending them money, leaking sensitive information to them, etc. Merely signaling dissent from, or disapproval of, the current commander-in-chief is not treason; if it was, members of the out-of-power political party would have no real means of challenging the president’s agenda. Thankfully, the First Amendment guarantees everybody the right to criticize the government and its chief executive.

Predictably, Trump’s comments led to widespread uproar. So Tuesday morning, a White House representative named Hogan Gidley told NBC News the president was only kidding around. His comments, said Gidley, were “tongue in cheek,” a joke intended to make a point about the dangers of partisanship.

And you know what? That’s probably true. However crudely, Trump did seem to make an argument to that effect.

That doesn’t make the joke okay. This situation is a lot like Trump’s proposal that pro athletes who silently protest police brutality and systemic racism by kneeling during the national anthem should be fired. It’s also like his threat to revoke broadcast licenses of news outlets whose work he doesn’t like.

In all three cases, it’s pretty evident Trump won’t be acting on his threats. He never tried to legally force the NFL to fire players like Colin Kaepernick. He can’t revoke broadcast licenses for networks like NBC, because the federal government doesn’t offer that type of license in the first place. And it seems fairly safe to say Trump does not intend to charge all the Democrats in Congress with treason.

But Trump is still the president, which means he’s still the country’s chief law enforcement officer. So it’s one thing for a private organization like the NFL to regulate its employees? political speech on the job, or for a private citizen to complain about a news network or the behavior of elected officials.

But it’s a very different thing for our most powerful government bureaucrat, acting in his official capacity as president, to propose suppression of Americans’ free speech, or to suggest that members of Congress are treasonous if they don’t give him the support he desires.

As in those other two cases, I’m not saying Trump is violating the Constitution with these “treason” remarks. I am saying that the presidency is a powerful bully pulpit, and though Trump’s remarks aren’t policy, they certainly have an effect on what Americans feel is safe to say and do in criticism of our government.

Trump can air his grievances all he wants. But he must learn to do it without implicitly suggesting we gut the First Amendment.