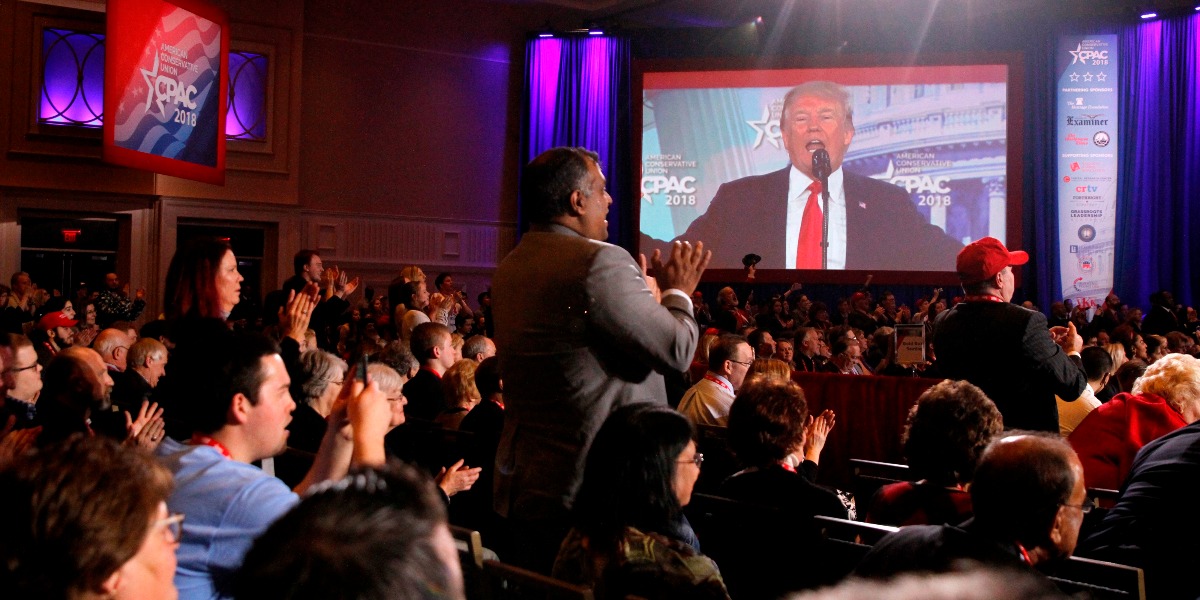 This past weekend’s Conservative Political Action Conference (CPAC) included a panel addressing the #MeToo movement of calling out sexual harassment and assault. One of the panelists, a conservative author named Mona Charen, drew boos from the audience when she argued the conservative movement generally and the Republican Party specifically needs to better deal with harassers and abusers in their own ranks:

“I am disappointed in people on our side for being hypocrites about sexual harassers and abusers of women who are in our party, who are sitting in the White House, who brag about their extramarital affairs, who brag about mistreating women,” she said, referring to President Trump and the infamous “Access Hollywood” tape in which he boasted of attempting to sleep with a married woman and grabbing women by the genitals without their consent.

“This is a party that was ready to endorse Roy Moore for the Senate in the state of Alabama even though he was a credibly accused child molester,” Charen continued at CPAC. “You cannot claim that you stand for women and put up with that.”

After her negative CPAC reception made headlines Saturday, Charen penned a scathing op-ed for The New York Times on Sunday.

I was surprised that I was even asked to speak at CPAC […] but when [the booing] came, I almost welcomed it. There is nothing more freeing than telling the truth. And it must be done, again and again, by those of us who refuse to be absorbed into this brainless, sinister, clownish thing called Trumpism, by those of us who refuse to overlook the fools, frauds and fascists attempting to glide along in his slipstream into respectability.

I spoke to a hostile audience for the sake of every person who has watched this spectacle of mendacity in disbelief and misery for the past two years. Just hearing the words you know are true can serve as ballast, steadying your mind when so much seems unreal.

Now remember, Charen is a conservative. She’s written books with titles like “Useful Idiots: How Liberals Got It Wrong in the Cold War and Still Blame America First” and “Do-Gooders: How Liberals Hurt Those They Claim to Help (and the Rest of Us).” Whatever charges may be leveled against her, insufficient loyalty to the right is not one of them.

That’s what makes potent her critique of the failings of policy and character we see in President Trump and his movement, if it deserves such a moniker. This is the kind of self-policing any healthy political group needs. Even if they don’t share her exact policy agenda, conservatives should welcome Charen’s demand for self-examination.

A word about her comments at CPAC specifically is in order as well. I am not a Republican, and wouldn’t have supported Roy Moore (or his Democratic opponent) on policy grounds even before the assault allegations came to light.

But even supposing the GOP came around to my own way of thinking — while still excusing and downplaying the sort of sexual misconduct Moore was accused of and Trump openly boasts about — I would not want to join.

This isn’t identity politics. It’s not because I’m a woman. I would have the same reaction if Moore’s alleged victims were boys as young as 14 or Trump bragged of grabbing unconsenting men by the crotch.

Charen argued you “cannot claim that you stand for women and put up with” this sort of behavior, and the same could be said of standing up for individual rights more broadly, because good character is linked to good policy.

Sometimes the link is this sort of direct connection: Your profession of respect for the rights of women or people in general falls flat when you’ve got a habit of sexually assaulting them.

And sometimes the link is more indirect, as I’ve argued before here at Rare: Without the discipline and integrity that comes of developing good character, who’s to say any president is up for the challenge of putting his policies into action? Who’s to say he won’t bend with the currents of the Washington swamp?

Voters who were excited about Trump promises like building a border wall, ending foreign entanglements, and repealing ObamaCare may know a little bit about that.