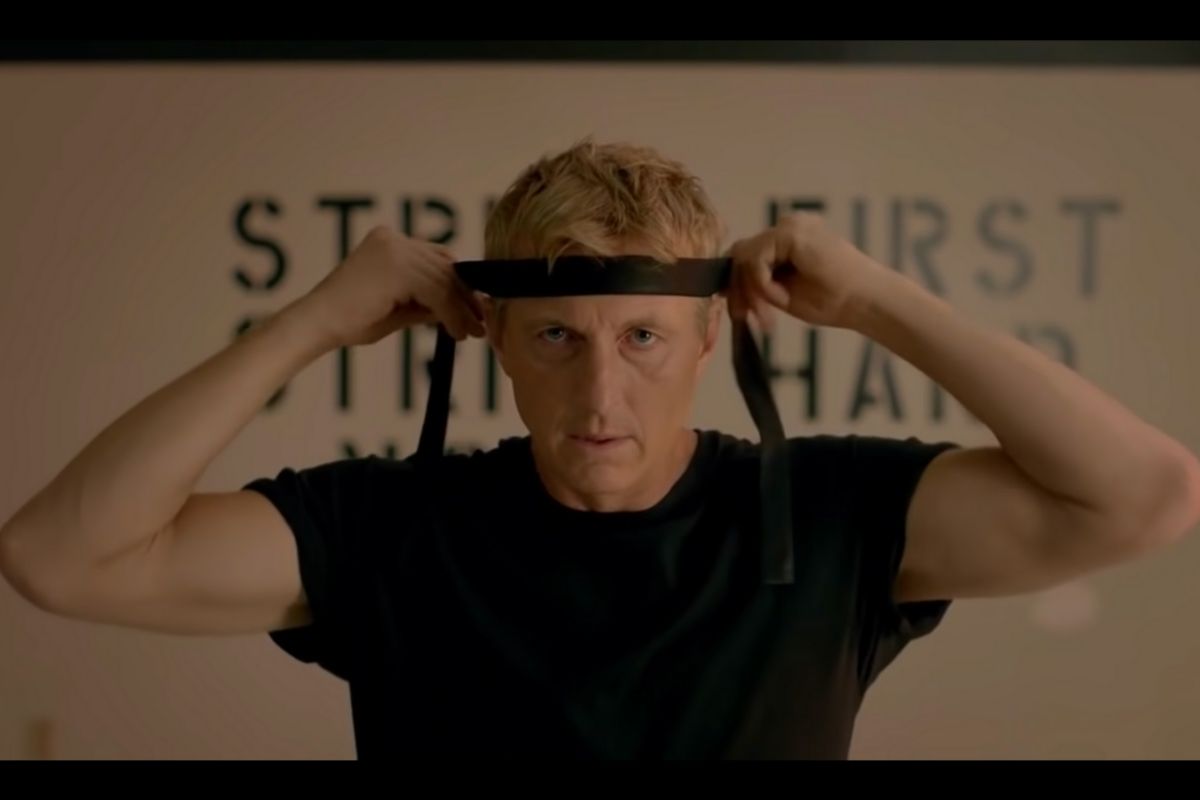 Cobra Kai should not be as good as it is. A Karate Kid spin-off series that updates the rivalry between 1980’s underdog Daniel LaRusso (Ralph Macchio) and the blondie bad boy Johnny Lawrence (William Zabka) might seem like the revival nobody asked for. But anyone who has even a passing familiarity with the original Karate Kid can find something to enjoy in this funny, cross-generational Netflix comeback. Our favorite part? Billy Zabka’s hilarious portrayal of Johnny Lawrence. The bully has grown into a misunderstood misanthrope with some killer lines.

Looking Back to ‘The Karate Kid’

Cobra Kai surprises viewers from the get-go by with a POV from anti-hero Johnny Lawrence rather than Daniel LaRusso, the famed Karate Kid. The last time we saw Johnny, he was deservedly getting his ass kicked at the All Valley Karate Tournament after tormenting his opponent for months. Evil sensei John Kreese (Martin Kove) had ordered his impressionable student to “Sweep the leg,” a cruel attack which inspired Daniel’s enlightened crane kick — right to Johnny’s face. (For anyone that can’t quite remember, don’t worry: there are lots of flashbacks in Cobra Kai.) But what many fans missed in 1984 was that Johnny was a victim too: of Kreese’s mind games, of a toxic culture that glorified male violence, and wait… didn’t Daniel technically steal Johnny’s girlfriend Ali (Elizabeth Shue)? Was Daniel’s high kick possibly illegal?!

This is the alternate interpretation put forth in Cobra Kai. We meet Johnny Lawrence as a self-pitying handyman who lives in a dumpy apartment and drinks away from the pain of his great karate failure with tall cans of Coors Banquet. When Miguel Diaz (Xolo Maridueña), the scrawny boy in Johnny’s Reseda apartment complex, needs self-defense training, you can bet the former champion steps up. Sound familiar? But Mr. Lawrence is no Mr. Miyagi. Johnny’s tactics are as messy and unprofessional as he is, drawing knowledge from his days back at John Kreese’s barbaric Cobra Kai dojo. Mantras like “Strike First, Strike Hard, No Mercy” doesn’t quite carry in 2020. But that doesn’t stop Johnny from gaining a following of geeks, desperate to prove themselves amongst the everyday brutality of American high school.

You might expect Ralph Macchio, reprising his most famous role, would inspire powerful nostalgia. You might expect to root for him, once again, as he takes on the brute Johnny Lawrence! But it’s William Zabka’s careful understanding of Johnny that imbues Cobra Kai with fresh vitality. Quite literally stuck in the 1980s, Johnny can barely work a smart phone. He calls hashtags “hashbrowns.” He eats Slim Jims for dinner and talks down to his dojo like he’s still some angry bully. But compared to golden boy Daniel, who now runs a successful car dealership, Johnny’s flaws feel natural. Daniel is boring! Johnny’s nemesis did his growing up in 1980s. Now it’s Johnny’s turn. And along the way, it’s impossible not to find this gruff alcoholic supremely lovable. As their warring dojos present ample opportunity to take sides, we are Team Johnny all the way.

1. When Johnny is completely savage to his students

“You can leave your asthma and your peanut allergies and all that other made-up bull**** at the door.”

2. When Johnny lets himself (occasionally) bond with Daniel

Johnny’s obvious crush on Ali is predictable but still cute.

3. But also when Johnny lets Daniel have it

4. When Johnny’s soft streak for Miguel shows through

He may be a terrible father to his biological son, but Johnny always shows up for his first student.

5. When Johnny Takes on the true villain: John Kreese

The second Martin Kove returned as John Kreese, he raised the stakes of Cobra Kai.

The first Cobra Kai season premiered on YouTube Premium in 2018. But the original series moved to Netflix last year and on January 1, 2021, the highly anticipated third season was released. Season three picks after a major cliffhanger and keeps up the colorful energy of previous episodes. But as the narrative expands to follow new storylines, I could honestly do with more Johnny Lawrence. Hashbrown Team Johnny forever.

WATCH: A Definitive Ranking of ?The Outsiders?