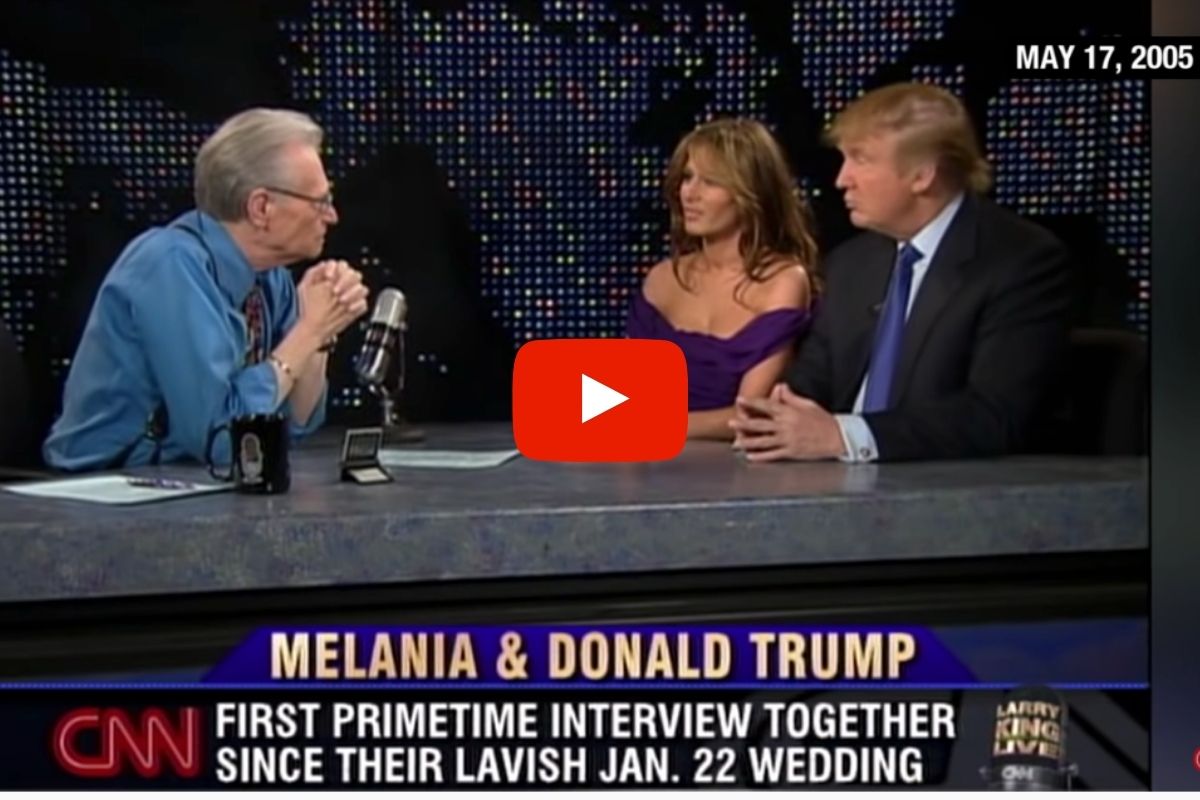 Aside from the few minor controversies, we didn’t hear very much from the wife of former U.S. President Donald Trump, First Lady Melania Trump during the couple’s time in the White House. The former Slovenia-born model has, for the most part, not distinguished herself as anything more than Trump’s wife. And even in that role, she wasn’t that convincing — remember when she disappeared for a month in 2018?

In fact, Melania has rarely appeared alongside the former president (or on her own) for comment or interviews since their 2005 wedding (And her whereabouts before then were also a source of great mystery.) But we stumbled one of their rare appearances: an interview on CNN’s Larry King Live just months after their wedding.

The couple was two smiling (if somewhat unconvincing) lovebirds when they appeared on King’s show at CNN Studios in Hollywood, Los Angeles. Clad in his iconic suspenders, the legendary Brooklyn-born broadcaster started the interview by asking how the two had met.

According to Melania, their fateful meeting occurred in New York City during fashion week in 1998. Donald chimed in, saying he’d actually been supposed to meet the supermodel sitting next to Melania.

“I said, forget about her,” Donald told the late-night talk show host. “Who’s the one on the left?” The three discussed the couple’s courtship, their engagement, Donald’s lukewarm proposal, their lavish wedding, and allegedly impenetrable compatibility.

The interview ended, for whatever reason, with the three discussing Donald’s many ex-women. “Do you worry about women and him being attracted to them?” the cable news interviewer asked. “No,” responded Melania confidently. “I don’t worry about that at all.”

What Else Do We Know About the Mysterious Former First Lady?

Perhaps the most press-shy First Lady in modern American history, Melania Trump remains a mystery to most of us (including, we’re willing to bet, her husband). We do know that she grew up in Sevnica, Yugoslavia (now in Slovenia) and moved to New York to model in 1996. Melania first met Donald Trump in 1998 at a fashion industry party in New York City. The two were married on January 22, 2005, at Trump’s estate in Palm Beach, Florida. It was his third marriage and her first.

We also know that Melania plagiarized a speech that Michelle Obama wrote back when Barack Obama was running for President. And we know that Melania received a piece of advice from her predecessor before taking over as First Lady.

?We will do whatever they need to help them succeed,? Michelle had revealed in an interview with Oprah. ?That?s one of the things I said to Melania: ?When you get to a place where you can digest all of this and you have questions? my door is open.’?

Melania did not pay it forward to the next First Lady, however. When President Joe Biden took office, Melania neglected to contact Jill Biden at all. ?Mrs. Trump should have invited Dr. Biden in for the traditional coffee,? Capricia Marshall, who worked as social secretary for the Clinton administration, told The New York Times. “Typically, she would come prepared with questions, she?ll meet and talk to the chef, the full-time residence staff and have an opportunity for them to break the ice. It?s a courtesy, but logistically it?s incredibly helpful. That didn?t happen.”

During the coronavirus pandemic, Melania has been uncharacteristically vocal. Her posts often encourage Americans to wear a face mask, directly contradicting her husband. ?I just don?t want to wear one,? the then-President said in a briefing the same day as Melania Trump?s mask pics posted on social media.

And What About Larry King?

For his part, Larry King, the beloved radio and television talk show host, died of a heart attack earlier this year at Cedars-Sinai Medical Center. His death was confirmed by Ora Media, the production studio behind the television shows like ?Larry King Now? and ?Politicking With Larry King”. King co-founded the web-based Ora TV along with billionaire Carlos Slim in 2012.

At the time of his death, King was 87-years-old. King is survived by his wife Shawn Southwick and kids: Larry King Jr., Cannon King, and Chance King.