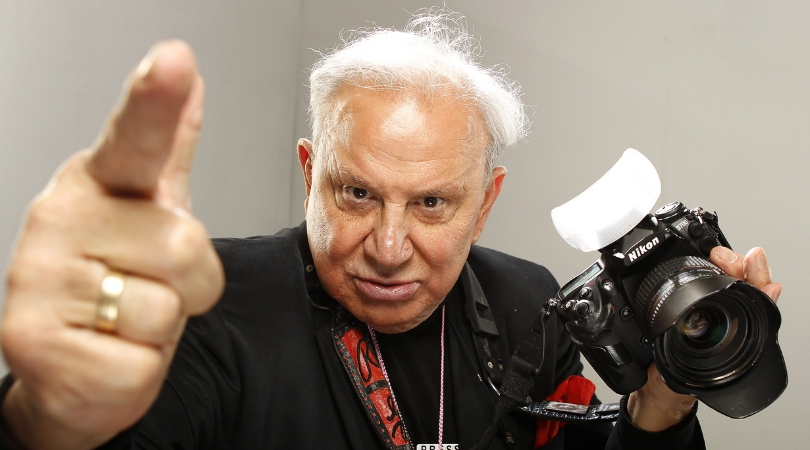 Ron Galella, also known as the “Godfather of the U. S. Paparazzi Culture,” is a controversial celebrity photographer from New York City, New York. He studied at the Art Center College of Design and is perhaps the most problematic, as he did manage to have many feuds with the celebs he photographed back in the day. For example, Elvis Presley’s bodyguards slashed his tires, Brigit Bardot’s security team hosed him, and Sean Penn wanted to handle the trouble maker himself and beat him up with his bare fists. Oh, and let’s not forget that Marlon Brando took the same route and punched out five of Ron Galella’s teeth in a punch to the jaw in 1973 and ended up breaking it. Tough times.

Not only that, but Galella became infamous for a trial, Galella v. Onassis in which Jackie Onassis ordered a 50-foot restraining order from him. He broke the restraining order four times and was threatened a $120,000 fine and 7 years in jail. Wild, I know. It’s crazy with how much you could have gotten away with back in the days, but these were the moments the celebrity photographer lived for. He even has a documentary about his life called, Smash His Camera, directed by Leon Gast.

Who is Ron Galella?

Being asked, "how much do your lawyers get," became a running joke while filming my documentary,"Smash His Camera," as the answer always was, "the lawyers get one third." As I have had a few lawsuits in my lifetime the lawyers cut never changes. Today during an interview I was asked this same question and chuckled the response, "one third." Immediately after the lawyer question I was asked, "who else hit me?” and I went on to explain in the summer of '73, while walking in Chinatown with Dick Cavett, Marlon Brando socked me in the jaw breaking 5 teeth. I sued Brando and won $27,000.00…all that money went into the repair of my jaw and teeth. But a tid bit many might not know is when Brando socked me he broke the skin across his knuckles and started to bleed. The next day Cavett picked up Brando at his hotel and had to take him to the hospital where Brando spent three days in bed fighting the infection in his hand. #brando #cavett #paparazzi #nyc #photojournalism

Ron Galella was the original Paparazzo. He dared to go up close and personal to celebrities and take those candid shots that everyone recognizes from tabloids. He got a rush from beating the cops to get a good picture and follow a star trying to shake him in traffic. Those hand reaching to cover the front of a celeb face photos? His trademark. Until it became a sort of joke where some celebrities started posing as if they were caught off-guard. He called it his “no pictures” pose.

He got candids and “candids” of all the biggest names: Mick Jagger, Steve McQueen, Frank Sinatra, Robert De Niro, Sophia Loren, Ali McGraw, and Elizabeth Taylor to name a few. He loved taking pictures of people who were famous, doing things that people who weren’t famous did. He called this a perfect picture. The paparazzo extraordinaire had many tricks up his sleeve to get those shots. From shielding his camera lens with the rubber guard, always wearing a suit for the camouflage to sneak into events, keeping wigs and boots in his car for a quick disguise. These are just a few that he practiced in a long career of snapping the famous.

Born in Bronx, New York, Ron Galella believes he inherited his obsession with fame. His mother was also obsessed with film stars. In fact, she named him Ron after a British actor named Ronald Colman. While in Korea, enlisted in the US Air Force, he learned to use a camera and became the photographer on base.

Later, he furthered his studies of photography at an art school in Los Angeles. His military experience is incorporated into his photo-taking as in- he’s crafty and intense. He once bribed a nightguard to lock him in a warehouse, allegedly infested with rats, just to get a secret picture of Elizabeth Taylor and her beau, Richard Burton.

“Windblown Jackie is my greatest photograph. I’m obsessed with #JackieKennedyOnassis and I think the whole world is too. Jackie was my golden girl in a golden era.” – #Ron_Galella Remembering #JacquelineKennedyOnassis, #Firstlady, #styleicon, who died May 19 1994 in Manhattan. She was just 64 years old. #restinpeace Here's the famous #photograph of Jackie Onassis sighted on 5th avenue in New York City Oct 7, 1971 "#WindblownJackie" #thestorybehindthepicture: I had finished photographing model, Joy Smith in the area. After, I thought I might as well go to Central Park, across from #Jackie's apartment and maybe I would get a lucky sighting. I saw Jackie leaving her building on 85th st heading towards Madison – we followed her and finally grabbed a taxi so as to not get noticed. "Follow that woman!" I told the cab driver. For once, Jackie's instincts were all wrong; without me asking, the cab driver honked his horn and Jackie turned right towards me. She did not recognize me as my camera was covering my face and she gave me the Mona Lisa smile. #DaVinci has his "Mona Lisa" and I have my "Windblown Jackie," my favorite, most famous photo of #JacquelineLee "Jackie" #Bouvier Kennedy Onassis. And it all happened within 15 minutes! For more than 400 photos of Jackie including this one on it's cover, you can purchase the beautiful #photobook "Jackie my Obsession" at rongalella.com and on Amazon. #meandmycamera #paparazzo #paparazzi #bnw #fashionicon #rememberingjackie #onassis #jackieonassis #jacquelinekennedy #jackiemyobsession #rongalellaarchive #coffeetablebook #paparazzi📷 #photographer📷 ©Ron Galella

His most photographed celebrity was Jacqueline Kennedy Onassis, which lead to the Galella vs. Onassis case. He first took a picture of her at an art gallery opening in New York. The best-known photo of Jackie entitled “windblown Jackie” was of the former first lady walking down 5th Avenue in New York with her hair in the perfect windswept moment. He shot the photo from a taxi.

By then she was familiar with the paparazzi, so it was expected for paparazzi to follow her around everywhere. But, things got a little out of hand for Galella and was quickly being referred to as ‘stalkerazzi’ by the world. Things got so bad that he even started camping outside her house, which is what ultimately led to the court case. He decided to fight, blaming his stalking on “his job” which was to take so-called candid photos at all times. How did it end? Well, he earned a large settlement from it, so some might say it was worth it.

Now, Galella is retired and is only shooting from time to time, seemingly uninterested by current celebrities. A sign of time passage and aging out of the new definition of what’s cool or hip. But his photos will always be a reminder of who he is. Whether you respect his chops or hate his guts, you will always remember him as the stalker paparazzi. And for someone obsessed with other’s fame, maybe that’s something he secretly wanted.