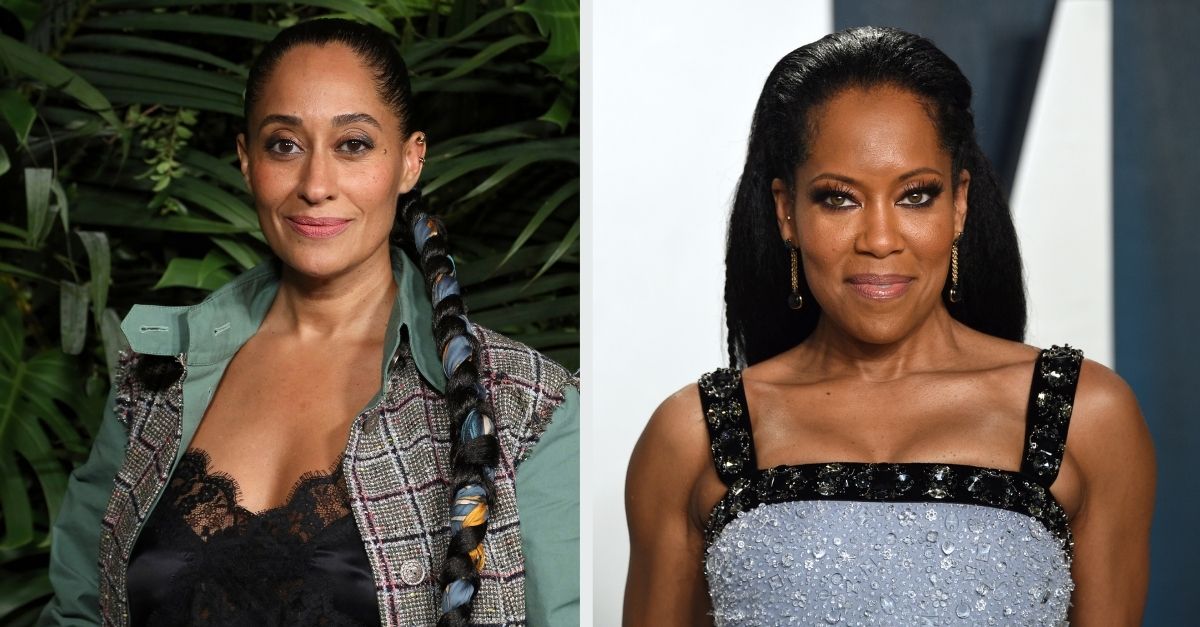 Oh boy, I have been waiting for this one! The Golden Girls got a little revamp, after Tracee Ellis Ross, Alfre Woodard, Sanaa Lathan, and Regina King decided to reimagine the hit 1980’s comedy series. Taking part in a ?Zoom Where It Happens? virtual watch party, the sitcom had an all-black cast for one-night as part of a charitable performance. According to the page for the event, the virtual production was set to support the Color of Change organization.

The event read, “In an effort to further engage our community and drive change, all you need to do to enjoy this evening is sign up to receive messages about how you can make a change during this election! This event is in partnership with Zoom, and the first episode is spotlighting and supporting Color of Change – the nation’s largest online racial justice organization.”

The original Golden Girls ran on NBC from 1985 to 1992 and starred Bea Arthur ad Dorothy, our favorite actress Betty White as Rose, Estelle Getty as Sophia, and Rue McClanahan as Blanche. The roommates lived quite an interesting life in Miami, and safe to say the TV show is now a beloved memory for all of us and has gained more popularity in syndication.

The Golden Girls received critical acclaim throughout its run winning several Awards including the Primetime Emmy Award for Outstanding Comedy Series twice, three Golden Globe Award for Best Television Series – Musical or Comedy and each of the four stars received an Emmy Award. Back in 2013, TV Guide ranked The Golden Girls number 54 on the list of the 60 best series of all times. The Writers Guild of America placed the Golden Girls on number 69 back in their list of ?101 Best Written TV Series of All Time.?

A hilarious night with @cioci47 watching this stellar cast of Black excellence in the #ZoomWhereItHappens as they take on @goldengirls, all to help @colorofchange promote the 2020 United States Census in underrepresented communities. Thank You @lenawaithe @gpbmadeit @realalfrewoodard @traceeellisross @sanaalathan @iamreginaking @ijessewilliams @finally_aaron For Being a Friend! . To all my American friends – especially Black, Indigenous, and People of Colour – please fill out your census ASAP! It only takes ten minutes and the info you provide is vital to getting support and representation for yourself and your neighbours. Plus your info is strictly confidential and there are no citizenship questions, so you’re safe no matter how long you’ve been in the country, because your voice still matters. Complete it online at 2020census.gov or by phone at 844-330-2020. Be part of the change and fill out your census now! 📝

As far as the “new cast” for the mini reboot, Ross is one of the best comic actresses and announced through her social media that she would join her fellow actresses, sharing an iconic poster from the original series. The Live exercise is said to be hosted by ?The Chi? creator and executive producer Lena Waithe, while Gina Prince Bythewood is scheduled to direct it.

Ross is no stranger to long-running sitcoms after she also starred in Girlfriend’s, which was so effectively produced by Kelsey Grammer from September 11, 2000, and February 11, 2008. Since 2014, Ross has played the starring role of Dr. Rainbow Johnson in the hilarious ABC comedy series Black-ish. Her work on the series earned her three NAACP Image Awards and a Golden Globe award for Best Actress- Television Series Musical or Comedy. She also received nominations for two Critics Choice Television Awards and for Primetime Emmy Award for outstanding lead actress in a comedy series. In 2019, she went off to co-create a prequel to Black-ish spinoff titled Mixed-ish.