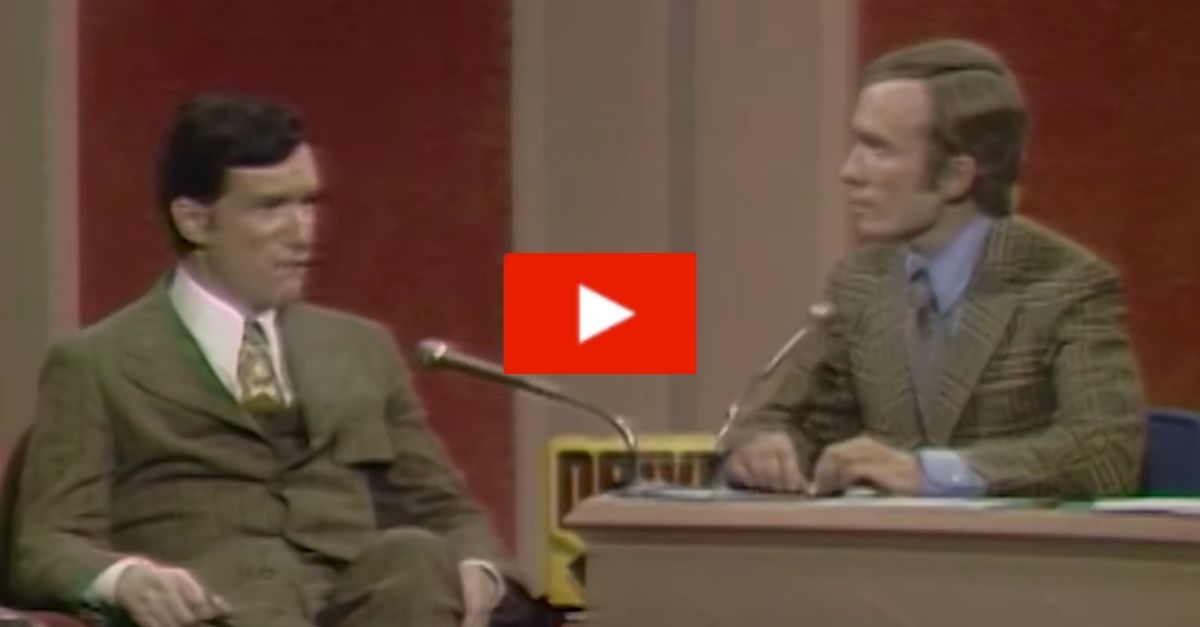 One of the more controversial episodes of the Dick Cavett Show featured a three-person interview/discussion with the late creator of Playboy Magazine, Hugh Hefner and Dr. Rollo May, the famous American psychotherapist who wrote the influential book Love and Will. And with topics regarding sexuality and the inner workings of the human mind and subconscious, there are always going to be people who feel a certain type of way.

Before the tv show’s host, Dick Cavett, introduces Dr. Rollo May on stage, he and the Playboy founder are discussing the concept of airbrushing the Playboy playmates, to which Hefner slightly contradicts himself in my opinion. He mentions how they slightly re-touch the pictures to make the Playboy bunnies “look more attractive” to which he immediately justifies it with how he does very little airbrushing of the actual pictures. Personally, it looks like he’s defending how they bring out the colors in the pictures they take of the women to make them look better while also trying to portray that they don’t necessarily support editing for the purpose of making people, again, “look more attractive.”

When Dr. May comes out, they start discussing his book Love and Will, and I’m sorry to say (for those of you who are psychology nerds), that although his points are pretty interesting, they also sound a little crazy. He talks about how because artists “speak out of the unconscious” are similar to “the neurotic” in which they’re able to predict what’s going to happen because they, again, “speak from the unconscious.”

They get into Dr. May’s perspective on Playboy and that’s where things get really interesting. Dr. May basically calls Playboy out in explaining that they misrepresent the idea love saying, that the, “faces of these lovely girls have no expression,” and that it makes no sense to have, “love without commitment,” and, “love without responsibility.”

Cavett intervenes as a talk show host should to keep serious topics like this more light-hearted, saying, “depends on the neighborhood you live in.”

Hefner continues defending the Playboy Club by continuing to explain how the magazine tries to tell something about her as a general human being, attempting to slightly change the perception of Playboy since he certainly felt some type of way about Dr. May’s criticisms. He furthermore talks about how what sets Playboy apart is the attempt to humanize the complete sexualization of the human being.

As Dr. May disagrees, cheers and applauses loudly and clearly from the crowd. Although Cavett tries to balance the favoritism, to me, it seems like not many people believe what Hefner is feeding the crowd. Hefner interrupts Dr. May, again defensively before he feels like his reputation is tarnished anymore, and talks about how he does believe that sexual intercourse should include emotional involvement, as opposed to just playing it cool. He continues to explain that Playboy also explores the reality that there also is a time for exploration and play, which can be important before getting ready to settle down.

As Hugh Hefner defends Playboy’s portrayal of women, it’s hard to make a firm opinion on topics like these considering how modern times have changed. Hefner talking about “the girls next door” concept is a peek into the women’s liberation that we now see in today’s society.

Now I wouldn’t necessarily hit the Playboy mansion or Playboy’s Penthouse ever, nor would I hate on Dr. May’s insight either. However, good ol’ Hef might actually have a good point. Female celebrities in Hollywood have also helped a shift in a sexual revolution in the United States regarding women, and even Dr. May contributed to that argument with his words on artists and neurotics.