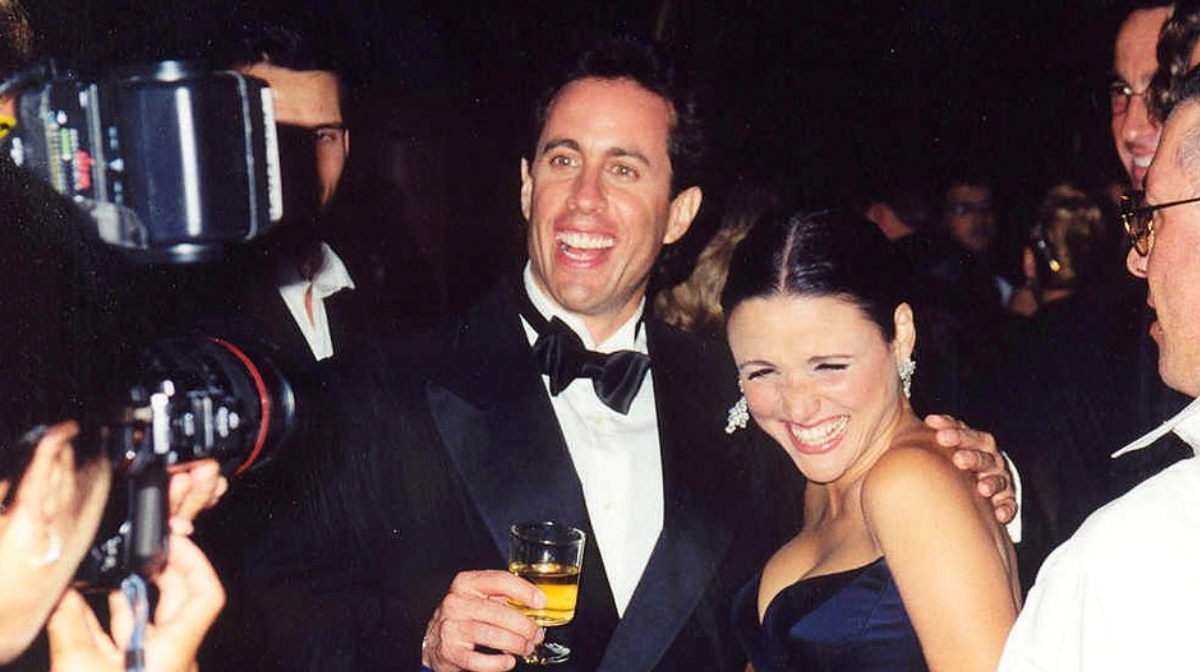 Jerry Seinfeld and his wife Jessica have been married for longer than most couples in Hollywood. The two have raised a family and grown their personal careers to impressive heights, and while everything looks sweet now, the beginning of their story is a little bit spicy.

Jerry Seinfeld and Jessica Seinfeld (born Nina Sklar) just celebrated 20 years of marriage. They have a family and successful careers. Jerry’s wife Jessica runs a foundation working to end poverty called Good+Foundation, formerly known as Baby Buggy. She is a philanthropist and has penned several cookbooks including Deceptively Delicious: Simple Secrets to Get Your Kids Eating Good Food. Jerry’s comedic career continues to soar as he travels for stand up gigs.

His Netflix show, Comedians in Cars Getting Coffee, has been a hit for years. Their kids Sascha, Shepherd, and Julian are all teens and are living a pleasant, “middle-class” life. The Seinfelds want to set an example of a hard-working lifestyle for the kids to follow, but they probably know they’re forever rich. Either way, aren’t they a cute family?

Happy Valentine’s Day to my loves who are usually pretty cooperative except when it comes to family photos before important life events. I definitely went full velociraptor on them after this photo. 💘Miss you Sushi at school 😩😭😍💘❤️

Some Called It A Rocky Beginning

And by juicy I mean borderline problematic depending on who you ask. If you ask Jessica Seinfeld’s first husband, producer Eric Nederlander from when she met a single Jerry Seinfeld he would say:

“I was manipulated, misled and completely caught off guard by Jessica’s infidelity. Jerry and Jessica have no respect for decent values. They deserve each other.”

Which is exactly what he did say in 1998 shortly after his wife of four months divorced him. See, when Jessica and Jerry met she was newly married to Eric Nederlander. As they had been married for two short months and had just returned from their honeymoon. Jessica, who was working as a publicist for Tommy Hilfiger. She met the comedian and star of his self-titled megahit sitcom Seinfeld by chance. The two met on the Upper West Side of Manhattan at the Reebok Sports Club in New York City. At first, it was nothing. He approached her at the gym (which is the biggest faux pas being ignored here) and she was polite. Then he made her laugh and soon they were dating. In Jessica Seinfield’s words, her relationship with Eric Nederlander was “irreparably broken” before they’d even tied the knot. She’d been too afraid to leave.

Happy 20th Anniversary to Jerry & Jessica Seinfeld!! Love you guys!! I was so blessed to photograph their wedding and spend time with their beautiful family. I had just started shooting digital cameras at that time, so after the ceremony I uploaded the photos to my laptop and left it on the bar so the family could view the photos. #CoolestFamilyEver

A year after meeting the two were engaged. They had a quiet ceremony in New York City but kept the location pretty secret considering the hate storm that continued to brew about them in the media.

The Seinfelds may seem to have had a messy start, but they have a wonderful life together and clearly made the right choice.